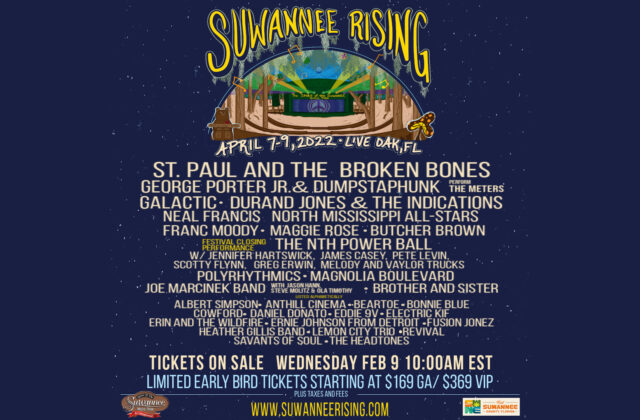 From the ashes of the fading pandemic, Suwannee Rising Music Festival emerges like a phoenix of hope soaring above the clouds with our dreams for a safe and fun filled festival!  On April 7-9 Rising lands amongst the moss filled branches in Live Oak, Florida at the Spirit of Suwannee Music Park (TICKETS HERE)!  Coming in hot for Suwannee Rising 2022 is the St. Paul and the Broken Bones bring their soul and funk from on high.  George Porter Jr. & Dumpstaphunk performing the music of the Meters,  Galactic brings the funk while Durand Jones and the Indications provide the soul for the weekend.  Neal Francis will be tickling the keys while North Mississippi All-Stars rip solo after solo on their guitars.  Closing down the festival is The Nth Power Ball featuring singer and trumpet player Jennifer Hartswick, James Casey, Pete Levin, Scotty Flynn, Greg Erwin, Melody and Vaylor Trucks!  The fun does end there, Joe Marcinek Band will be featuring The String Cheese Incident’s Jason Haan and Brothers and Sisters will be playing the music of the Allman Brothers Band! Check out SuwanneeRising.com for more information and ticket sales!

Tickets On Sale Wednesday, February 9 at 10 am EST

Suwannee Rising Music Festival has released the artist lineup for the 2022 edition of the festival, returning for its third year to its home at the beautiful Spirit of the Suwannee Music Park (SOSMP) in Live Oak, Florida on April 7-9, 2022. Suwannee Rising will offer a wide-reaching mix of nearly 30 live artists on two stages for a three-day weekend filled with jam, funk, jazz, soul, rock, blues music, and more. The 2022 festival will feature a headlining set by St. Paul and the Broken Bones, the eight-piece soul band from Birmingham, AL, who have just released their fourth
album The Alien Coast, plus a top billing of Durand Jones & The Indications, the retro-soul outfit from Bloomington, IN whose most recent record, Private Space expands into funk and disco.

Kids 12 and Under Free
Admission for Kids 12 and under is free when accompanied and supervised by a parent or legal guardian.

About Spirit of the Suwannee Music Park:
Set in the midst of 800-acres of Spanish moss-draped oak and cypress along the black Suwannee River and complete with the largest bat house in the southeast U.S, Spirit of the Suwannee Music Park is one of the most beautiful live music venues in the country. The park also offers guest comforts including a general store, full-service restaurant, free showers, indoor bathrooms, and water stations.