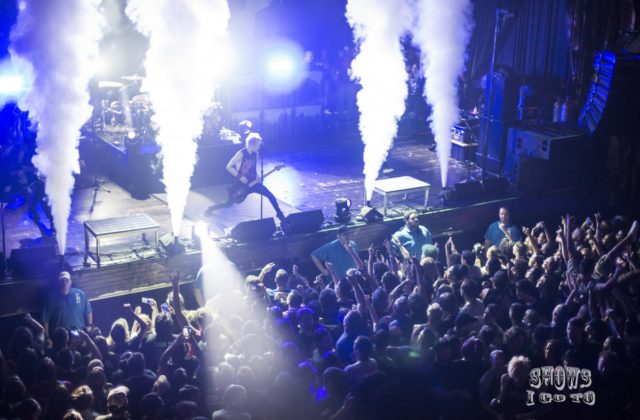 Even Jesus has to crowd surf at Sum 41.”

When Sum 41 released Does This Look Infected? 15 years ago, it was a huge shift from All Killer No Filler. It was heavy, loud, and one of the albums you listened to to prove to your friends you were awesome. To hear that the band was going on a tour to perform Infected in its entirety, was a dream come true.

As you walk into the House of Blues, you nearly become face to face with a large white curtain draped across the stage; completely obstructing your view. As time passes, the crowd gets restless with anticipation; smacking around a random beach ball across the venue, all the while singing along to Papa Roach’s “Last Resort,” blaring through the speakers. Suddenly, the music cuts and the lights go dark. Vibrant disco lights dance across the curtain.

This is the moment we’ve waited for.” 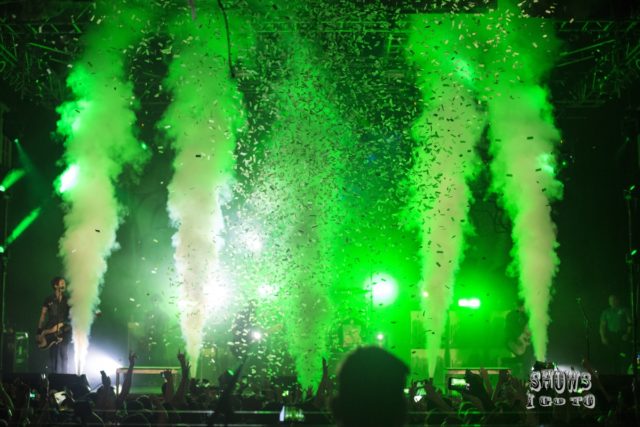 The instant the curtains drop, the energy in the room goes from an 11 to a 50. They opened their high energy set with “The Hell Song,” the perfect song to open the tour. Within seconds of the song, smoke was shooting in the air, confetti was flying through the air, and members of the audience were already moshing. Halfway through the song, they invited members of the audience up onstage to stand alongside them. The mosh pits opened up even more as the night went on, the crowd thrashed to heavier songs like “A.N.I.C” and “Never Wake Up.”

The energy and spirit you’d find at a punk show was well alive in the room that night. 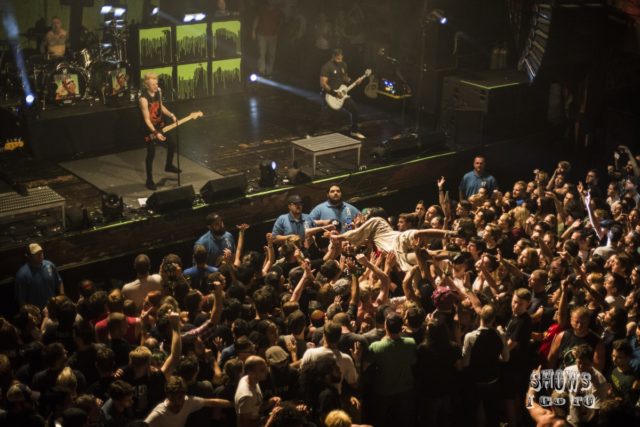 Deryck Whibley addressed changes to the song order, “We changed it up cause we wanted to try something different. It’s more fun that way and you can do what you want on your birthday!” Whibley saw this show as a birthday party – with giant party balloons included, instead of an anniversary tour, the song order change was the perfect birthday cake, allowing for a new take on the album for older fans and newer 41 fans to get an exclusive listen to an album that they may not be as familiar with. The icing on the cake is the non-infected songs and little tidbits sprinkled throughout the performance. In true punk fashion, the band did fast paced short covers of Black Sabbath songs, along with the ultimate birthday gift of a full cover of Queen’s “We Will Rock You.” 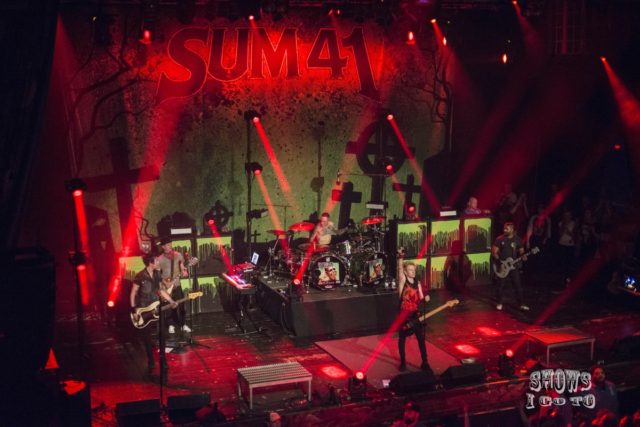 Before starting “Fake My Own Death,” Whibley took a brief moment to address the song from 2016’s 13 Voices. The singer said “FMOD” is the completed song born from brainstorming for Infected? a dozen years earlier, before he and Dave Baksh shredded their guitars like no one’s business. Frank Zummo’s drum cover to Linkin Park tracks was a perfect tribute moment to the late Chester Bennington. Keeping up the energy he had throughout the night, Zummo tore it up on the drums, while playing along to brief snippets of “Faint,” “One Step Closer,” and “Rebellion.” 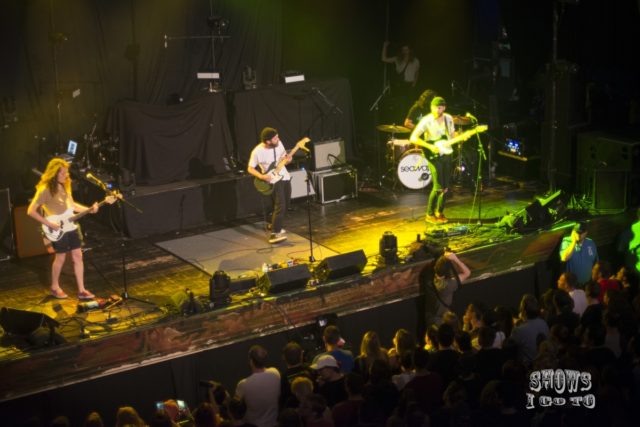 Opening act Super Whatevr, started the show with a solid set. The band was mellow and down to earth. When playing songs “Telelelevision” and “Someone, Somewhere, Somehow,” all four members of the band released an impressive burst of energy, dancing around the stage and having as much fun as the audience. Although they’re still relatively new, Super Whatevr shows promise, and is certainly a band to keep watching. It wouldn’t be surprising in the slightest to catch them headlining a tour in a few years.

So, the answer to Sum 41’s 15 year old question: YES, guys, it still does look infected, and that’s exactly the way we want it.” 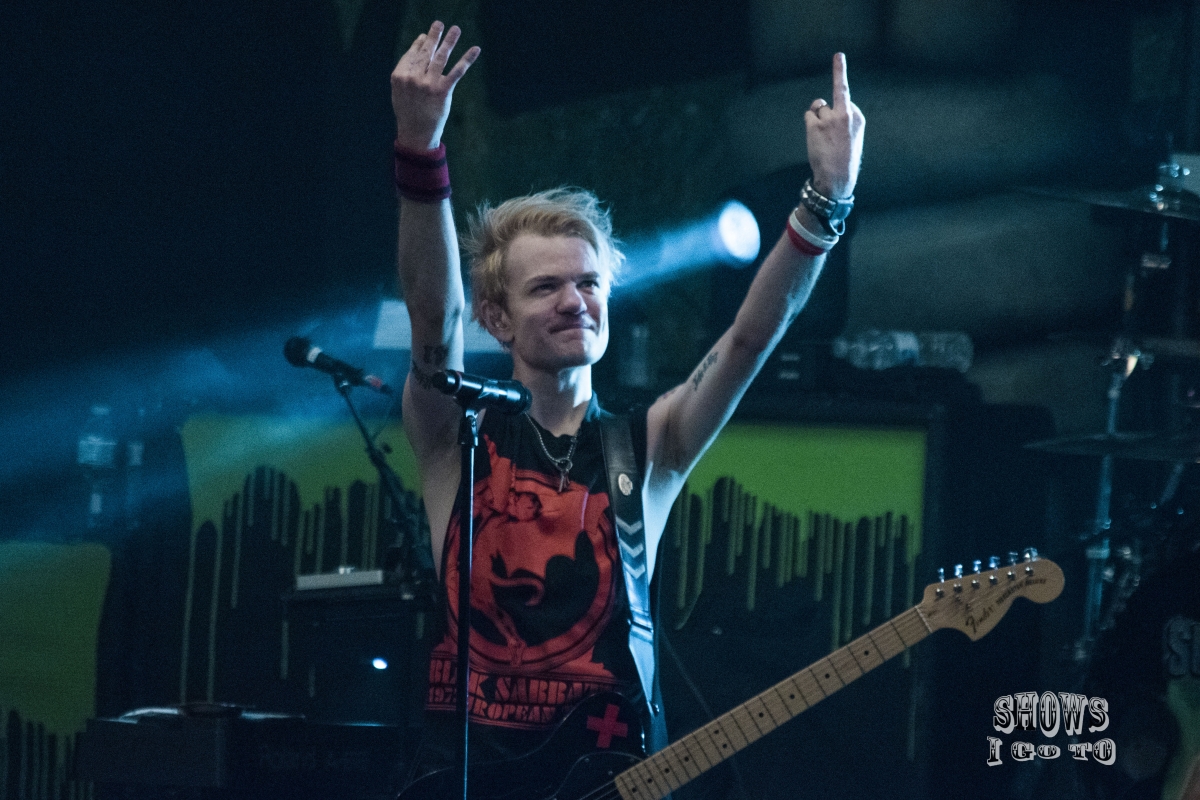 Whibley flipping a loving bird to the fans @ House of Blues in Orlando. <3

Their performance leaves you with not only an eye and ear infection, but a sore throat by the time you finish singing along to all their songs. I personally began losing my voice during “Still Waiting”. Hopefully, I’ll be fully recovered in time for next year, because if last night was anything to base next year’s tour off of, then I’m going to need a new larynx. 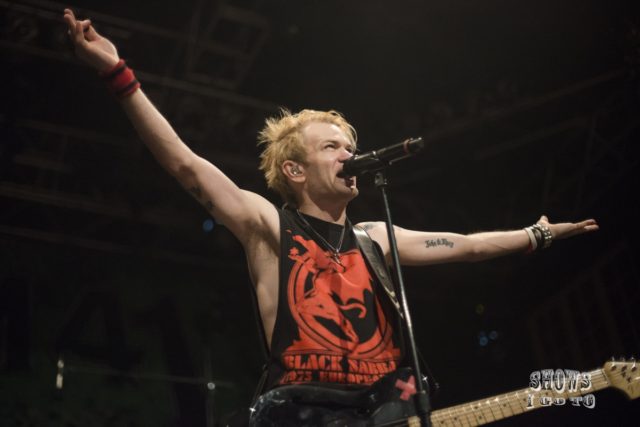