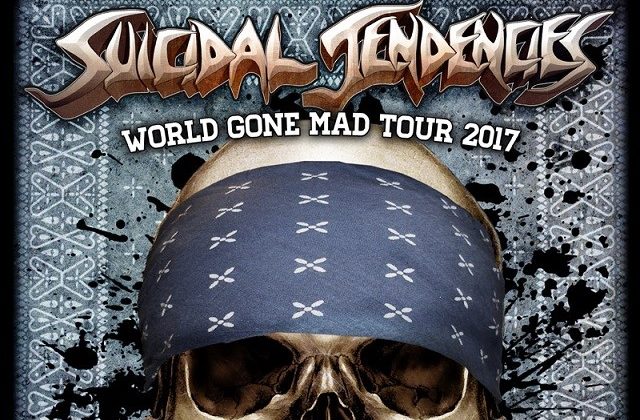 The State Theatre in St. Petersburg, FL on March 5 is sure to be one continuous mosh pit as Suicidal Tendencies, the legends of crossover thrash and hardcore punk, unleash their “World Gone Mad Tour 2017,” shattering the stillness of what would normally be a quiet Sunday evening downtown. Crowbar and Havok open the show with all three bands touring in support of recent releases (Havok’s comes out five days after this show). Crowbar is known for their slow and heavy sludge/doom/stoner mixed with some punk style while Havok is pure all out thrash.

Enter below to WIN 2 TICKETS to the show, thanks to No Clubs Presents! The music, style and attitude of Suicidal Tendencies has and continues to be a huge influence in the world of punk and metal musicians and bands to the point where all four bands known as ‘The Big 4’ of thrash metal acknowledge that Suicidal Tendencies was one of the bands that influenced their sound. While Suicidal Tendencies have gone through multiple lineup changes in their near forty year career, founding vocalist Mike ‘Cyco Miko’ Muir leads this current iteration which features Dave Lombardo of Slayer fame on drums. World Gone Mad, released on September 30, 2016, is their twelfth studio album and Muir has hinted that it may be the band’s last. While not saying this is their farewell tour, if you are a fan and have never seen them live take this opportunity to do so. This is sure to be a great show and being an intimate venue, tickets are likely to sell out given the band’s cult-like following so get yours today!

Want to WIN 2 TICKETS to Suicidal Tendencies, Crowbar & Havok at State Theatre in St. Petersburg, FL on Sunday, March 5, 2017?! There are several ways to enter!*