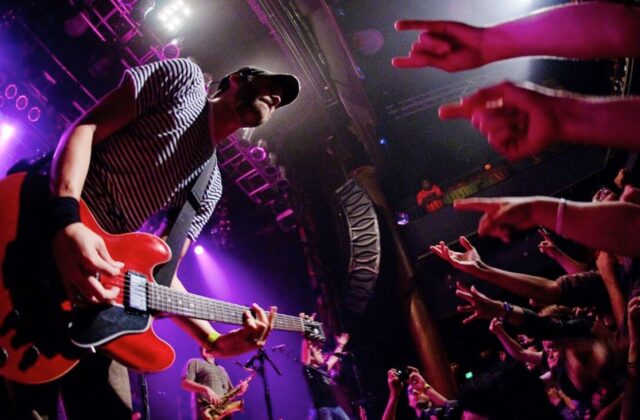 Oi! One of my top three bands of all time is coming to town for Two Florida shows, and you can bet I’m excited! Streetlight Manifesto, The Ska Band Kings, is on its way to the Jannus Live in St. Pete on September 02 (TICKETS HERE!) and Hard Rock Live in Orlando, FL on September 03 (TICKETS HERE!). I could not be a happier person/fan/ska-music lover. Streetlight Manifesto has changed how I view music, live shows, and life in general. And I get to see them again and share a bit of my story with you before you hopefully win tickets below. These shows are extra special with our friends Catbite providing opening support! Streetlight Manifesto was introduced to me a bit later than many other influential bands in my life, but I definitely know they came when the time was just right. I was working for a restaurant at the time and my faith in music had begun to decline. I had been to quite a few shows at that point in my life and I was really getting tired of seeing and hearing the same kind of bands (mostly punk, reggae, and metal shows). One of my best friends, who also worked with me, played this band for me. At first sounded totally like just another punk band, but then I realized, the horns … my God, the horns.

I had listened to some ska bands with horns, but nothing like what Streetlight Manifesto had to offer. The harmonies, the way the horns really dictated how the song progressed, and how they were complemented perfectly by an excellent ska band behind them. Then, there are the lyrics. Streetlight Manifesto, especially Tomas Kanolky, the lead singer/guitarist, dedicates each album to a theme, and every single song on each album discusses different sub themes.

And finally, there is their live show. Streetlight Manifesto is not just a band, it is a moment that we are privileged to be a part of. These guys are one of those bands that are so much better live than they are on the albums, and that is what I really appreciate about them the most. You can tell every single person on that stage has a personal connection to each song and play their heart out the entire show, despite the fact they have been doing this for over 12 years.

The passion, the strength, and the magnitude of this band is overwhelming. And trust me, you will hate yourself for not going to see this band. 🙂 So join me and together we will ride the fourth wave into utter bliss. Jannus Live in St. Pete on September 02 (TICKETS HERE!) and Hard Rock Live in Orlando, FL on September 03 (TICKETS HERE!)

We’ve teamed up with AEG Presents Southeast to give you a chance to WIN (2) TICKETS to STREETLIGHT MANIFESTO at Jannus Live in St. Pete on September 02 AND Hard Rock Live in Orlando, FL on September 03, 2022!