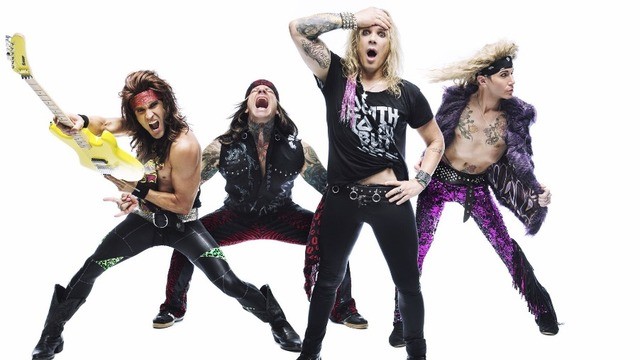 Ticket Giveaway: Steel Panther | Not for the Easily Offended! | Coming to The Beacham Orlando | Thursday May 7, 2015

In 2013, I covered a music festival in Jacksonville where I watched some of the worst bands ever perform live. With the exception of the copious amounts of alcohol my friend and I drank, the weekend was a complete bust until Steel Panther hit the stage on Sunday afternoon. According to my friend they were “kind of a fuck around band,” which had to be better than Papa Roach, right? Within minutes of Steel Panther taking the stage we saw more mammary glands than a Mötley Crüe show.  At first glance, Steel Panther looks like your average 80’s cover band but they is so much more to them. They write all original, yet dirty, songs in the style of an 80’s hair band (Check out an uncensored version of their power ballad “Community Property” below).

Steel Panther got their start under the name Metal Skool in the early 2000s playing covers on the Sunset Strip. Word of mouth spread and they quickly gained a huge following in Los Angeles. They changed their name to Steel Panther and were soon writing their own original songs like “Asian Hooker,” “Eatin’ Ain’t Cheatin’, ” and “The Shocker.” The band just released their fourth studio album entitled All You Can Eat. Here is the video for one of my favorite songs from that album called “Gloryhole.”

Steel Panther will be making a stop at The Beacham on Thursday, May 7, 2015 (Win tickets below). I saw them last year at House of Blues at Downtown Disney and it was seriously some of the craziest shit I have ever seen at a show. If they can get away with what I saw at Disney, who knows what they have in store for The Beacham? I can promise that this will be the dirtiest, funniest show you have ever seen.

Want to win 2 Tickets to STEEL PANTHER at The Beacham in Orlando, FL on Thursday, May 7, 2015?! There are several ways to enter!*

Get Tickets to Steel Panther In Orlando HERE! (You can always give them to someone else if you win)