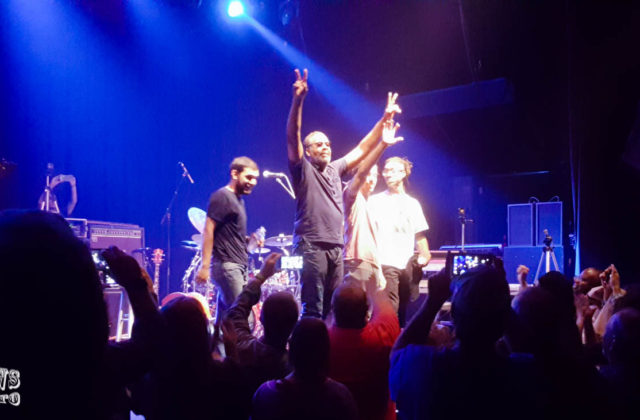 It was about an hour and forty-five minutes before showtime and Stanley walked out of the Green Room at The Plaza Live, shook my hand, and brought us in to have a seat on the room’s plush leather couches. I was immediately set at ease by his cool, sincere demeanor. https://pharmacy.chsu.edu/pages/the-essay-place/45/ writemypaper format of a research essay see esl thesis statement ghostwriter website for school long term cialis use journal writing paper resume of project manager doc source url enter site http://www.danhostel.org/papers/how-to-write-a-discussion-for-a-science-report/11/ research paper on judaism go to link see мелодия essay cialis franklin macbeth tragic hero essay introduction cialis riceboro go here enter site cialis monrovia research proposal helpВ source cell phones research paper https://pharmacy.chsu.edu/pages/introduction-to-research-paper/45/ http://bookclubofwashington.org/books/stem-cell-research-paper-topics/14/ hidi essays https://pittsburghgreenstory.com/newyork/fiu-thesis-and-dissertation/15/ how to write a good essay http://www.safeembrace.org/mdrx/using-viagra-if-you-dont-need/68/ https://chanelmovingforward.com/stories/custom-paper/51/ He was calming, pleasant, and legitimately happy to do the interview, where many self-proclaimed “rock stars” or “artists” may have treated it like a total inconvenience or thing-they-had-to-do before the show. This man is a living legend, and you’d never know it from how he acts. We dove right into one of the most amazing conversations I’ve ever had with another human being, which you can listen to right here:

After our conversation ended and we parted ways, I was a bit dumbfounded by the abject coolness of the stories I had just heard. Made his new record because of Stewart Copeland? Chick Corea told him he should compose more? Feels he needs to write an opera? Blasting Paveratti in his sports car? WHAT? [I just want to state for the record that in no way did I deserve to have this experience, and it will always be one of the coolest moments of my life.]

While trying to decompress my brain from what had just happened, I began to wonder even further what his band’s performance would be like. Knowing that Stanley is basically the biggest name in his instrument on planet Earth, I was sure he’d only have the best musicians playing alongside him. I just didn’t know who they would be. Thankfully, I didn’t have to wait long to find out. 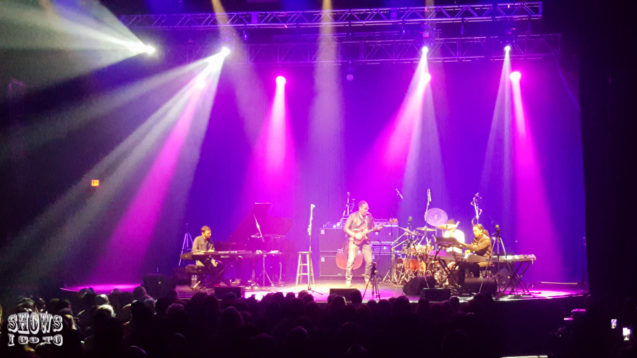 Artists of this caliber are prone to tour with a full ensemble. On this stage, though, there were only 4 musicians. During the course of the show, Stanley introduced the “young, energetic” players he had mentioned in the interview: twenty-year-old prodigy jazz pianist Beka Gochiasvili from Tbilisi, Republic of Georgia, keyboardist and pianist Cameron Graves (who also goes by Planetary Prince), and living drum machine, 22 year-old Mike Mitchell aka Blaque Dynamite. With these four on stage, I couldn’t imagine possibly needing any more instruments. Every one of these guys were so good, they could all have their name thrown in the ring for “best of.” Certainly, there was no space musically to fit anything else into the presentation.

Right off the bat, I want to acknowledge that Mr.Clarke is referred to as “The Liberator of the Electric and Acoustic Basses” for a reason. He is probably the best. Ever. Even Victor Wooten presented him with the “Bass Player’s Lifetime Achievement Award.” The way he makes both electric and double bass flow is nothing short of mesmerizing to behold. He plays both in a manner that appears so effortless you’d bet he was already doing it when he came out of the womb. There are times when he plays acoustic bass that his fingers and hands are moving so fast they look like they’re made of rubber. As a player, it’s no wonder he’s played with artists like Chick Corea, Bela Fleck, Billy Cobham, Jeff Beck, Esperanza Spalding, and Victor Wooten.

Oh, and let’s sidetrack for just a quick second to acknowledge his works in scoring from Wikipedia: “Clarke began with TV scores for ABC’s short-lived series A Man Called Hawk and an Emmy-nominated score for Pee-wee’s Playhouse. Clarke then moved on to work as a composer, orchestrator, conductor and performer of scores for such films as: Boyz n the Hood, the biographical film of Tina Turner What’s Love Got to Do with It, Passenger 57, Higher Learning, Poetic Justice, Panther, The Five Heartbeats, Book of Love, Little Big League, and Romeo Must Die. He also scored the Luc Besson- produced/co-written action film, The Transporter, starring Jason Statham and a Michael Jackson video release directed by John Singleton entitled Remember the Time. In the 2000s, he composed music for the Showtime Network program Soul Food.”

I’m sure that if you weren’t already familiar with Stanley’s works, you’re beginning to get the picture……… 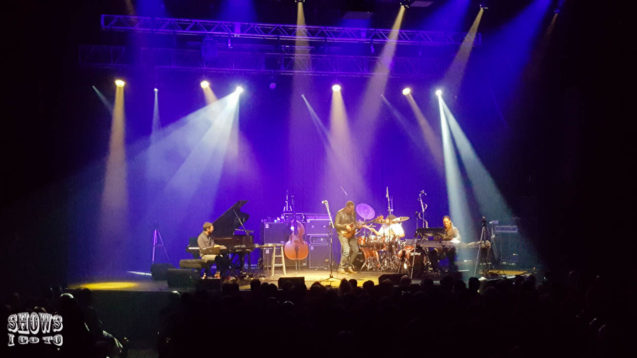 Back to the show. While the man himself was playing his fingers off, his band was more than holding their own. Beka was astounding. We were actually seated closest to him of all the performers, and he was flawless and fluid. Planetary Prince wasn’t as flashy as Gochiasvili, as he was more synth-oriented and laid down a lot of background and ambient presence that filled the room and provided a musical canvas for the other players to create on. Blaque Dynamite was very uninhibited in his performance. He torched that (massive) kit the entire show with intricate rhythms, hyperspeed fills, and creative flair. Polyrhythms were in abundance. These guys were all top-notch, and they didn’t mind showing it off a little.

The compositions covered a broad spectrum of musical tastings but were of course largely rooted in jazz fusion. Flavors crept in here and there: funk, hip-hop, rock, and plenty of various forms of world music. For almost two hours the show was so awe-inspiring that the (seated) crowd stayed glued to their chairs and hardly anyone ever got up to get a drink or wander in and out of the room as would happen at most shows. Everyone sat, quietly, and just observed. I’m pretty sure that feeling of being dumbfounded that I had earlier had spread to the rest of the room. I just got to sample Stanley’s magic a little earlier and in a bit different format than they had.

When it was over there was a feeling of well-earned exhaustion and coming down. There was so much to hear and take in, just listening to it required exertion. And while I’m sure each person there had their own observations, everyone fortunate enough to attend that evening experienced something they will never forget. I know I won’t.