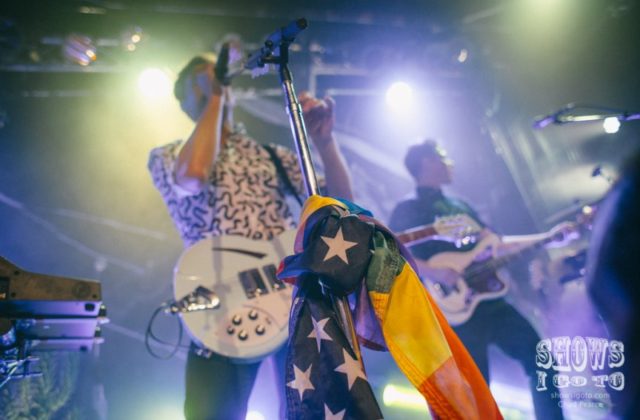 [Editor’s Forward: For many of us, St. Lucia was our first concert back after the shootings. I went to two concerts Saturday night but it hadn’t fully sunk in. Then, after Sunday, I was completely derailed. I think it was on all of our minds — are we safe? I know it crossed my mind. I found myself standing still at one point, in the pit, watching Jean-Philip lose himself and lean backwards, as he howled at the ceiling. I thought, what if someone took his life right then — when he was in complete euphoria. What if… Then, I thought about me, and if someone took my life while I was standing still, making a depressing observation. I looked around at the beautiful people dancing around me. I looked back at Jean-Philip. Everyone was being themselves. Everyone was shining together. It was at that moment I realized we’re strong — we’re so, so strong. Fuck fear. Love fills our huge heavy hearts tonight and nothing can stop it.] 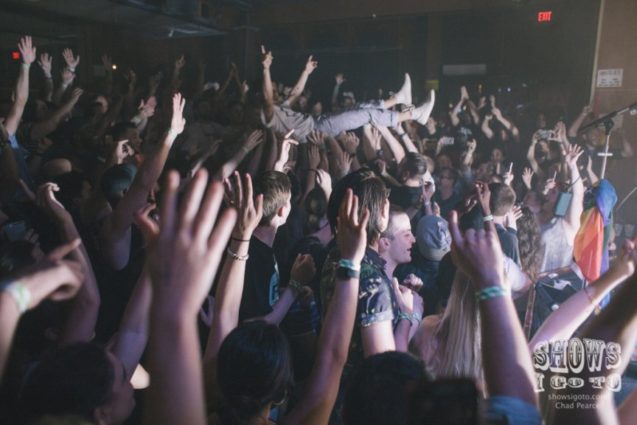 Fear and strobe lights are an odd combination. At some point, you’re not sure which came first but you know you’re a little more unsettled than you were the moment before. It’s Wednesday and the bells are still ringing in your mind from Monday’s  candlelight vigil; tolling through your ear canals like Notre Dame. There are new sounds though, along with the lights. Soothing sounds from the stage start to emerge and you begin to writhe off rhythm, safer with each second. Nothing or no one in particular tells you you’re more safe than any other time in your life, but you see friends with whiskey and beer in their hands and you try to make a conscious decision that it’s a Wednesday at The Social like any other Wednesday at The Social.

Jean-Philip Grobler jogs into the light and ties a rainbow flag around the mic stand. Fear taps your shoulder, tells you to worry a little. It’s not even been a week since horrific events ripped through Orlando and you’re in a similar arena, atmosphere. Okay, take stock of your surroundings, find exits, check your cellphone; is it charged? It is. Okay, you’re fine. Look around. Behind you, a dear friend. On each side of you, new friends. In front of you, St. Lucia; the band you’ve been grinding your teeth to see since 2013. One more scan around the room and the human scenery is multi-colored, swaying together; bodies on strange bodies. If they’re anxious or scared, they don’t emit any odor of it. The reverberating synth of “Rescue Me” begins and you are smiling wildly, only matched by your equally wild limbs flung in every direction. You pause, only for a nanosecond, taking in how silly your fear is before dancing and singing 49 times harder than before.

St. Lucia’s set was an oxymoron; the heaviest lightness in town. They knew Orlando needed healing and stopped to address the crowd on a couple occasions to give us a positive message. Their words were icing on the cake, however, as their music was patching up, even if temporarily, our wounds still so fresh this weekday night.

We come together even when we are scared to look fear in the face and keep dancing in spite of hate,”

Grobler, lead vocals, echoes to the audience. He joins us in the crowd later in the show during “Love Somebody” and embraces the sea of people reaching toward him, lusting for even just the slightest touch. My hands are flailing in his direction and he obliges with a tight squeeze and light eye contact. I’m toast.

St. Lucia’s ability to bring modern life to 80’s esque rhythm’s has given them a strong presence since their inception in 2012 and kept them going into a new era with their latest full length project, Matter. They played equal parts from their previous stunner, When The Night, with “September,” “All Eyes On You,” and “Too Close.” Each song transitioned with ease into the next as the five stood among a tropical, desert paradise. Another oxymoron. They juxtapositioned opposites all night with hard hitting synth-driven dance tracks and slow, hip-grinding ballads.

We cheered their exit and kept cheering for more as smoke rose from the stage, now dimmed. One by one St. Lucia made its triumphant return for their encore, “Elevate.” Our thanks was paid with all our bodies had left to give — a musky mix of love and sweat. Eau de Orlando. The sweaty beautiful.

I’ve listened to St. Lucia every day since the show and my body remembers every wave of sound from that night; every feeling, every face in that room. It shivers with a naive sense of nostalgia and aches as if it was still shuffling offbeat on The Social floor. It’s funny, though, my body doesn’t remember fear. Weird, huh?