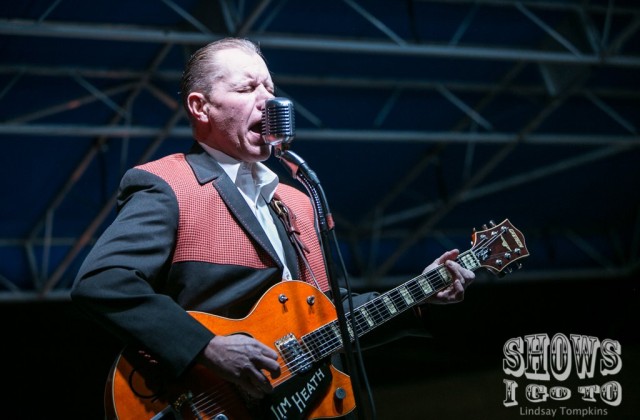 Real cowboys join a conga line at moments of extreme sadness. All you scary guys with big beards, join the conga line. You’ll like it!”

Implores Igor Yuzov, frontman for Igor and the Red Elvises. As the Red Elvises launch into another gypsy surf rock tune, a conga line full of big bearded men obliges, each with a grin goofier than the next. The hilarity of the moment is only trumped by the tightness of the band orchestrating it. 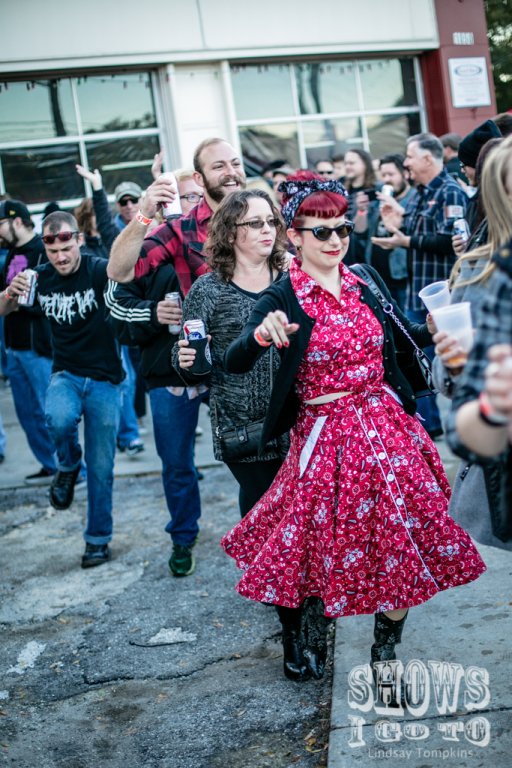 The Red Elvises play songs with names like “Closet Disco Dancer,” accompanied by dance moves choreographed by Igor himself. “Up, up, up,” he dictates we point our fingers during the song. The sold out crowd, large beards, leather jackets, pinup looks, is disco dancing in unison. The scene leaves Igor himself, who does this for a living, tickled.

Drummer Jasmin Guevara is going animal on us. First, she owns her drum kit like she has it comically bent over sexually until it is “time for drum solo.” Igor stumbles off stage. The remaining members of the band drop their weapons and each play a short solo on a corner of the kit, peeling off one by one to leave Guevara alone for a clinic of precision and endurance.

The Reverend Horton Heat’s set is still over an hour away and we have already been largely sated. Everyone seems to know everyone at the sold out celebration, so it takes a minute to wade through hugs on the way to the bathroom or bar. No burden. Booze is adding to the experience, but folks are not here strictly for booze. 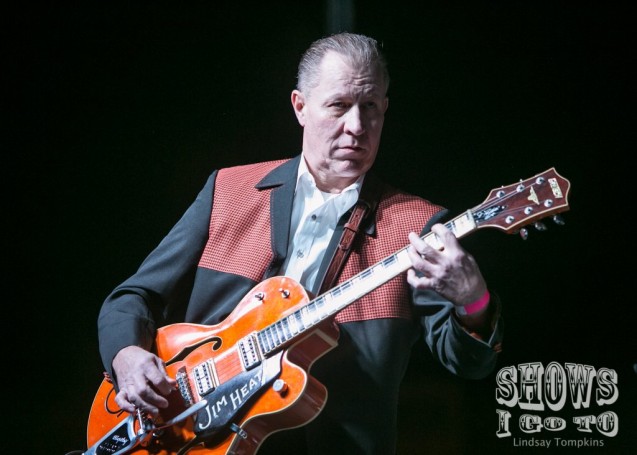 After a perfectly timed break, just enough to love on everyone, hit the head, and order a brew, Blaine Cartwright’s Nashville Pussy takes to the SFS stage like a sonic rubber bullet to the pelvis. Cartwright and guitarist Ruyder Sighs play their brand of southern fried rock guitar like dueling whiskey torches. Cartwright ends the set by pouring Jack Daniels into his hat then halfway down his gullet, half down the front of his shirt. Not to be outdone, Sighs finishes by ripping the strings from her guitar until only the high E remains, still landing lead-foot-heavy.

By now we have forgotten about the delicious beer available. Another perfectly timed break awaits, but we are pining for The Reverend Horton Heat. Girls who wear glasses and jeans well have added to the already pleasant pinup aesthetic.

To see Jim Heath’s band play is to internalize the nature of a cult following. Heath dresses the part of a psychobilly bad ass, then backs up his considerable reputation with absolutely blistering guitar. His playing is incredibly effortless. “Go on, Rev!” bleats the guy standing by the beer tent. “Jimbo!” comes repeated love for Rev’s bass player.

Jimbo knows he is loved. He lays into a solo, then sets the upright bass down on stage as a pedestal for The Reverend. “Go on, Rev!” Jim Heath mounts the recumbent bass and keeps playing as if the moment was an irresistible wave of spontaneity. 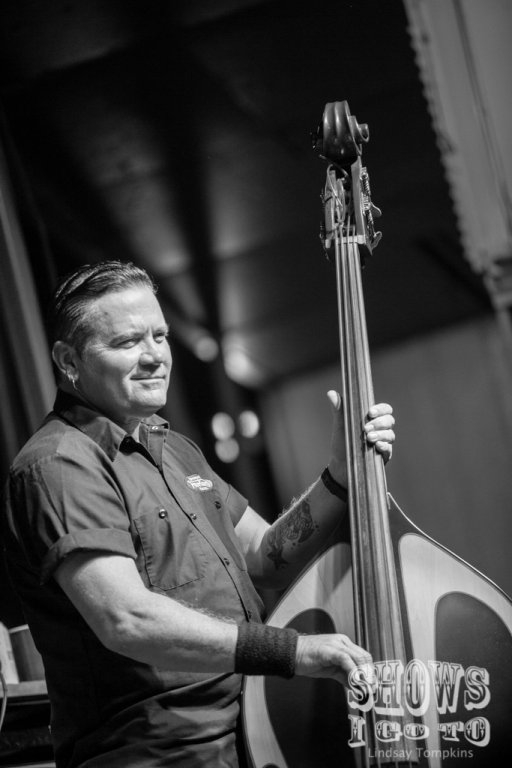 The only thing missing is Unknown Hinson. Wasn’t he supposed to open for The Rev, then stay on stage as Heath and his band finished the job? Jim Heath finishes his most recent guitar slaying before announcing that his next guest terrified him with “monster guitar playing” the first time their paths crossed. Hinson finally makes his debut about an hour into the set. Monster guitar playing ensues for a couple of tunes before Heath reclaims the stage.

The excellent Woolly Bushmen still have a set to play inside. Hats off to folks who were up for more tunes. Igor and the Red Elvises, Nashville Pussy, The Reverend Horton Heat, and Unknown Hinson were all most mortals could handle. A huge fucking smile on the face of every attendee and a current of expert quality running through every facet of the event was enough for the majority. SFS devotees, first-timers, and acquaintances alike left with a toothy grin and full heart. Cheers and happy anniversary, Southern Fried Sunday.