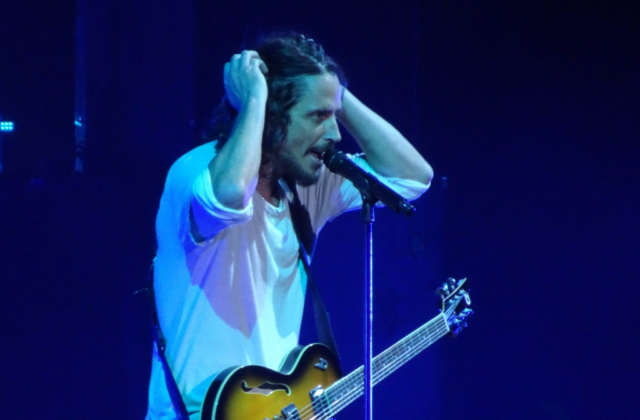 In 2012 my friend Chris from back in high school and I reconnected after twenty or so years. He’s a hard core Chris Cornell fan. Literally the day 98 Rock announce Soundgarden would headline their yearly 98Rockfest show, I receive Chris’s forwarded email reservation so I knew when to pick him up from the airport. I didn’t have a choice.

While the station’s daylong event featured many newer up-and-coming bands, the main attraction and big draw was seeing the forefathers of the grunge movement. Soundgarden carved their own niche in not just the rock genre, but the musical world in general with their own alternate tuning style, which many bands have tried to replicate, but none can duplicate. My friend Chris is such a super fan (did I mention that?). He is constantly adding in bits of trivia or stories of the various Chris Cornell related songs and bands that he performs in. Me being a rock and metal music trivia geek, I soak all that additional fan knowledge up.

We check out Pierce the Veil and A Day to Remember, both of which my only familiarity with their music was limited to what I had heard on the radio. Both bands certainly put on a spirited performance and had a very strong following of younger faces in the crowd, based on the band shirts I saw on those in attendance. Pierce the Veil surprised me a couple of times in their songs with some very heavy head banging grooves.

One of the biggest surprises is a good portion of the crowd leaving after A Day to Remember. Less than a third of the arena for the headliner and one of the biggest and most influential rock bands of the past thirty years. Although, this did lead to some good fortune for Chris and I — we walked closer to the stage to get some photos, and the usher in the section leniently suggested we take two of the seats in one of the empty rows without asking to see our ticket stub! The younger generation came to see all of the ‘bands of today’ should have stuck around to witness and support the band that probably influenced the band(s) they came to see.

Chris tells me he’s concerned how the band would sound as they had not played a live show in almost two years. Then as if almost assuring himself, he says “It’s Soundgarden, you know they are going to tear this place up.”

Their performance was a showcase of excellent musicianship. Guitarist Kim Thayil simply wails on his guitar. The highlight is just how crisp, clear, and killer the band sounded. I am lauding the quality of the sound techs for Soundgarden. I would have to say out of all of the concerts I have seen at this venue, this was the best and clearest sound I have heard. They absolutely sound remarkable. Chris Cornell announces the song “Kyle Petty, Son of Richard.” My friend Chris says, “Holy shit! What is this?! They never play this!” He is soaking in every note and lyric. He also freaks when another rarity is performed, “All Your Lies.” It is only the 33rd time they have ever played it live. It is the little stuff like that just added to the sum of how kick ass the show was.

Since 2012 this is the fourth ‘CC’ show Chris has come down for, two being Soundgarden, two were Chris Cornell acoustic on a solo tour. Each one has been amazing – Chris Cornell is the man with the golden voice. This awesome performance by Soundgarden leaves Chris and I talking about it for days after. It will still be a topic for some time to come. \m/

Spoonman
Kyle Petty, Son of Richard
Outshined
Black Hole Sun
My Wave
The Day I Tried to Live
Been Away Too Long
Ugly Truth
Blow Up the Outside World
All Your Lies
Flower
Jesus Christ Pose
Fell on Black Days
Rusty Cage
Beyond the Wheel