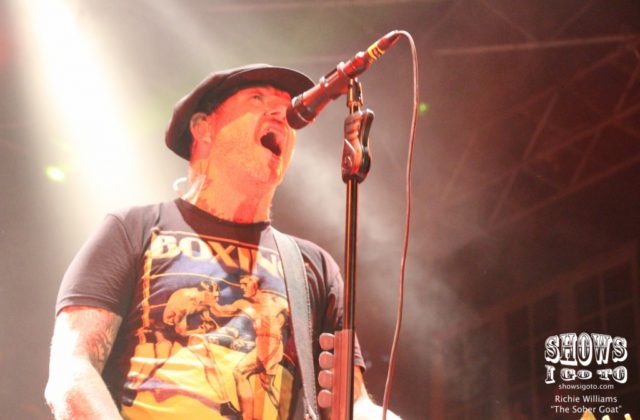 Tonight is my first time seeing Social Distortion. I don’t know how I let it happen … going this long without seeing them live. I amaze myself sometimes. There had been so many prior opportunities for me to see one of their shows, but for whatever reason (no money, show was sold out, I was tired, I forgot, had other plans already, etc.), I had never made the honest effort to see them live. So finally, I find myself on the way to a Social D show!

However, this would be yet again another solo show for the old Sober Goat, for two reasons. Firstly, I was only approved press for one ticket with a photo pass, no +1. Secondly, the show had been sold out for about a month (the Jannus Live show in St. Pete has also been sold out for at least a month) so even if a friend wanted to come with me, they couldn’t. Tonight’s whiskey of choice was good ol’ Jack Daniels.

I should mention exactly one year ago from this night is the day that my father passed away. So cheers to you, Dad. Tonight, I’m celebrating you. I love you, I miss you, and I know you’re with me tonight. I’m not alone.

Opening up the show was Jade Jackson, a beautiful singer/songwriter from the small town of Santa Margarita, California. Her melancholic country-folk caught the attention of Social Distortion front man Mike Ness’s wife and son during an intimate coffee-house performance, and eventually the punk-rock legend contacted her. Mike knew he needed to share her talent with world. Jade was inspired early on by the likes of Johnny Cash, Hank Williams, the Cure, and the Smiths. She began writing songs at age 13 and started playing live shows the following year. Mike eventually produced Jackson’s debut record, Gilded, released May 2017 on Anti- Records.

It was amazing to stand in the photo pit directly in front off Jade and shoot photos, and with no one else in front of me. Sometimes it feels like I’m at a private show and the only audience member in the room. Accompanied by her band (Andrew Rebel, Jake Vukovich and Tyler Miller), she strums that acoustic guitar like a fierce goddess and sings to me like a siren queen. 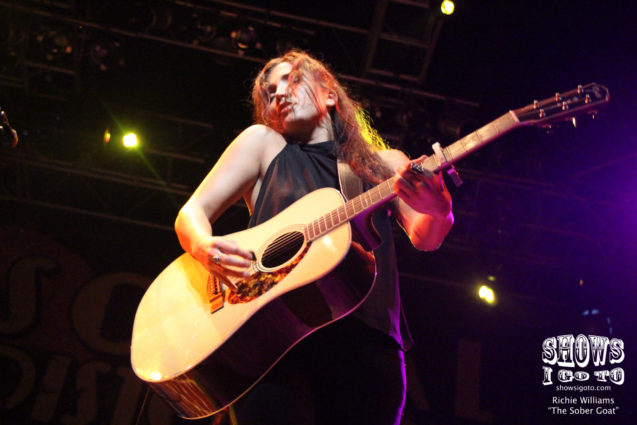 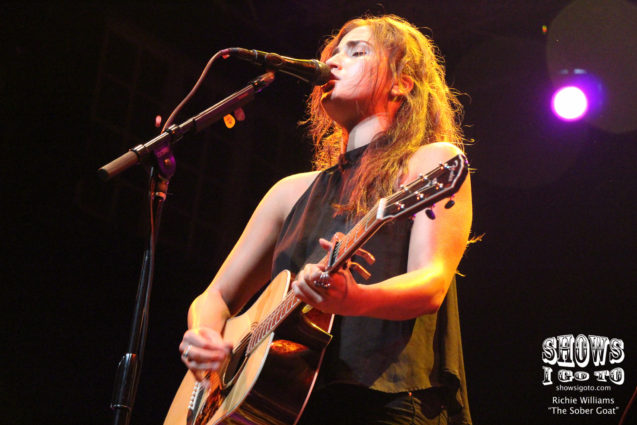 After her set, I’m out on the smoking patio and have conversations with several awesome people. I may be at this show alone but I feel like I’m surrounded by good company — cool tattoos, attractive style, more hair than me (and styled better), and approachable smiles for days. There were two separate conversations that could have gone for hours … and I wouldn’t have minded at all. But Social D about to start drags me away with a smile of my own. I hand my business card into receptive hands and meet back up with Mr. Daniels, surprisingly quick this time. I wait stage right for Social D to start.

The lights dim and curtains part, and they emerge within touching distance — the best punk rock blues band there ever was to be, Social D. A plethora of random signs and props line the length of the stage and on the speakers — a cartoon policeman holding a “SLOW” sign, a “No Parking Police Order” sign, a “Funeral No Parking” sign, a mannequin busts with various hats, and a stomach/hip mannequin bust wearing thong panties and lit up with a blue light. A large “Social Distortion” banner hangs in the back. 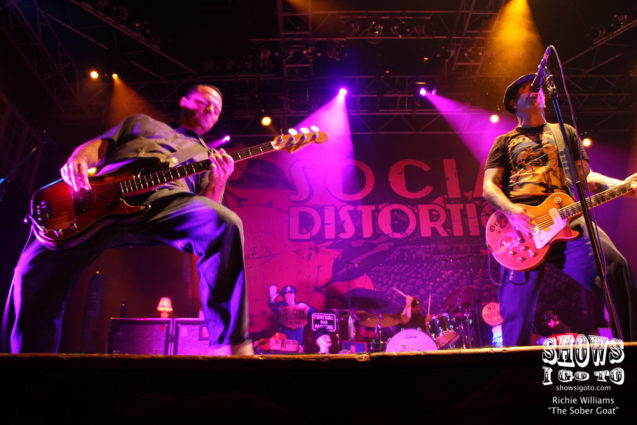 The tip of Mike’s guitar is dawned with a fake pink rose. Now that’s some bad ass rock and roll right there. 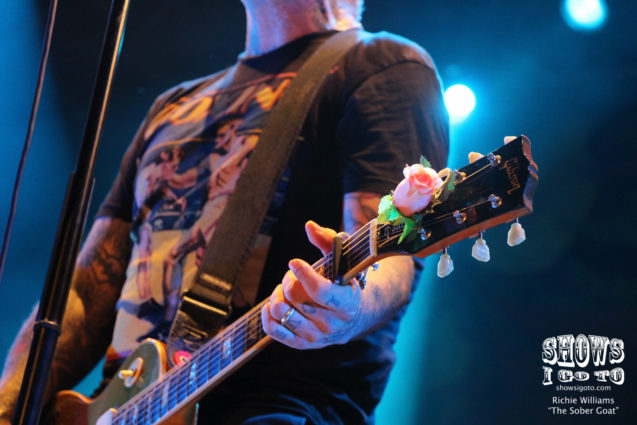 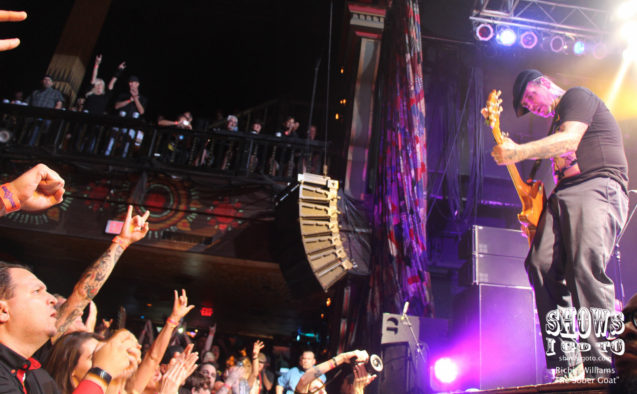 Mike talked with the crowd on and off throughout the night, at one point addressing our dumbass president. Watch the rant below, thanks to YouTube user alisarue.

For nearly two hours, Social Distortion tugs at our heart strings with their sweet sounds. I bounce around from one corner of the room to another taking photos and short video clips, and singing all the while. Mr. Daniels and I have our fourth rendezvous. 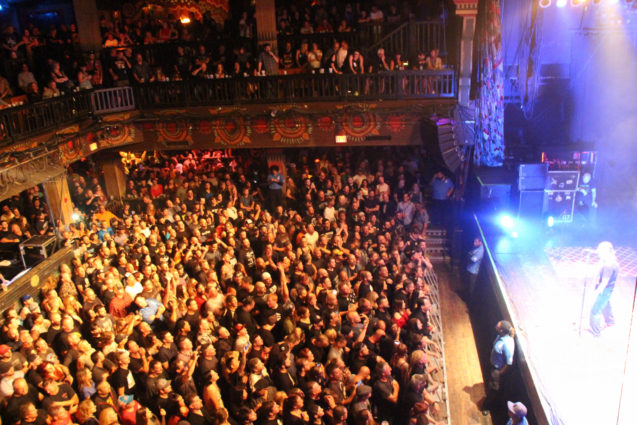 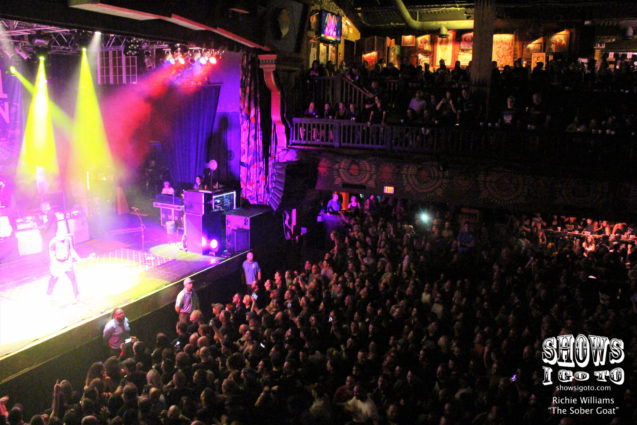 Mike’s lyrics remind me of recent life events and my heart aches with a myriad of emotions, yet at the same time I’m smiling with motivation and determination, trying to keep my head up.

I have no one there with me, so I’m just this loner roaming around the venue, reminiscing and reflecting like a fool, thinking about a lost love and about my lost dad. The majority of their songs explode with subjects of heartbreak or troubled times to overcome or other things in and near those realms. The bluesy chords and beats drive it all home. It seems like every song tonight is my song, from “Story of My Life” to “Machine Gun Blues,” from “When She Begins” to “Ball and Chain,” I have a place in life for them all. I feel my socialness is about to begin a very distorted journey for the next few months and into 2018.

I listen to the encore from the doors so I can be the first one out and head to my car as soon as the show is over. The last song of the night is Johnny Cash’s “Ring of Fire” and it screams at my heart so matter of fact that I turn around full with satisfaction and leave before it’s finished. The soundtrack to the end of my night fades from the building as I walk away but only gets louder inside my head.