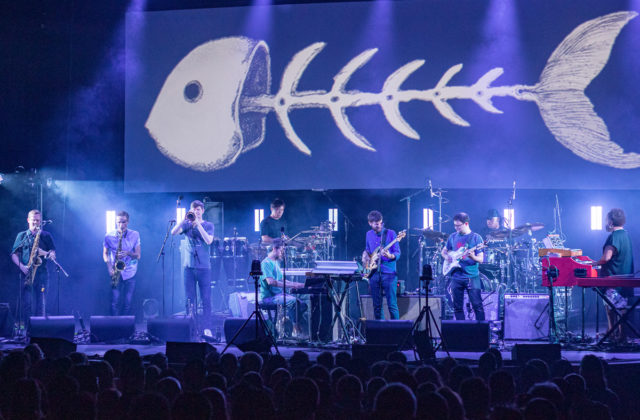 Music is subjective.  Everyone likes their own style and genres, it’s what makes music great!  No band is really better than any others …  Until you get to Snarky Puppy.  25 members strong, this massive collection of talented musicians brings joy to the hearts of anyone who listens.  These people work hard to bring their music to the masses and tour all year round.  September in Florida and tonight we are the lucky fans to have our hearts filled!

I arrive to The Plaza Live and meet up with my good friend, Jacob Hayes, who is taking photos of tonight’s performance.  He and I have been friends for it seems like 20 years and haven’t yet had the pleasure of working together.  So, tonight will be a treat!  The box office was very accommodating and we made our way right into the lobby.  The venue has a sizable open viewing area with a medium sized balcony up top.  They have large bathrooms and enough points of sale for drinks so the line moves quickly.  The only drawback to this venue is that you have to leave the music to get another beverage.

Walking in the door we can hear the beginning of some rad jazz going down in the next room so we hurry to occupy the same room as House of Waters from Brooklyn, NY.  Scoring an Emmy Award winning ESPN documentary, this fusion band’s mission is to bring numerous styles and influences into one solid structure.   Offering several whimsical movements, they include  “The Wall,” off of their February, 2019 release Rising.   This trio is led by Max ZT on the hammered dulcimer.  It’s a percussion-stringed instrument which consists of strings stretched over a trapezoidal resonant sound board.  Essentially he’s achieving a guitar type sound but by hitting the strings with a small spoon-shaped hammer in each hand.  And holy shit is he good.  I mean simply stunning!  He might as well be a robot, he moves with such purpose and focus!  I might be stunned, but the other guys have no trouble staying together as they paint lush soundscapes right before our eyes.

The song changes and now bassist Moto Fukushima captains the ship and we travel across the ocean on a lengthy odyssey.  Now it’s the drummers turn!  Ignacio Rivas Bixio incorporates his South American heritage to this mixing bowl.  He flexes with several contrasting styles, even changing the sounds of his drums by straining the surface.  He works his way around the kit brewing up a storm.  Faster and faster he strikes and rumbles creating a dark cloud before relaxing his vibe and fading away.   Max ZT breaks through with his sunny and magical dulcimer instrument.  Holy cow!  This is both beautiful and complicated!  Adult contemporary music at its finest.  Classy but with an edge.  I can’t wait to see these guys again!  Don’t miss this trio!

We spend set-break people watching.  Not too much to report, but I don’t think you’re supposed to tuck your t-shirt in your jeans.  Maybe that’s just me… Snarky Puppy is a beast.  This talented conglomerate is more than just jazz.  They are at the top of the jazz/fusion scene by stretching outside the limits of conventional genres.  They take the stage as fans rush back to their seats.  Huge bright lights are spread evenly behind the band as well as a giant screen above them for close ups from the cameras.  The song catalog and the roster for this Grammy Award winning (Best R&B Performance in 2014, Best Contemporary Instrumental Album in 2016 and 2017) group is vast.  The first song is “Semente” features Asheville’s Chris Bullock on flute to start while the rest of the band works hard to create a vibrant and immersive feeling around us.  “Chrysalis” is the following selection with an emphatic showing from the Jacksonville native drummer and vocalist, Jamison Ross.  His 2015 debut solo release, Jamison, introduced the world to his music and earned him a Grammy nomination for Best Jazz Vocal Album.  Next up is my favorite song of the night, “Chonks.”  This chunky, funky delight is so good it might as well be coffee and cannabis.

Let’s just say its probably good I haven’t taken my seat yet.  I am a dancing fool during this one especially and I need my space!  Snarky Puppy performs more selections from their March 2019 release, Immigrance, including “Bigly Strickness,” “Bad Kids to the Back,” and “Even Us.”  Somewhere along the way percussionist Keita Ogawa works with Ross to create a flowing and morphing collage of beats.  Ogawa even plays some crazy thing that sounds like an old floppy saw being waved and wobbled.  The crowd reacts with surprise and excitement. The show ends with but not without a twist!  A visitor in the encore and who is it, but Roosevelt Collier to tear things down on the last song!  They play the upbeat “What About Me?”  The whole stage is roaring with gorgeous sound to finish up a this excellent night with Snarky Puppy and House of Waters! We make a break from The Plaza Live and head over to the Iron Cow for a local afrobeat band called Bengali 600.  Their sound reminds me of Budos Band or Antibalas.  Horn players Christian Ryan (Holey Miss Moley, Leisure Chief) and Jeff Richie (Control This) are right up front to quarterback this funky after party.  And wouldn’t you know it they play “Up From the South” by Budos Band next.  We call it a night at set break and head home.  What a killer night of music!