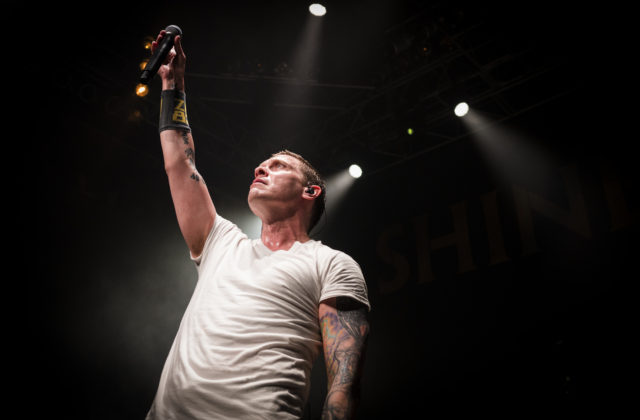 2018 was the year of Shinedown. The Florida released their positively received sixth studio album Attention Attention, held an awesome co-headline tour with Godsmack, and rocked both America and Europe as they headlined numerous rock festivals (including Orlando’s 25th Earthday Birthday Festival). As hard as these rockers went, you might expect them to want to relax as the new year draws closer. But rather than take it easy, they decided to close the year with two nights at Orlando’s House of Blues, while promising attendees that they’d receive an intimate night with the band. Tickets sold so fast that you would quickly miss your chance if you weren’t quick. Fortunately, the band decided to add an additional date, December 27th, to give hardcore fans a second chance to attend the show. Little did they know they were in for the time of their lives.

It’s 9 P.M; the stage is empty aside from a drum set hidden under a tarp blanket, the heat of hundreds of bodies packed. The venue’s loud speakers blared Panic! At the Disco’s “Don’t Threaten Me With A Good Time” and Jay-Z’s “99 Problems” as fans grew restless for the show to begin. They begin loudly chanting “Shinedown! Shinedown! Shinedown!” hoping that the band hears their calls to come out. The echoes of a snare drum starts to fill the room. Drummer Barry Kerch makes his way on stage as the drums grow louder, followed by bassist Eric Bass and guitarist Zach Myers. Once he’s behind his drum set, Kerch removes the tarp concealing his kit. But rather than see the exclamation point symbol from their new album painted on his drums, a different, yet familiar image is painted on his drum shells – four crows painted inversely in black and black. None of us could believe our eyes or ears – FOR THE FIRST TIME EVER, SHINEDOWN WAS ABOUT TO PERFORM SOUND OF MADNESS IN FULL. 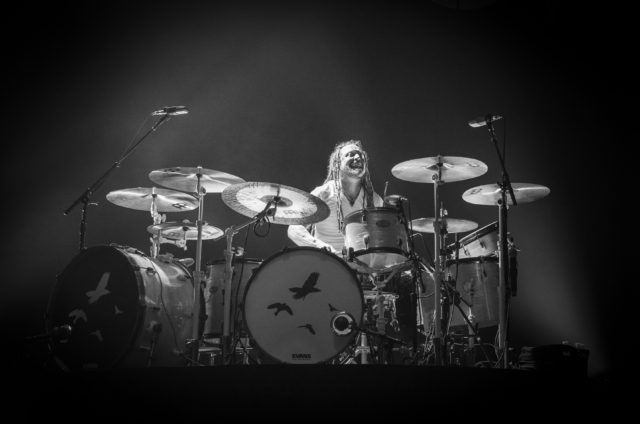 The Sound of Madness begins…

You didn’t have time to comprehend what was happening as frontman Brent Smith swiftly moves across the stage, letting loose his inner beast as he belted out the words to “Devour.” There were no pyrotechnics; no smoke and tricks added to the performance. There were only four talented musicians on stage rocking out without a care in the world. And you know what? That was all they needed in order to put on an unforgettable show. Myers switching back and forth between playing an acoustic guitar and an electric one during “Second Chance” to Bass . Kirch on the other hand showcased his skills as a talented drummer throughout the night, especially during “Sin with a Grin.” Meanwhile, Smith would switch from his raw-powerful, yet energetic vocals during “Sound of Madness” to a soft yet assertive tone as he sang “Breaking Inside.”

As the band finished performing “Call Me,” they left the stage. Moments later, sirens began to blare over the speakers. “ATTENTION. ATTENTION.” indicating that the sound of madness has ended. Bright heavenly lights began flashing as the band came back on stage. The lights then cut off; a small child could be heard saying “Don’t be afraid.” Red lights poured from the ceiling. We were now in hell, yet no one had any objections as the band began performing their hit single, “DEVIL.” Everyone lost themselves in the music’s catchy riffs and drum beats. The crowd practically erupted the moment Brent yelled to them “CAUSE IT’S ABOUT TO GET HEAVY!” As the night came to a close, the band wrapped up their set with their recent single, “Get Up,” their infamous “Simple Man” and the enlightening “brilliant.”

Sound of Madness is without a doubt one of Shinedown’s most famous albums of all time; it was the album that introduced people to the band and quickly captivated listeners. 2018 marked the ten year anniversary of the album’s release, so not only was it special moment to hear the album in full, but a momentous occasion for their fans.  You would think that after a night as incredible as this one, that there’s no way that Shinedown could hope to match their performances the following nights.

The second night of Shinedown was just as packed as the first night. But for most of that night, the band ditched the electric guitars and went acoustic, opening their set with an acoustic rendition of “Fly From the Inside.” In spite of the fact that they were sitting and playing acoustic instruments, Shinedown had just as much energy in their performance as they did during any other set they had done before.

Further showing that the performance was about having fun, Eric Bass admit to the crowd before they began “Through the Ghost” that they had actually planned to play another song – unfortunately he forgot how to play it. “And that’s the sign of a true musicians – admitting to your mistakes!” Smith joked. Never less, their take on the song was beautiful to listen to live. 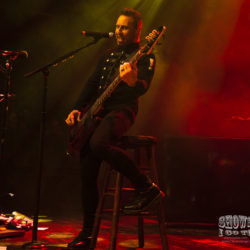 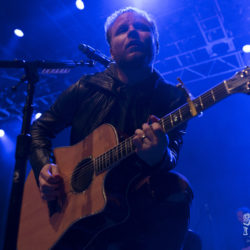 In fact, hearing the calmer takes on a lot of these songs was a nice change of pace . The band truly kept their promise to give a personal show as they took moments between songs to goof off and make jokes towards each other. In those moments they weren’t the famous rock band “Shinedown” but citizens of Florida that you could relate to and possibly grab a beer with sometime. That night, Smith left a lasting impression on the audience – while performing, he paid attention to the crowd’s enjoyment and abruptly stopped their performance of “How Did You Love.” Handing the mic to one of the venue’s security guards, he headed into the pit to resolve a conflict – a guest was ruining other people’s time by, as he put it, “trying to mosh to a love song.” Once the situation was resolved, the band started from the beginning, the audience seemingly forgotten the conflict that occurred just moments before. 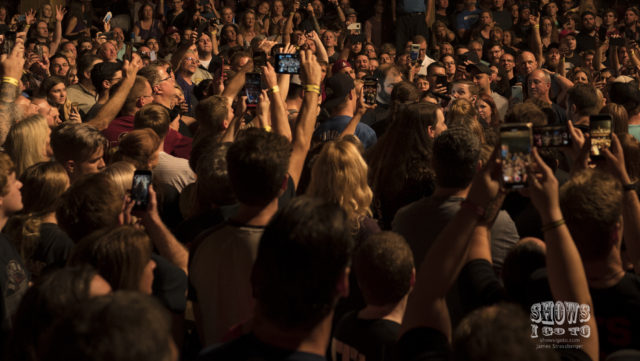 The band did bring back their electric guitars for the final five songs of the night, ripping right into “DEVIL” before transitioning to “Diamond Eyes,” “Enemies,” and closing the night with “Sound of Madness.” Compared to the first night of the show, the second night had far more variety in terms of the band’s setlist, but the variety from the second night was the perfect preparation for the band’s final night at the House of Blues.

A few hours before their third and final performance of the year, the band did something out of the ordinary. They posted a video on their social media account, accompanied by the caption: “Orlando…Setlist is all on you tonight…make signs or bring signs to the show!!!” Arriving at the House of Blues graced viewers to the sight of fans lined up hours before the show, but this time with whatever they could find to make their signs – signs written with crayons & sharpies on sheets of paper and cardboard pizzas were scattered throughout the line to the show. “ 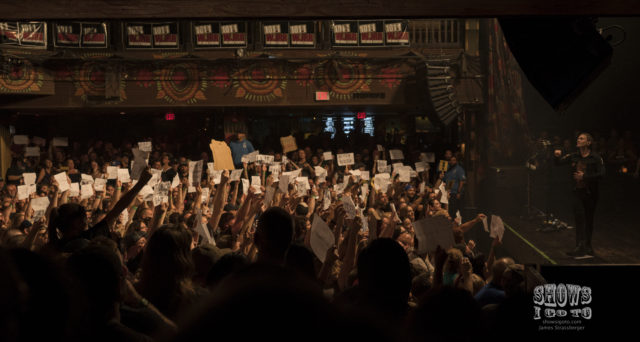 Brent addressed the crowd “Give us a minute between songs. We’ve never done anything like this before and our sound guys have no idea what we’re doing!” After each song, each band member would take a moment to pick a song from the crowd, all the while humbly thanking them and reminding them that they were the reason that they were on that stage. The crowd was blown away by the variety of songs performed throughout the night, as it gave them a chance to hear songs that they either hadn’t heard before or hadn’t heard in years. Fans were delighted to hear songs “Monster,” as it was the first time the song was performed live in North America, as well as Us and Them‘s “I Dare You” and “Heroes,” as well as  “Her Name is Alice,” the latter of which was featured on the Almost Alice 2010 compilation album. I personally was excited when Bass decided that the band should play “Save Me” and found myself singing and jumping along to the music the instant the song began. 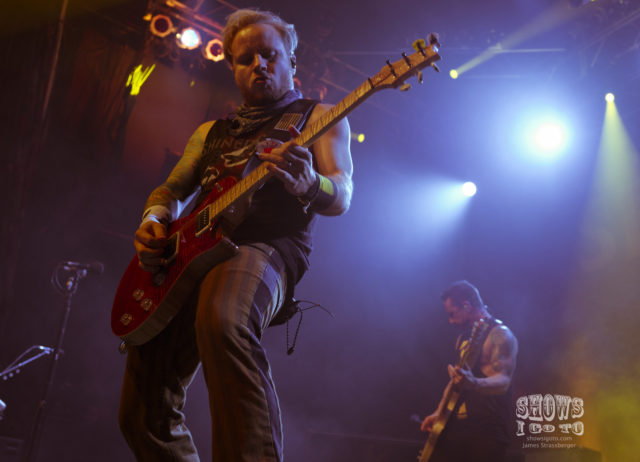 Overall, ticket each night felt like a chance to spin a prize wheel – you bought your ticket, unsure of what to expect at the show, but you just knew that whatever the prize was, it would guarantee the time of your life. If you were lucky enough to get tickets to more than one night, then you won not only the jackpot, but an experience that will make any future Shinedown show nearly impossible to match. There were a few nights were a few songs were performed all three nights, such as “Second Chance,” “Call Me,” and “Get Up,” which could possibly. But personally, I loved hearing “DEVIL” played every single night and made sure to put all my energy into singing along as they performed it.  So Shinedown: thank you for the past ten years of madness; hopefully the next ten years will be just as amazing. 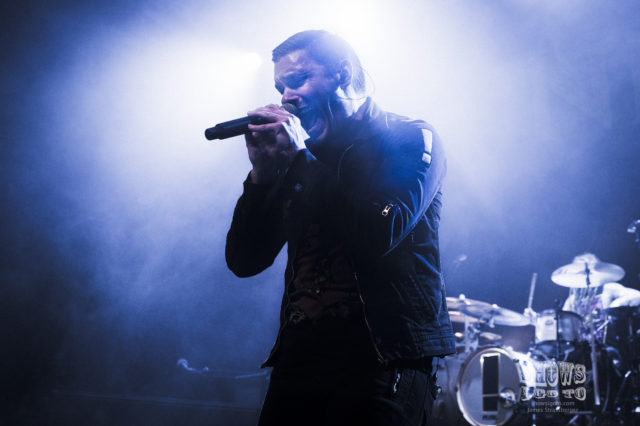 You can catch Shinedown in 2019 at these upcoming tour dates.