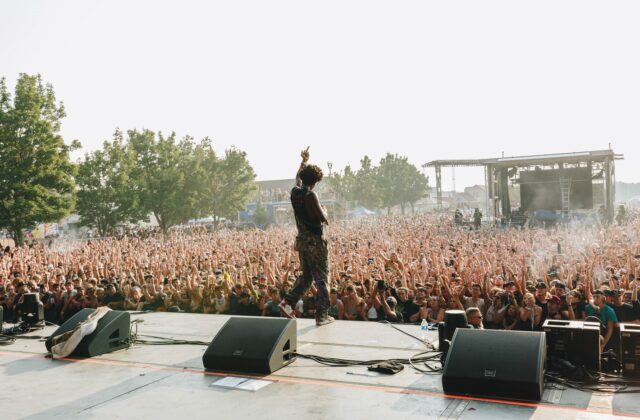 Carlos St. John Phillips, is best known as the singer, songwriter, rapper and producer, Saint Jhn. He is officially on tour and will be having a show at Jannus Live in St. Pete, Wednesday the 8th of December (TICKETS HERE). With the release of “While the World Was Burning” in 2020, Saint Jhn has finally hit the road with Tyla Yaweh and Angel + Dren. His first album “Ghetto Lenny’s Love Songs”, which was released in 2019, was a smash hit featuring artists A Boogie Wit da Hoodie, Lenny Kravitz, Lil Baby, and Meek Mill. But his second album, “While the World Was Burning”, has grown off the vocals and sounds of his first album to deliver a sound that feels like he has finally mastered his own sound, taking inspiration from Travis Scott and Future, to create something that is familiar while at the same time so original. The acts that are accompanying Saint Jhn, Tyla Yaweh and Angel + Dren, are both acts that sound nothing like Saint Jhn but fit the vibe of him so well. Tyla Yaweh, who is signed to Post Malone’s record label London Entertainment, is a rapper from Orlando, FL with a distinct laid back hip hop vibe over fresh beats that is a blessing to your ears. Angel + Dren is a dj duo that feels like a vibrant new taste on a smooth sound and dreamy vocals that make you want to close your eyes and float away. The show is sure to be a good one and is not one that will want to be missed. The three have had singles come out in the past couple months and will most likely be playing old songs as well as new ones. This show is a must see for anyone in Central Florida, and if you’re out of state make sure to catch them on any leg on the rest of their nationwide tour.

Here’s your chance to win some free tickets to SAINt JHN at Jannus Live in St. Pete on December 08, 2021!

Bonus points if you share this article on your insta/facebook/twitter/etc. Contest ends Monday, Dec 6, 2021 at 8pm EST.

Saint Jhn Tampa Tickets at Jannus Live 2021 Preview Juergen Boehmer. Special shout out to No Clubs for bringing live music back one show at a time. <3