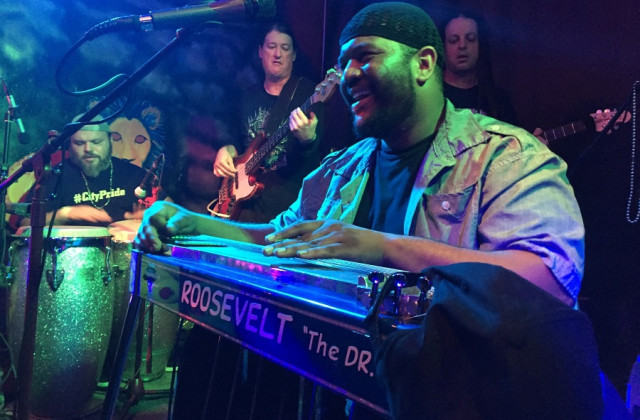 No big deal, Victor Wooten made a surprise guest appearance and sat in for a song with Roosevelt Collier Trio and friends at a small local pub, no big deal. He was at the Orlando Sam Ash earlier in the day, schooling people and making it look so simple (according to a friend who attended).

Roosevelt Collier, aka Rosie, aka The Doctor, is the pedal steel guitar frontman for the Lee Boys and perpetual “Artist at Large.” He’s also the master of the sit-in. Rosie made the drive from South Florida up to Orlando on Friday to play a quaint little show with his side project, Roosevelt Collier Trio, at Red Lion Pub in the Winter Park area of east Orlando. Roosevelt Collier Trio features Roosevelt front and center, alongside Mofro drummer Anthony Cole and Shak Nasti bassist Matt Lapham, creating a raging rhythm section with a grimy groove.

Local guys, Brown Note, opened up the show. The band also features Mofro drummer Anthony Cole and Shak Nasti bassist Matt Lapham, as well as Roland Simmons on guitar and Jorge Ito Colon Jr on percussion. The local legends played a solid 45-minute set to get things started in the Lion’s Den, which is the side music room at Red Lion Pub. This cozy room features a 40 foot mural collaboration done by nearly a dozen artists and is highlighted by the amazing psychedelic lights scattered throughout. It is somewhat tiny room for a large crowd, so it’s easy to make friends and get your neighbor moving on your level when the music is jamming. It can also get a bit steamy in there at times when packed, and with the way these guys were playing it’s nearly impossible to stand still. Anthony Cole put it best:

It’s gonna be real easy to percolate in this room.”

After a much needed break (I nearly went into funk shock!), the time had come for the trio.  The first few songs featured the core three for about the first half hour, until Roosevelt called Brown Note’s guitarist Rolland Simmons up to the stage for a song.  The next song featured another change-up: Bobby Koeble of Junkie Rush replacing Roland on guitar for the rest of the set. Halfway through this song, Rosie gave a head nod to saxophone virtuoso Christian Ryan, directing him up to the stage, where he would remain for the rest of the set. Minutes later, Rosie beckoned Ito to step up as well, prompting a drum and bongo jam.

One of my favorite moments came when the band started playing a super funky cover of Michael Jackson’s “The Way You Make Feel” with Rosie impersonating the vocals on his steel axe and slipping in “We Want The Funk” riffs. But, this moment was followed by the zenith of the night: a special guest appearance by none other than Victor Wooten, bass magician and a founding member of Béla Fleck and the Flecktones.

Victor has won every major award given to a bass guitarist. He was named “Bassist of the Year” in Bass Player Magazine‘s readers poll three times (the only person to win it more than once). And in 2011, Rolling Stone voted Victor one of the Top Ten Bassist OF ALL TIME!! Oh! And he is also a five-time Grammy winner. [Editors Note: This dude is no joke!]  It was so amazing to be feet away from all of the talent on stage. After Victor finished that ten-minute jam, one last heater came from those remaining on stage to close out was truly a night to remember.

Red Lion Pub is owned by Christian Ryan’s family, so it’s kind of amazing not just for him but also for his friends in attendance. As Christian posted online the next day:

I would say I hope you enjoyed it as much as I did, but I’m not sure that’s possible!”

Watch full set videos of both Brown Note and Roosevelt Collier Trio below, via The Sober Goat.