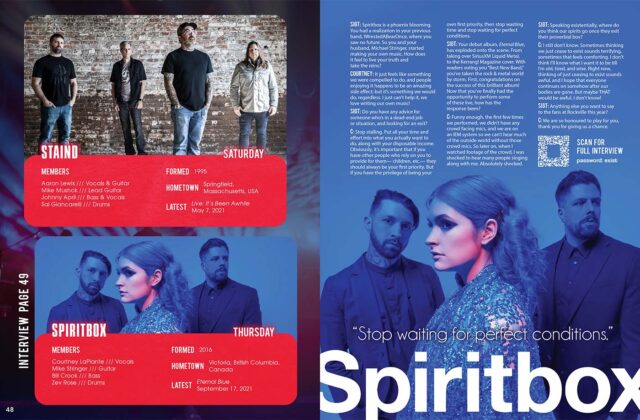 SIGT: Spiritbox is a phoenix blooming. You had a realization in your previous band—IWrestedABearOnce— where you saw no future. So you and your husband, Michael Stringer, started making your own music. How does it feel to live your truth and take the reins?
Courtney: It just feels like something we were compelled to do, and people enjoying it happens to be an amazing side effect; but it’s something we would do, regardless. I just can’t help it, we love writing our own music!

SIGT: Do you have any advice for someone who’s in a dead-end type job or situation and looking for an exit?
Courtney: Stop stalling. Put all your time and effort into what you actually want to do, along with your disposable income. Obviously, it’s important that if you have other people who rely on you to provide for them— children, etc.— they should always be your first priority. But if you have the privilege of being your own first priority, then stop wasting time and stop waiting for perfect conditions.

SIGT: Your debut album, Eternal Blue, has exploded onto the scene. From taking over SiriusXM Liquid Metal, to the Kerrang! Magazine cover. With readers voting you “Best New Band,” you’ve taken the rock & metal world by storm. First, congratulations on the success of this brilliant album! Now that you’ve finally had the opportunity to perform some of these live, how has the response been?
Courtney: Funny enough, the first few times we performed, we didn’t have any crowd facing mics, and we are on an IEM system so we can’t hear much of the outside world without those crowd mics. So later on, when I watched footage of the crowd, I was shocked to hear many people singing along with me. Absolutely shocked.

SIGT: You’ve noted some of your influences are Alexisonfire and TesseracT. Who inspires you when performing screaming/unclean vocals?
Courtney: I have thought about this a lot and I don’t think I have just a few vocalists who inspire me; it’s really every single one I’ve listened to, even ones I don’t like very much. Anyone who sounds unique or brings a unique perspective to the table has always left a lasting impression on me, even if it influences just one phrase or even one syllable.

SIGT: Speaking existentially, where do you think our spirits go once they exit their proverbial box?
Courtney: I still don’t know. Sometimes thinking we just cease to exist sounds terrifying, sometimes that feels comforting. I don’t think I’ll know what I want it to be till I’m old, tired, and wise. Right now, thinking of just ceasing to exist sounds awful, and I hope that everyone continues on somehow after our bodies are gone. But maybe THAT would be awful. I don’t know!

SIGT: Are there any artists on the lineup you’re looking forward to seeing?
Courtney: I want to watch Slipknot, Gojira, and Metallica! This festival is so stacked, there are probably other acts I forgot are playing that will blow my mind when we see them.

SIGT: Anything else you want to say to the fans at Rockville this year?
Courtney: We are so honoured to play for you, thank you for giving us a chance.

SIGT: One more— you wrote most of Eternal Blue in Joshua Tree, CA. Did you see any potential extraterrestrial spacecraft zipping around out there? And, do you believe?
Courtney: I don’t know what I believe, I am a skeptic of people that claim they have seen a bunch of wild stuff, but I also think it’s completely valid and rational to think there is intelligent life trying to make some sort of contact with our world. I didn’t see anything freaky in Joshua Tree though!