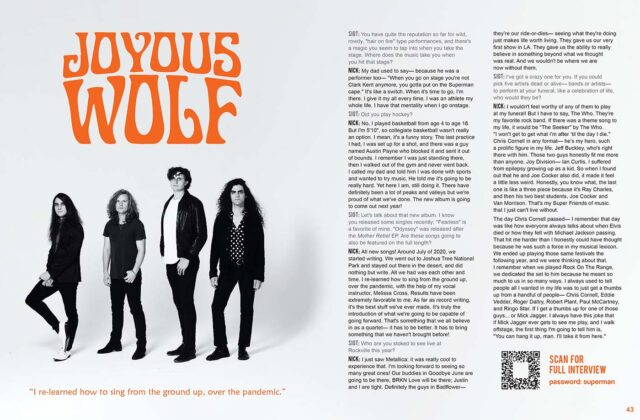 SIGT: You have quite the reputation so far for wild, rowdy, “hair on fire” type performances, and there’s a magic you seem to tap into when you take the stage. Where does the music take you when you hit that stage?

NICK: My dad used to say—because he was a performer too—”When you go on stage you’re not Clark Kent anymore, you gotta put on the Superman cape.” It’s like a switch. When it’s time to go, I’m there. I give it my all every time. I was an athlete my whole life. I have that mentality when I go onstage.

SIGT: Did you play hockey?

NICK: No, I played basketball from age 4 to age 18. But I’m 5′ 10,” so collegiate basketball wasn’t really an option. I mean, it’s a funny story. The last practice I had, I was set up for a shot, and there was a guy named Austin Payne who blocked my shot and sent it out of bounds. I remember I was just standing there, then I walked out of the gym and never went back. I called my dad and told him I was done with sports and wanted to try music. He told me it’s going to be really hard. Yet here I am, still doing it. There have definitely been a lot of peaks and valleys but we’re proud of what we’ve done. The new album is going to come out next year.

SIGT: Let’s talk about that new album. I know you released some singles here recently. “Fearless” is a favorite of mine. “Odyssey” was released after the Mother Rebel EP. Are these songs going to also be featured on the full length?

NICK: All new songs! Around July of 2020, we started writing. We went out to Joshua Tree National Park and stayed out there in the desert, and did nothing but write. All we had was each other and time. I re-learned how to sing from the ground up over the pandemic, with the help of my vocal instructor, Melissa Cross. Results have been extremely favorable to me. As far as record writing, it’s the best stuff we’ve ever made. It’s truly the introduction of what we’re going to be capable of going forward. That’s something that we all believe in as a quartet—it has to be better. It has to bring something that we haven’t brought before.

“I re-learned how to sing from the ground up, over the pandemic”

SIGT: Who are you stoked to see live at Rockville this year?

NICK: I just saw Metallica, so they’re not on my list anymore. It was really cool to experience that. I’m looking forward to seeing so many great ones! Our buddies in Goodbye June are going to be there; BRKN Love will be there—Justin and I are tight. Definitely the guys in Badflower—they are our ride-or-dies—seeing what they’re doing just makes life worth living. They gave us our very first show in LA. They gave us the ability to really believe in something beyond what we thought was real and we wouldn’t be where we are now without them.

SIGT: I’ve got a crazy one for you. If you could pick five artists dead or alive—bands or artists—to perform at your funeral, like a celebration of life, who would they be?

NICK: I wouldn’t feel worthy of any of them to play at my funeral. But I have to say, The Who. They’re my favorite rock band. If there was a theme song to my life, it would be “The Seeker” by The Who. “I won’t get to get what I’m after till the day I die.” Chris Cornell in any format—he’s my hero, such a prolific figure in my life. Jeff Buckley, who’s right there with him. Those two guys honestly fit me more than anyone. Joy Division—Ian Curtis. I suffered from epilepsy growing up as a kid, so when I found out that he and Joe Cocker also did, it made it feel a little less weird. Honestly, you know what, the last one is like a three piece because it’s Ray Charles, and then his two best students, Joe Cocker and Van Morrison. That’s my Super Friends of music that I just can’t live without.

“Chris Cornell in any format—he’s my hero.”

The day Chris Cornell passed—I remember that day was like how everyone always talks about when Elvis died or how they felt with Michael Jackson passing. That hit me harder than I honestly could have thought because he was such a force in my musical lexicon. We ended up playing those same festivals the following year, and we were thinking about that sometimes. I remember when we played Rock On The Range, we dedicated the set to him because he meant so much to us in so many ways. I always used to tell people all I wanted in my life was to just get a thumbs up from a handful of people—Chris Cornell, Eddie Vedder, Roger Daltry, Robert Plant, Paul McCartney, and Ringo Star. If I get a thumbs up for one of those guys … or Mick Jagger. I always have this joke that if Mick Jagger ever gets to see me play, and I walk offstage, the first thing I’m going to tell him is, “You can hang it up, man. I’ll take it from here.”