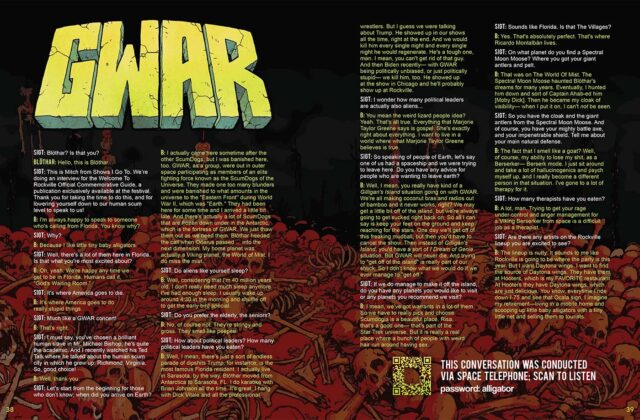 00:00:14.600
THIS CONVERSATION WAS CONDUCTED VIA SPACE TELEPHONE

SIGT: Blöthar? Is that you?

SIGT: This is Mitch from Shows I Go To. We are doing an interview here for the Welcome To Rockville Official Commemorative Guide. It’s a 66-page publication we’re printing exclusively available at the festival. Thank you for taking the time to do this and lowering yourself down to our human scum level to speak to us!

Blöthar: I’m always happy to speak to someone who’s calling from Ocala, Florida. You know why?

SIGT: Well, there’s a lot of them here in Florida. Is that what you’re most excited about?

Blóthar: Oh, yeah. We’re happy any time we get to be in Florida. Humans call it “God’s Waiting Room.”

Blöthar: It’s where America goes to do really stupid things.

SIGT: I must say, you’ve chosen a brilliant human slave in Mr. Michael Bishop, he’s quite the academic. And I recently watched his Ted Talk where he talked about the human scum city in which he grew up. Richmond, Virginia. So, good choice!

SIGT: Let’s start from the beginning for those people who do not know, when did you arrive on Earth?

Blöthar: I actually came here sometime after the other Scum Dogs, but I was banished here, too. GWAR, as a group, were out in outer space participating as members of an elite fighting force known as the ScumDogs of the Universe. They made one too many blunders and were banished to—what amounts in the universe to the “Eastern Front” during World War II, which was—”Earth.” They had been here for some time and I arrived a little bit late. And there’s actually a lot of ScumDogs that are frozen down under in the Antarctic, which is the fortress of GWAR. We just thaw them out as we need them. Blothar heeded the call when Oderus passed … into the next dimension. My home planet was actually a Viking planet, the World of Mist. I do miss the mist.

“there’s actually a lot of ScumDogs that are frozen down under in the Antarctic, we just thaw them out as we need them.” Blöthar: Well, considering that I’m 40 million years old, I don’t really need much sleep anymore. I’ve had enough sleep. I usually wake up around 4:30 in the morning and shuffle off to get the early bird special.

SIGT: Do you prefer the elderly, the seniors?

Blöthar: No, of course not. They’re stringy and gross. They just smell like PP.

Blöthar: Well, I mean, there’s just a sort of endless parade of dipshits having to help shuffle off this Mortal Coil. Trump, for instance, speaking of Florida, is the most famous Florida resident. I actually live in Sarasota, by the way. Blothar moved from Antarctica to Sarasota, FL. I do karaoke with Brian Johnson all the time. It’s great. I hang with Dick Vitale and all the professional wrestlers. But I guess we were talking about Trump. He showed up in our shows all the time, right at the end. And we would kill him every single night and every single night he would regenerate. He’s a tough one, man. I mean, you can’t get rid of that guy. And then Biden recently—with GWAR being politically unbiased, or just politically stupid—we kill him, too. He showed up at the show in Chicago and he’ll probably show up at Rockville.

SIGT: I wonder how many political leaders are actually also aliens.

SIGT: So speaking of people of Earth, let’s say one of us had a spaceship and we were trying to leave her. Do you have any advice for people who are wanting to leave earth?

Blöthar: Well, I mean, you really have kind of a Gilligan’s Island situation going on with GWAR. We’re all making coconut bras and radios out of bamboo and it never works, right? We may get a little bit off of the island, but we’re always going to get sucked right back on. So all I can say is keep your feet on the ground and keep reaching for the stars. One day we’ll get off of this freaking mudball, but then you’d have to cancel the show. Then instead of Gilligan’s Island, you’d have a sort of I Dream of Jeannie situation. But GWAR will never die. And trying to “get off of the island” is really part of our shtick. So I don’t know what we would do if we ever manage to “get off.”

Blöthar: I mean, we’ve got warrants in a lot of them. So we have to really pick and choose. Scumdogia is a beautiful place. Risa, that’s a good one—that’s part of the Star Trek universe. But it is really a real place where a bunch of people with weird hair run around, just have sex.

SIGT: What planet do you find a Spectral Moon Moose? Where you got your giant antlers and pelt.

Blöthar: That was on The World Of Mist. The Spectral Moon Moose haunted Blothar’s dreams for many years. Eventually I hunted him down and sort of Captain Ahab-ed him [Moby Dick]. Then he became my cloak of visibility—when I put it on, I can’t not be seen.

SIGT: So you have the cloak and the giant antlers from the Spectral Moon Moose. And of course, you have your mighty battle ax and your impenetrable shield. Tell me about your main natural defense.

Blöthar: The fact that I smell like a goat? Well, of course, my ability to lose my shit, as a Berserker—Berserk mode. I just sit around and take a lot of hallucinogenics and psych myself up, and I really become a different person in that situation. I’ve gone to a lot of therapy for it.

SIGT: How many therapists have you eaten?

Blöthar: A lot, man. Trying to get your rage under control and anger management for a Viking Berserker from space is a difficult job as a therapist.

SIGT: Are there any artists on the Rockville lineup you are excited to see?

Blöthar: The lineup is nutty. It sounds to me like Rockville is going to be where the party is this year. But I want Daytona wings. I want to find the source of Daytona wings. They have them at Hooters, which is my FAVORITE restaurant. At Hoots they have Daytona wings, which are just delicious. You know, everytime I ride down I-75 and see that Ocala sign, I imagine my retirement—living in a mobile home and scooping up little baby alligators with a tiny little net and selling them to tourists.