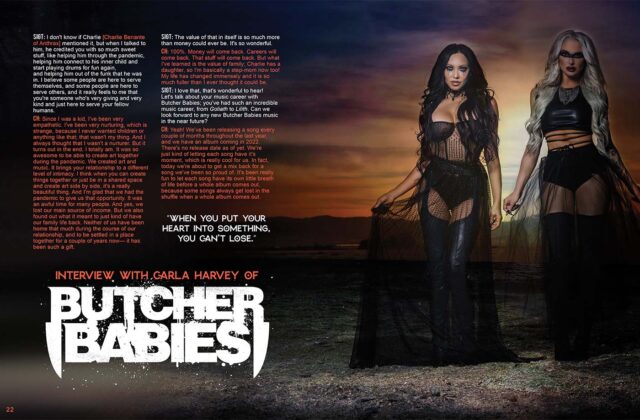 BUTCHER BABIES: Since I was a kid, I’ve been very empathetic. I’ve been very nurturing, which is strange, because I never wanted children or anything like that. That wasn’t my thing. And I always thought that I wasn’t a nurturer. But it turns out in the end, I totally am. It was so awesome to be able to create art together [with Charlie Benante—Anthrax] during the pandemic. We created art and music. It brings your relationship to a different level of intimacy. I think when you can create things together or just be in a shared space together and create art side by side together. It’s a really beautiful thing. And I’m glad that we had the pandemic to give us that opportunity. It was an awful time for many people. And yes, we lost our main source of income. But we also found out what it’s meant to just kind of have our family life back. Neither of us have been home that much during the course of our relationship, and to be settled in a place together for a couple of years now—it has been such a gift.

SIGT: The value of that in itself is so much more than money could ever be. It’s so wonderful.

CARLA: 100%. Money will come back. Careers will come back. That stuff will come back. But what I’ve learned is the value of family—Charlie has a daughter, so I’m basically a step-mom now too—my life has changed immensely and it is so much fuller than I ever thought it could be.

SIGT: I love that! That’s wonderful to hear. Let’s talk about your music career with Butcher Babies. You’ve had such an incredible music career, from Goliath to Lilith. Can we look forward to any new Butcher Babies music in the near future?

CARLA: Yeah! We’ve been releasing a song every couple of months throughout the last year, and we definitely have an album coming in 2022. There’s no release date for the album as of yet. We’re just kind of like letting each song have at it’s moment, which is really cool for us. In fact, today we’re about to get a mix back for a song we’ve been so proud of. It’s been really fun to let each song have its own little breath of life before a whole album comes out because some songs always get lost in the shuffle when a whole album comes out.

SIGT: It’s such a joy that you actually get to do that. And call the shots, doing it now independently with your band.

CARLA: And that was a scary change for us. We knew in our hearts it was the right thing to do if we wanted to take things to another level. We had been with Century Media since our first album. We love them. They gave us our first shot. But we wanted to go further than what we thought they could do for us at the time. It’s always a leap of faith when you leave a company that’s been great to you. You have to really believe in yourself. And I’ve done that my whole life, from the time I was 19 years old and decided I was going to move across the country from Detroit to LA to be a rock star. I’ve been taking these leaps of faith my whole life. When Butcher Babies started to tour, I had just gotten my dream job as an embalmer at one of the biggest funeral homes in LA. So again, I had to take a leap of faith—do I take my dream day job, or do I get on that bus and go on tour and live my dream? I feel that when you put your heart into something you can’t lose. That’s what I’ve always done my whole life. And that’s what we collectively did as a group when we decided to go independent—and it’s been awesome.

“when you put your heart into something you can’t lose.”

SIGT: Congratulations on always taking those leaps of faith, too. It’s so important for us to do as humans, just to grow. You’ve got to be your biggest cheerleader and really just be humble about it and just keep going.

CARLA: No one else is going to be your cheerleader if you’re not going to be your own cheerleader. In fact, most people will tell you “no,” even your greatest friends will tell you “no,” because it scares them to think of you not being in their life. It frightens people when they see strength in others sometimes, or a drive that they don’t have. It makes them envious and they can’t even explain why. But being an embalmer working in funeral homes, I really realized that life is so short, you never know when you’re going to go. And the best thing that you can do for yourself is to live your life to the fullest every day. If there’s something you want to do, you get off your ass and do it.

SIGT: When those feelings come about and you see somebody else who has a different work ethic than you or a different level of energy, you’re overtaken with some of these emotions or feelings. Sometimes you can’t explain it because we’re limited to a lexicon—words—and this is our primary method of communication. Sometimes there aren’t words for how you’re feeling.

SIGT: It’s certainly a lifelong commitment. It’s something that you have to want deep down in your soul. You’re a licensed mortician, a grief counselor, an End of Life Dula—which, I looked that up, and I love that—and you advocate for death positivity, which really encourages people to speak positively about death rather than negatively.

CARLA: Death doesn’t have to be the end of your dreams and hopes. I think that death exists so that we can “live” while we’re here. If we were just open-ended and could go on forever, I can’t even imagine the trouble that we’d get into. But it’s a way for us to set goals. And again, I encourage people to truly “live” and not worry so much about the end—dying.

SIGT: For sure, because it’s inevitable—we’re all going there at some point and you never know when.

CARLA: We’re all going, but Americans have made that really scary by kind of institutionalizing it—putting it behind closed hospital doors. Back in the day, grandparents would die in the home. You saw people age, you saw people getting sick and dying. The funerals were in the home. And I think that there was a lot more death positivity surrounding that because you saw the cycle of life. But nowadays it scares us so much.

SIGT: It’s very cold, whereas it is really warm to be around family and friends in the comfort of your own home, watching somebody who you’ve loved your whole life, or somebody who raised you, pass.

CARLA: So my goal is to bring funerals back to the home—not every funeral. To make it okay to die at home and to give people who are dying choices in that and to make it a more peaceful situation for them.

SIGT: That’s so beautiful. It’s such a way that’s very unique for you to give yourself to others and to help your fellow humans. You’re also an accomplished writer, from comic books to writing a novel. Do you have any plans to follow up Death and Other Dances?

CARLA: I do. I’ve written about half of it. Hopefully the other half will come out.

SIGT: Where do you get your inspiration?

CARLA: I was a huge fan of Charles Bukowski. I still am, obviously. And I believe that writing from your own life experience is the most powerful thing that you can do. Not only is it cathartic for the individual—and it kind of helps straighten out your own thoughts and feelings on life—but people want to know that there’s other people that feel the way that they do.If they know something is real and comes from your heart, your background, your stories, it gives them the strength to carry through.

SIGT: It’s that commonality that we all share which isn’t often voiced. You embody many meanings of the word “artist.” In addition to being a writer, a musician, and a mortician, you’re also a visual artist. You draw primarily sketches, and comic book illustrations. I checked out your art page on Instagram Pretty Girls Do Ugly Things (@prettygirlsdouglythings), which is fucking rad. Let’s talk about your art.

CARLA: I’ve always been inspired by death in my artwork. I think that all my art tells a story about a girl who’s spent half of her life in the death industry. I’ve been drawing since I was a kid. I fell in love with comic books at a young age, and that’s all I really wanted to do with my life was write comic books and play metal music. I got my wish.

“All I really wanted to do with my life was write comic books and play metal music.”

SIGT: That’s amazing. So many people just think and imagine, and then they never take those steps, like you were mentioning earlier, to actually bring those dreams to fruition.

CARLA: Yeah, I just knew what I wanted as a kid, and I didn’t have a great home life. I was abandoned by my dad at a young age, and I feel like I lived in kind-of a fantasy world to help me cope with that. I lived in a world of comics and music. So all those things have always been my best friend, my inspiration, and the things that I find solid comfort in even till this day. If I’m alone with a pad of paper and pencil, then I’m never lonely, never sad, never upset. I have that. And I think that’s truly a gift to have something like that which allows you to be by yourself, but never alone.

SIGT: You have such a bright, beautiful soul and it wouldn’t be there shining so bright without great struggle. And your journey is just so inspiring, not only to me but to many other humans around this rock that we’re on. Do you have any advice or words of wisdom for people, especially younger girls who want to express their creativity through art or music?

SIGT: You’ve hit several festivals so far on this run. What was it like watching the mosh pit explode at one of these bigger festivals, like Louder Than Life?

CARLA: Oh god, they’re the funnest. Seeing these kids scream the lyrics that Heidi and I wrote together back at us just filled me with so much gratitude. You can’t not have an amazing time when you walk out to a sea of people who are just jumping and screaming and doing huge pits. These people bring all their energy to make sure they tear up the pit for us too. Again, it’s another moment that makes us just full of gratitude.

SIGT: Is there anything else you’d like to say to the fans at Rockville this year?