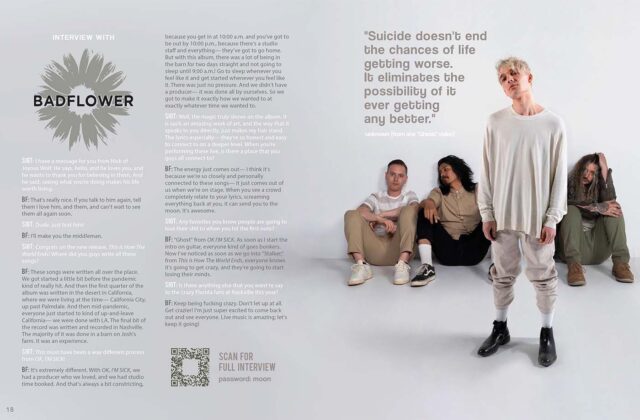 SIGT: I have a message for you from Nick of Joyous Wolf. He says, “Hello,” and he loves you. And he wants to thank you for believing in them. And he said, seeing what you’re doing makes his life worth living.

BADFLOWER: That’s really nice. If you talk to him again, tell them I love him and them and can’t wait to see them all again soon.

BADFLOWER: I’ll make you the middleman.

SIGT: Congrats on the new release, This Is How The World Ends! Where did you guys write all these songs?

BADFLOWER: These songs were written all over the place. We got started a little bit before the pandemic kind of really hit. And then the first quarter of the album was written in the desert in California, where we were living at the time—California City, up past Palmdale. And then mid-pandemic, everyone just started to kind of up-and-leave California—we were done with LA. The final bit of the record was written and recorded in Nashville. The majority of it was done in a barn on Josh’s [vocals] farm. It was an experience.

SIGT: This must have been a way different process from OK, I’M SICK.

BADFLOWER: It’s extremely different. With OK, I’M SICK, we had a producer who we loved, and we had a studio time booked. And that’s always a bit constricting because you get in at 10:00 a.m. and you’ve got to be out by 10:00 p.m, because there’s a studio staff and everything—they’ve got to go home. But with this album, there was a lot of being in the barn for two days straight and not going to sleep until 09:00 a.m.. Go to sleep whenever you feel like it and get started whenever you feel like it. There was just no pressure. And we didn’t have a producer—it was done all by ourselves. So we got to make it exactly how we wanted to at exactly whatever time we wanted to.

SIGT: Well, the magic truly shows on the album. It is such an amazing work of art and the way that it speaks to you directly, just makes my hair stand. The lyrics especially—they’re so honest and easy to connect to on a deeper level. When you’re performing these live, is there a place that you guys all connect to?

BADFLOWER: The energy just comes out—I think it’s because we’re so closely and personally connected to these songs—it just comes out of us when we’re on stage. When you see a crowd completely relate to your lyrics—screaming everything back at you—it can send you to the moon. It’s awesome.

SIGT: Any favorites you know people are going to lose their shit to when you hit the first note?

BADFLOWER: “Ghost” from OK I’M SICK. As soon as I start the intro on guitar, everyone kind of goes bonkers. Now I’ve noticed as soon as we go into “Stalker,” from This Is How The World Ends, everyone knows it’s going to get crazy, and they’re going to start losing their minds.

“Suicide doesn’t end the chances of life getting worse. It eliminates the possibility of it ever getting any better.” -unknown

[from the “Ghost” video]

SIGT: Is there anything else that you want to say to the crazy Florida fans at Rockville this year?

BADFLOWER: Keep being fucking crazy. Don’t let up at all. Get crazier. I’m just super excited to come back out and see everyone. Live music is amazing and let’s keep it going!