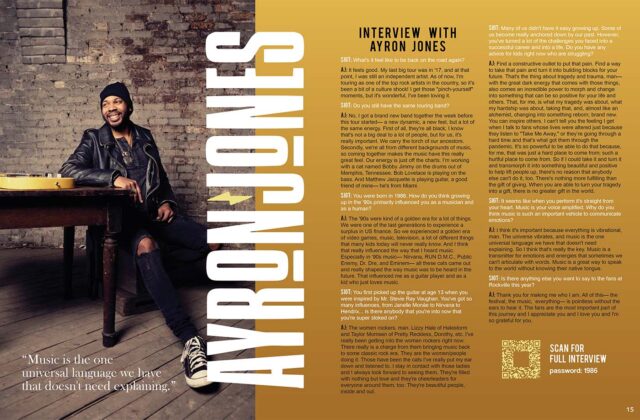 SIGT: What’s it feel like to be back on the road again?

Ayron Jones: It feels good. For me, my last big tour was in ’17, and at that point, I was still an independent artist. As of right now, I’m touring as one of the top rock artists in the country, so it’s been a bit of a culture shock—I get those “pinch-yourself” moments—but it’s wonderful. I’ve been loving it.

SIGT: Do you still have the same touring band?

Ayron Jones: No, I got a brand new band together the week before this tour started—a new dynamic, a new feel, but a lot of the same energy. First of all, they’re all black—I know that’s not a big deal to a lot of people, but for us, it’s really important. We carry the torch of our ancestors. And then secondly, we’re all from different backgrounds of music, so coming together makes the music have this really great feel. Our energy is just off the charts. I think it’s really wonderful. I’m working with a cat named Bobby Jimmy on the drums out of Memphis, Tennessee. Bob Lovelace is playing on the bass. And Matthew Jacquette is playing guitar, a good friend of mine—he’s from Miami.

SIGT: After Rockville, you’re heading overseas. You’re starting a tour in France. Have you ever toured overseas before?

Ayron Jones: First time playing overseas, man. I’m excited! I just went number one in Germany, and some of the same success I’m having here in the States, I’m having in Europe and I’m excited to see the fans for the first time.

SIGT: So you were born in 1986. How do you think growing up in the ’90s primarily influenced you as a musician and as a human?

Ayron Jones: The ’90s were kind of a golden era for a lot of things. We were one of the last generations to experience a surplus in US finance. So we experienced a golden era of video games, and music, and television, a lot of different things that a lot of kids today will never really know. And I think that really influenced the way that I heard music. Especially in ‘90s music—Nirvana, RUN D.M.C., Public Enemy, Dr. Dre, and Eminem—all these cats came out and really shaped the way music was to be heard in the future. That really influenced me as a guitar player and as a kid who just loves music.

SIGT: You first picked up the guitar at age 13 when you were inspired by Mr. Stevie Ray Vaughan performing. You’ve got so many influences, from Janelle Monáe to Nirvana to Hendrix… is there anybody that you’re into now that you’re super stoked on?

Ayron Jones: The women rockers, man. Lizzy Hale of Halestorm and Taylor Momsen of Pretty Reckless, Dorothy, etc. I’ve really been getting into the women rockers right now. There really is a charge from them bringing music back to some classic rock era. They are the women/people doing it. Those have been the cats I’ve really put my ear down and listened to. I stay in contact with those ladies and I always look forward to seeing them. They’re filled with nothing but love and they’re cheerleaders for everyone around them too. They’re beautiful people, inside and out.

SIGT: Many of us didn’t have it easy growing up. Some of us become really anchored down by our past. However, you’ve turned a lot of the challenges you faced into a successful career and into a life. Do you have any advice for kids right now who are struggling with their families or their parents? Any words of wisdom?

Ayron Jones: Find a constructive outlet to put that pain. Find a way to take that pain and turn it into building blocks for your future. That’s the thing about tragedy and trauma, man—with the great dark energy that comes with those things, also comes an incredible power to morph and change into something that can be so positive for your life and others. That, for me, is what my tragedy was about, what my hardship was about—taking that and, almost like an alchemist, changing into something reborn; brand new. You can inspire others. I can’t tell you the feeling I get when I talk to fans whose lives were altered just because they listen to “Take Me Away,” or they are going through a hard time and that’s what got through the pandemic, you know. It’s so powerful to be able to do that because, for me, that was just a hard place to come from; such a hurtful place to come from. So if I could take it and turn it and transmorph it into something that’s beautiful and positive to help lift people up, there’s no reason that anybody else can’t do it, too. There’s nothing more fulfilling than the gift of giving. When you are able to turn your tragedy into a gift, there is no greater gift in the world.

“When you are able to turn your tragedy into a gift, there is no greater gift in the world.”

SIGT: It seems like when you perform it’s straight from your heart. Music is your voice amplified. Why do you think music is such an important vehicle to communicate emotions?

Ayron Jones: Well, I think it’s important because everything is vibrational, man. The universe vibrates and music is the one universal language we have that doesn’t need explaining. So I think that’s really the key. Music is a transmitter for emotions and energies that sometimes we can’t articulate with words. Music is a great way to speak to the world without knowing their native tongue.

“music is the one universal language we have that doesn’t need explaining.”

SIGT: Do you have any advice for people looking for a creative outlet to communicate their emotions, whether through music or art, or something else?

SIGT: You have such a great style. You always look great on stage. Your accessories are on point—whether it’s hats, or jewelry—what influences your style?

Ayron Jones: I mean, I come from the black community. There is a swagger that comes along with that. Everything I came from, whether it be from my music or my culture, I’m always going to bring that forward on the stage. I think rock and roll has maybe lost a little bit of it’s swagger in the last 15-20 years. Cats are kind of being a little more basic about the way they present themselves on stage. It was really important to me to follow in the footsteps of cats like Lenny Kravitz, who was just as fashionable on stage as he was off. And “black” is just the way that I express myself. Black is a universal color, black is all the colors at one time. I put on vintage jewelry to pay homage to the past, that’s why I’m here. Everywhere I go I’m either at the vintage shop or the pawn shop looking for vintage jewelry.

SIGT: Is there anyone else on the Rockville lineup you’re stoked to see?

Ayron Jones: Man, I’m just stoked to be here honestly. As a kid who came from nothing and, statistically speaking, is not supposed to be here, I’m just thankful and happy to be sharing the stage with the artists that have changed the rock world for the better, man. That’s honestly from the bottom of my heart. That’s the way I feel.

SIGT: Is there anything else you want to say to the fans at Rockville this year?

Ayron Jones: Thank you for making me who I am. All of this—the festival, the music, everything—is pointless without the ears to hear it. The fans are the most important part of this journey and I appreciate you and I love you and I’m so grateful for you.