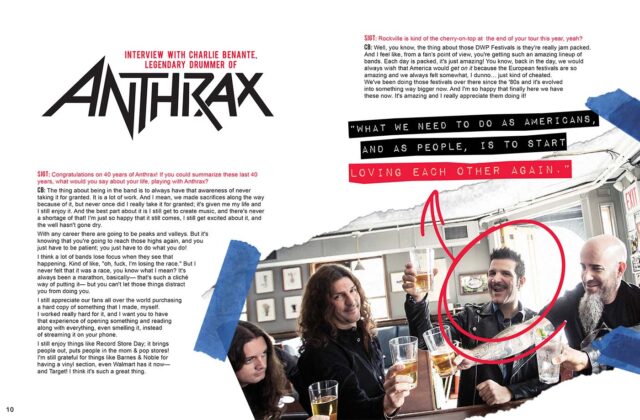 SIGT: Rockville is kind of the cherry-on-top at the end of your tour this year.

CB: Well, you know, the thing about those DWP Festivals is they’re really jam packed. And I feel like, from a fan’s point of view, you’re getting such an amazing lineup of bands. Each day is packed. It’s just amazing. You know, back in the day, we would always wish that America would get on it because the European festivals are so amazing and we always felt somewhat, I dunno… just kind of cheated. We’ve been doing those festivals over there since the ’80s and it’s evolved into something way bigger now. And I’m so happy that finally here we have these now. It’s amazing and I really appreciate them doing it.

SIGT: Congratulations on 40 years of Anthrax! If you could summarize these last 40 years, what would you say about your life, playing with Anthrax?

CB: The thing about being in the band is to always have that awareness of never taking it for granted. It is a lot of work. And I mean, we made sacrifices along the way because of it, but never once did I really take it for granted. It’s given me my life and I still enjoy it. And the best part about it is I still get to create music, and there’s never a shortage of that. I’m just so happy that it still comes and the well hasn’t gone dry. And I get excited again about it.

I think a lot of bands lose focus when they see that happening. Kind of like, “oh, fuck, I’m losing the race.” But I never felt that it was a race, you know what I mean? It’s always been a marathon, basically—that’s such a cliché way of putting it—but you can’t let those things distract you from you and doing you.

I still appreciate our fans all over the world going in purchasing a hard copy of something that I made, myself. I worked really hard for it, and I want you to have that experience of opening something and reading along with everything and smelling it getting in, instead of streaming it on your phone.

I still enjoy things like Record Store Day, it brings people out—it puts people in the mom & pop stores. I’m still grateful for things like Barnes & Noble for having a vinyl section, even Walmart has it now—even Target. I think it’s such a great thing.

SIGT: I want to talk to you about your new record, Silver Linings. You can feel the fun and the love in those jams. How did you ease into creating this album?

CB: The way this record was created was—it wasn’t even thought of as a record. It was just kind of getting me through the pandemic. Not making me sink even deeper into a depressing funk. My girlfriend Carla [Harvey, Butcher Babies] was watching me glued to the TV and my phone about this pandemic. Like everybody else, we had questions that we weren’t getting answers to. I was spiraling, you know… And I know a lot of other people had that feeling too. So, she’s the one that said, “you have to stop and you have to shut this off and you need to go be creative again. Go do something.” And that’s what I did. This was around the time Neil Peart died [RIP]. I was really, really bummed out about that. And I started to just play [drums] again.

I had this idea of doing a cover version of a Rush song. So I called up my friend Alex Skolnick [Testament] and Ra Diaz [Suicidal Tendencies] and we did a little Rush jam. It was so much fun. We put it out that people reacted to it. It just kind of snowballed. I started to think about things like when I was a kid, getting home from school, playing my drums with headphones on, and playing along to records. So that’s what I started to do again. Then I called some other people who were going through the same situation as I was. And they were so happy to do it. The record company that put it out, Megaforce Records [since 1982], just wanted to do vinyl. I was cool with that!

The thing I told everybody who is a part of each song [from D.M.C. to Corey Taylor] was, for me, the most important thing is the attention to detail. Put a little bit of yourself, but please, let’s try and stick to it the way it was, because that’s the beauty of it—having it sound like the time it came from.

I recorded most of it on my Roland kit. I would find isolated drum sounds from the original tracks or something off of the record it came from. I would get an isolated snare drum or kit drum or whatever, and then I put it into the Rol’ and built a kit around that. So it would sound as if I was playing that kit. When everybody heard the tone, I think they were like, “oh, yeah, I gotta fucking kind of match that.”

“What we need to do as Americans and as People is to start loving each other again.”

SIGT: I know a lot of us were really stuck in this funk. And some of us still are. Would you have any humble advice for anybody who’s still dealing with some of the darker elements of being in this depression that we were kicked into?

CB: The thing that I said during the whole thing is I was pushing myself to get out of that funk and use the time wisely. And I see a lot of people did not use the time to their benefit. I was so happy that I had a chance to work on music and art, two things that I love. I know sometimes things look very bleak, but what we need to do as Americans and as people is to start kinda loving each other again. Stop hating on the other guy’s beliefs, or on the other guy’s color, or on the other guy’s sports team… we need some healing.
And that’s the thing about it in music—Music is such a universal healer. I wish people would get back into that whole love thing and stop hating each other. Find inspiration—I don’t care who it is. I don’t care if it’s some seven year old kid on YouTube that inspires you to take your drums out today. Do something today.

I think everybody needs a little tap on the shoulder some time that says, “hey, man, wake up! Life’s passing you by.”