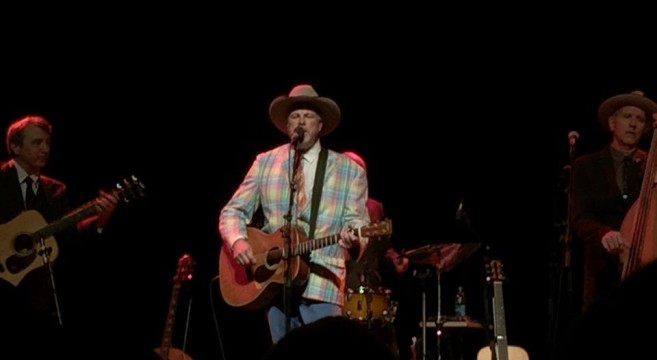 Robert Earl Keen confessed that he wasn’t sure where the band was headed for their Sunday night gig. Ponte Vedra sounded like a place that Keen played a year ago. He was initially dismayed. The other show was actually in Mexico, where Keen,

fell out of a boat and hit my head, and my wife almost got arrested.”

Robert Earl Keen has a show full of such fantastic, humanizing stories, that inform his music. He puts on a professional performance flanked by a stage full of outstanding musicians. Yet, his stories recount the shit that you and your friends would get into if Lyle Lovett was your college buddy, and the likes of George Strait covered your songs.

There is a million mile gap between what you hear on country radio and the music that Robert Earl Keen makes. Keen is certainly a country musician. But, there is a quality to Keen’s music that transcends genre. He has the ability to bridge gaps in taste while remaining true to his craft, much like the way that Run the Jewels does with hip hop. Like it or not, its quality is apparent.

A Robert Earl Keen crowd is hip to his deep catalog and pining to hear their favorites. He has a ton of stand outs. Two of those tunes stand out especially well live, “Corpus Christi Bay” and “Front Porch Song.” Keen played the former about halfway through his two plus hour set. It’s a tune about that town that is no good for you. “I never could stay sober/on the Corpus Christi Bay,” the last syllable drawn out like a self-aware drunk does while trying to put the brakes on a slur.

“Front Porch Song” is one that illustrates the creative process in its most ideal form. The crowd was beyond ready for it when Keen came out for an encore. Some half-cocked dude, who’s apparently oblivious to setlists, yelled out for the song just as Robert Earl strummed the first chord. Ole Half-Cocked simply received a coy, yet firm glance before getting his wish.

As Keen told it Sunday night, he and his roommate frequently sat on their front porch playing music while students at Texas A&M University. They would play some classic Jimmie Rodgers, then a few of their own. Folks would loiter and enjoy. Every once in a while a skinny kid on a bicycle would ride up and listen a while.

After Keen and his buddy were done with a song, the skinny coed would complement their playing and move along. One day, their slight admirer mentioned that he played guitar as well and Keen’s buddy, likely in a similar state as our hero Half-Cocked, handed over his ax. The kid played the most beautiful song Keen had ever heard and introduced himself as Lyle Lovett.

These visits became a regular affair. One day, Lovett heard Keen play part of an unfinished song and asked if he could work on finishing it. Keen readily agreed, and when Lovett came back to play the finished version of “Front Porch Song,” Keen and his buddy were floored. Lovett had only heard the song once, yet he remembered every word and every guitar lick. Again, Keen thought it was the most beautiful thing he had heard.

The two remain friends and frequent collaborators. Keen mentioned that Lovett joined him on stage for a cover of an old Bill Monroe tune earlier in their recent tour. Ponte Vedra settled for Keen’s longtime bassist singing the Lovett part. No one cared. Keen’s band is outstanding.

They recently released a bluegrass album titled Happy Prisoner: The Bluegrass Sessions. Consequently, the current touring band consists of a fiddle, upright bass, two acoustic guitars, dobro, mandolin, and “the only bluegrass drummer in the world.”

Their set was tight and well balanced. Keen placated the rowdy-for-a-Sunday crowd with old favorites, including the aforementioned staples along with tunes like “The Road Goes on Forever.” The room was also treated to a sampling from the new album. Refreshingly, Keen acknowledged the sold out crowd’s effort in making it out on a Sunday night.

Ponte Vedra Concert Hall continues to prove itself acoustically superior to any other venue in North Florida; and it’s clear that great acts are becoming hip. Folks will continue to make the trek out to Ponte Vedra, even on a Sunday night. Robert Earl Keen and his Band were another in a long line of great performances.