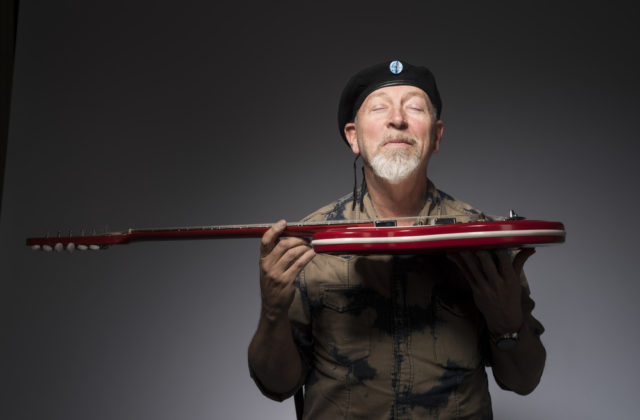 A LOOK BACK: “The Perfect Batch of Fish N’ Chips” | Richard Thompson Live Review | February 15, 2017 at The Plaza Live

The room is rapt. Nearly every concert goer is silent, leaning forward in anticipation. Which, if you are sober, and I am, and self-aware, which I was channeling on this occasion, can be a really good thing. Richard Thompson bounds to the microphone at The Plaza Live like an aggressive Leonard Cohen — tall, handsome, immensely talented and profoundly loved.

Wearing his trademark beret, pants that look like a Princeton gridiron star from the 1940s, and a smile betraying his self-assuredness, Thompson opens with a crowd-pleasing rendition of  “Bathsheba Smiles.” Thompson’s visits to Florida are infrequent, instilling a longing in his Sunshine State contingent. Heads are nodding, knees gently slapped — a few folks who are missing either the self-aware or sober chip at the moment sing audibly.

Any one of these distractions could alter the experience of seeing a legend live, but on this night it does not. Thompson’s tunes are a perfectly fried batch of fish n’ chips with a twist of lime. A large subset of society may not crave it, but its taste is recognizable, appreciated, and powerful. Thompson’s guitar playing, vocals, and songwriting are the fish, chips, and lime in the sanguine compositions that are Richard Thompson songs.

Thompson’s best-known song, “1952 Vincent Black Lightning,” gets unceremoniously plugged into the middle of his set. Thompson fiddles around with tuning for a few moments before announcing, “In this song, there is a boy, a girl, and a sacred object.” The unassuming introduction belies the power and beauty of the song.

“1952 Vincent Black Lightning” showcases all three of Thompson’s signature ingredients — slick guitar playing, affective vocals, and scrumptious storytelling. The tune is a classic boy meets girl tale with an ultra-hip motorcycle at its focal point. A smattering of cheers rises up from the crowd as we process the early treat. Thompson is not even a half hour into his set before playing the legendary tune.

The camaraderie one feels at a show like this begins to surface. The crowd begins to loosen a bit. Requests start to float from a few rows back. A seasoned professional, Thompson brushes off the unsolicited requests in stride and keeps doing his thing. His thing, most notably, is playing incredible guitar.

Thompson’s playing is the feature of the dish. And we have all come to consume that particular treat. Thompson knows he is not going to sell out arenas and even makes a comment about our place in society. We, his adoring audience sitting here on a Wednesday night, listening to a guy whose last hit was over forty years ago, may be a little weird in the eyes of society.

If falling for lyrics like, “I found your picture in the corporal’s pocket/His cold fingers pressed it to his chest” make us weird, then save me a place on the fringes. “Sniper’s bullet took his eyes and his breath away,” the song goes on to say. My breath suffers a similar fate as Thompson croons.

The narrator of “Woods of Darney” goes on to fall in love with the subject of the picture. They marry but the specter of her former lover haunts the soldier. As he is called back into duty, his complicated allegiance begins to show.

The trio of ingredients that make Thompson blend satisfyingly as he finishes the story. His voice conveys a soldier’s sense of duty. His guitar speaks the love his narrator feels for the woman. And this time, it is the lyrics, the expert storytelling that captivates. We are all in love with his voice, storytelling, playing, and presence.

“Woods of Darney” encapsulates the relationship between Thompson and his crowd — non-traditional, undying love. Perhaps we are weird for craving fish and chips. The next time Thompson comes around, we will certainly be ordering another helping of his guitar with the complement of those lyrics and a twist of vocals.