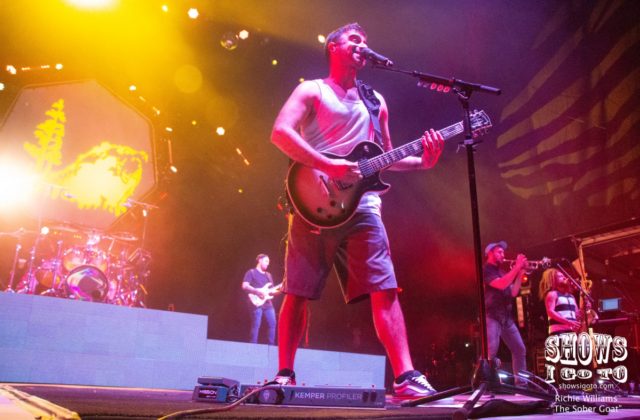 Is this this kind of show that you wanna see? Yes.

Whenever Rebelution comes to town, I try to clear my schedule and plan to make it to the show no matter what. This time around, the Orlando show is conveniently on a Friday.

However, this is no ordinary Friday. It also just so happens to be my father’s birthday. My father passed away almost two years ago, so to celebrate in his honor, I take the day off work and drive from Orlando to Cape Canaveral (Cocoa Beach) to visit my stepmother and see Dad’s memorial site on the beach where his ashes are buried. I spend the morning and afternoon chillin’ on the beach. Dad’s nickname was Bud, so naturally I enjoy plenty of Budweiser in his name. This Bud’s for you, Bud. Cheers. 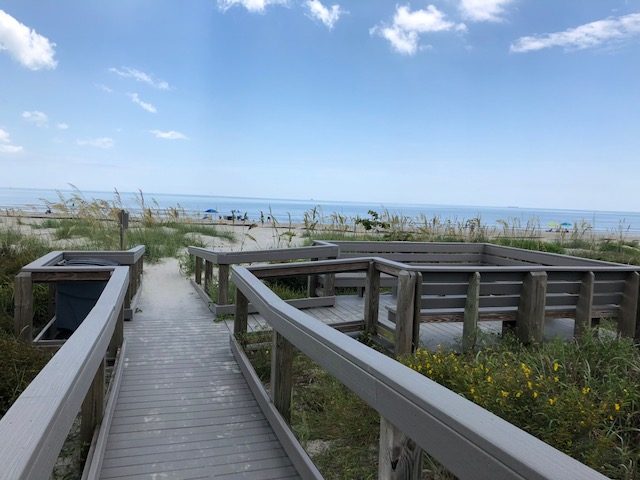 I start to make my way back to Orlando around 5:00 PM just in time to drive through the heart of the monsoon lightning storm looming over the Orlando area. I make it home, get ready, pick up a friend, and head to the Orlando Amphitheatre for Rebelution’s “Free Rein Summer Tour” with special guests Stephen Marley, Common Kings, Zion I, and DJ Mackle.

There was plenty of rain that probalby delayed some of the beginning of the show and might have affected some set times. I don’t arrive to the parking lot until Common Kings are already on stage. I listen to the rest of their set as I make my way to the box office, through the entrance, to the restroom and end up at the bar. They were great background music for that little adventure. I’ve listened to Common Kings every now and then over the past year and wish I could have made it to the show earlier. Hopefully they come back to Orlando soon.

Common Kings played a full set or nearly full set of 45 minutes. However, I think Stephen Marley’s set time was shortened as he only played six songs, maybe 30 minutes worth. It’s pretty easy for him to get the energy flowing at a show, as is the case with any Marley. His set ends with a cover of his father’s legendary love anthem “Is This Love,” which has every soul bouncing together and singing along. Also, the sunset just before Stephen Marley took the stage was so unbelievably beautiful and produced the perfect vibe for a fun evening of reggae dub. 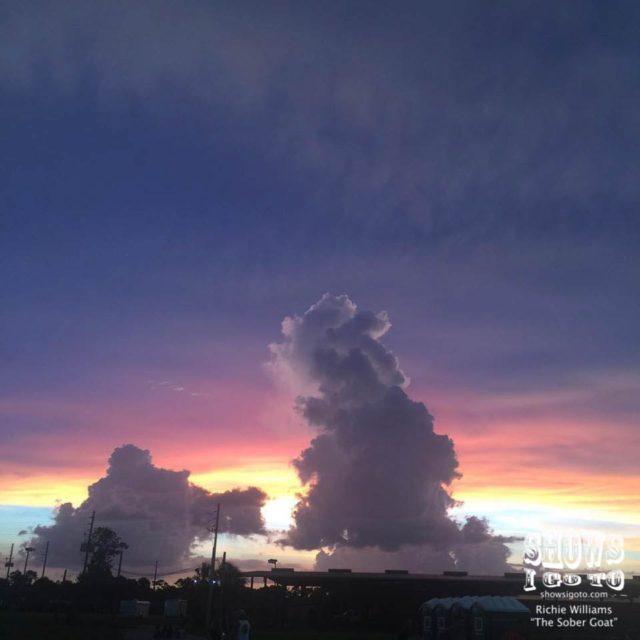 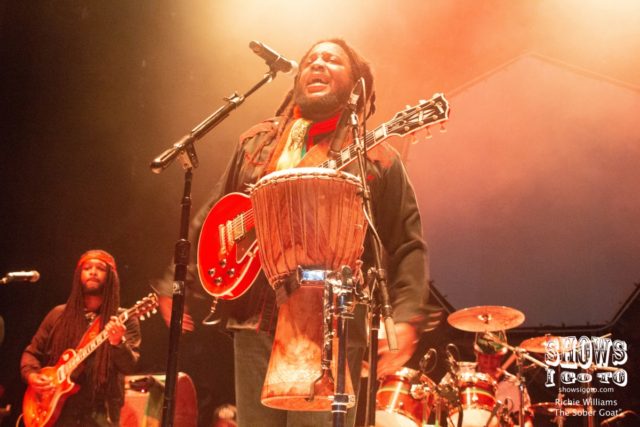 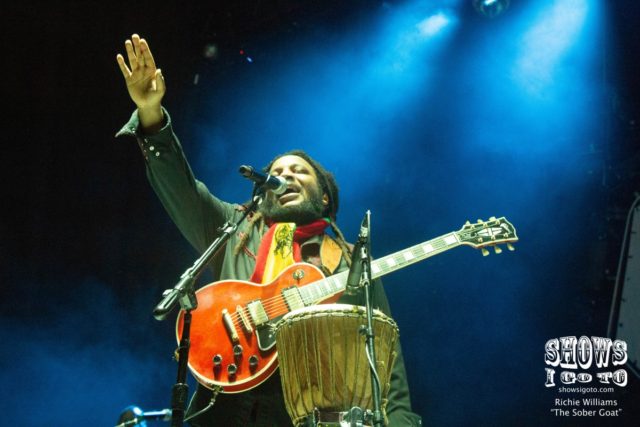 The time finally came for Rebelution to take the stage and get this party into full swing. I make my way to the photo pit which was practically empty during Stephen Marley’s set, but is now nearly full with a bunch of beautiful and dancing VIP fans. The boys come out swingin’ big, playing “Safe and Sound” and “Attention Span” back to back. These two songs are old school classics from their 2007 debut album Courage to Grow and they start the show off with high energy vibes. 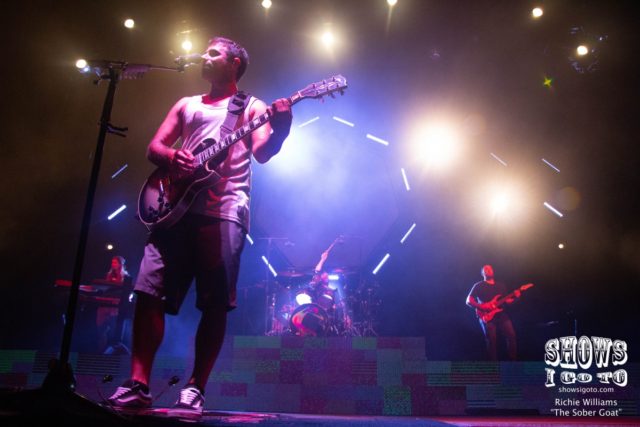 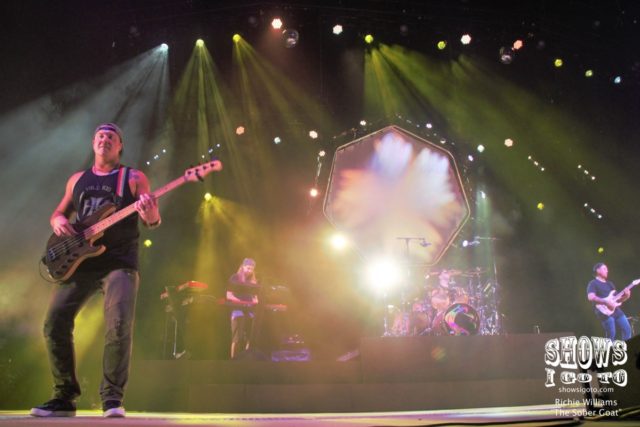 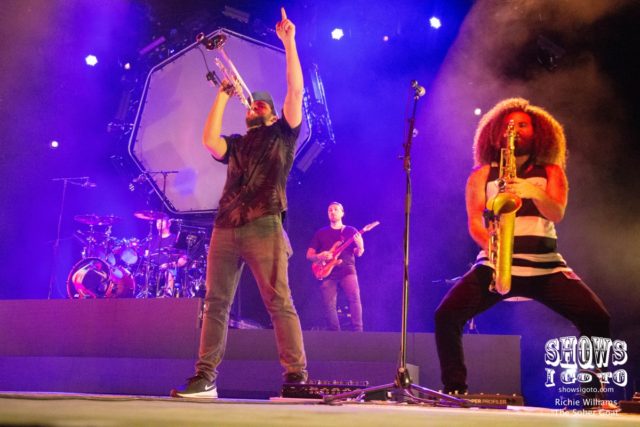 They slow things down with the next song, “Lazy Afternoon” from 2009’s Bright Side of Life album. Rebelution’s song catalog contains a mix of tunes from heavy dub vibes to slower beach tunes to roots reggae, and exclaim passionate topics about personal growth & devotion, smokin’ herb, and chillin’ with the one you love. Watch my clip of “Lazy Afternoon” on the The Sober Goat’s Instagram.

Oh, and they can even get a little political… right before they get smokin’, of course. Watch my clip of the transition from “Change the System” into “So High” on the The Sober Goat’s Instagram.

Certainly one of the main features of Rebelution’s shows are the dual horn players who help add even more dancing sounds to bounce to. This is positive happy music, people. 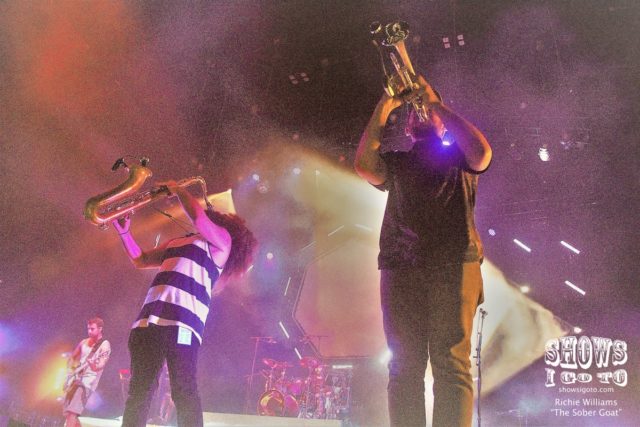 A few highlights for me from the middle of the set included “Count Me In”, “Fade Away”, “Heart Like A Lion” and “Bright Side of Life”, the latter of which is in the video clip below from The Sober Goat’s Twitter. 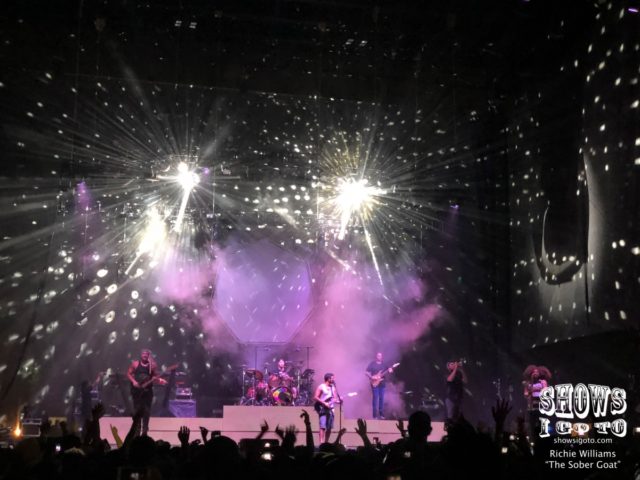 Any Rebelution show is guaranteed to included a few songs that hopefully never leave the setlist rotation. These songs would be”Feeling Alright”, “Roots Reggae Music” and “Sky Is the Limit” (off 2012’s Peace of Mind). These three songs end the regular set for tonight’s show as the band takes a quick minute off stage only to return with a three-song encore featuring “Inhale Exhale” (off 2016’s Falling into Place), “Legend” (off the new album Free Rein) and finishing the show with “De-Stress”. 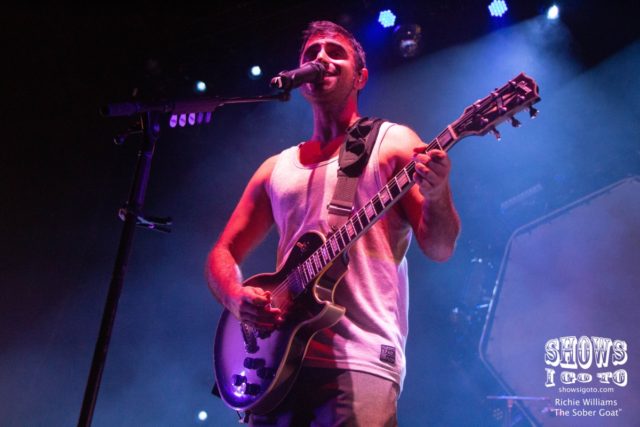 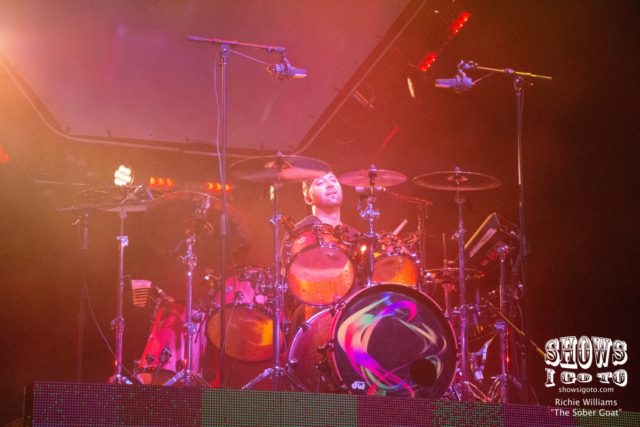 Rebelution played a solid show and delivered a stellar professional performance. I’ve seen this band at least a dozen times and they keep impressing me every time. The setlist included a balanced and well mixed collection of old and new tunes. These reggae kings are certainly earning their FREE REIN of the dub kingdom.

Check out Rebelution’s setlist below thanks to setlist.fm.