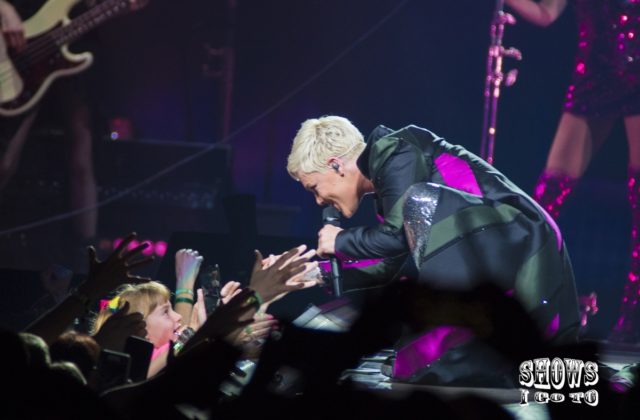 My wife is a huge fan of pop music so naturally we’ve seen many of the bigger names like Lady Gaga, Katy Perry, and Justin Timberlake. These artists aren’t normally my forte, but about five years ago she brought me to a Pink concert at Amway Center.

To be honest, I was more excited about The Hives opening the show than I was about Pink but that all changed once she hit the stage. At that point, I only knew the hits but that didn’t even matter because her stage show was so amazing, I didn’t care what she played. Ever since that wonderful night five years ago, I’ve been a legit Pink fan.

Pink just released her seventh studio album Beautiful Trauma in October of last year. She has been playing sold out shows around the world for the last few months. Pink’s Amway Center show had been sold out for months so I knew how lucky I was just to be in that building and I could not have asked for better seats. For the next two hours, Pink took us on a journey through her discography while showcasing some songs from Beautiful Trauma.

The singer started off the night with one of her biggest hits that helped get her where she is today, “Get the Party Started.” This song got everyone on their feet and set the tone for the party that was to come over the course of the night. One by one Pink blazed through the hits, “Just Like a Pill,” “Who knew?” and the title track of the tour and new album, “Beautiful Trauma.” For the new song “Revenge,” Pink brought out a giant blow-up doll with Eminem’s likeness who is also featured on the song as well.

One of the best moments of the night was when Pink did a mashup of my favorite song “Funhouse” with No Doubt’s “Just a Girl.” She then followed it up with a scathing cover of Nirvana’s “Smells Like Teen Spirit” complete with a flannel costume change. The theatrics of this show were top notch. From the perfectly choreographed dancers, to the back-up band that didn’t miss a beat, this show did not disappoint in the slightest. The night seemed to fly by with Pink playing hit after hit and not even stopping to catch her breath. What amazes me about this woman is that while most pop stars use precorded vocals, Pink actually sings live. The amount of stamina this woman has to do the high energy stunts she does on stage and still sound great, is be off the charts.

Just when I thought the night couldn’t get any better, Pink finished her main set with two of my all-time faves, “Raise Your Glass” and “Blow Me (One Last Kiss).” I could feel the positive energy of the fans around me, many of whom were seeing one of their favorite artists for the first time. The feeling was so invigorating that I could have left right then and still been satisfied….. but I’m glad I didn’t.

The encore was the most magical part of this already spectacular night and the reason I will continue to go see Pink every time she comes to town.

She strapped herself in a harness as she flew around the entire arena singing one of her biggest hits, “So what.” I have never seen another artist do the things that Pink does and that’s what sets her above the rest of her peers. She is on another whole level of artistry which cannot be touched.” Pink returned to the stage one last time to give a heart wrenching rendition of “Glitter in the Air.” In the past, she used this song to perform acrobatics while hanging in the air, but this time she did a stripped down version of the song which seemed more fitting. It was a beautiful way to end an action packed evening of fun.

No matter what genre of music you like, Pink has something that can appeal to everyone. She is a modern day legend and as long as she continues to put on shows like this, I will keep coming back to see her.

I wanted to give a huge shout out to James Strassberger who did an amazing job of shooting this show. He has been killing it at everything he does and has proven himself to be a great addition to our family at Shows I Go To. <3
Pink Live Review by Trevor Bosmans.
Pink Photos by James Strassberger.