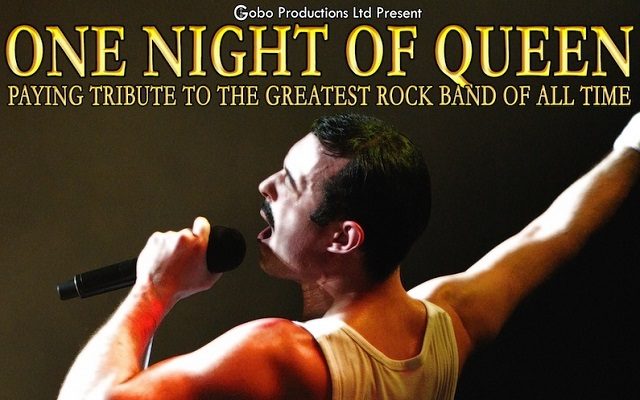 Scaramouche, Scaramouche, will you do the Fandango? Maybe you’re just a poor boy from a poor family and want to win free tickets to a show. Want to do the Fandango when One Night of Queen brings their touring stage show paying tribute to the stage theatrics and music of Queen to The Plaza Live in Orlando on Sunday, April 24, 2016? Easy come, easy go, will we let you go? Enter the ticket giveaway contest below to win 2 tickets to the show AND 2 cold craft beers from our sponsors, Barley and Vine Biergarten! British classic rockers Queen were one of the world’s biggest classic rock bands and still are today. Frontman Freddy Mercury was a master of escalating his voice within a few bars from a deep, throaty rock-growl to tender, vibrant tenor, then on to a high-pitched vocal melody ornamentation so pure and crystalline in the upper reaches a broad range of singing voices. Queen released a total of 18 number one albums, 18 number one singles, and 10 number one DVDs. Estimates of their record sales generally range from 150 million to 300 million records, making them one of the world’s best-selling music artists. And to top it off, they were inducted into the Rock and Roll Hall of Fame in 2001.

Who hasn’t belted out the lyrics to Bohemian Rhapsody at some point in their life while driving in the car with some friends? I can only think of the movie “Wayne’s World” every time I hear this song. I think that song being featured in that movie really helped Queen explode in the early 1990’s. “Wayne’s World” director Penelope Spheeris initially thought the tune wasn’t right for the film, but star Mike Myers insisted it was, and prevailed. And it’s a good thing he did — so beloved is the scene now that it’s hard to find anyone who doesn’t associate “Bohemian Rhapsody” with “Wayne’s World.”’ In fact, in the weeks after the movie’s release, the song rocketed to #2 on the Billboard singles charts, giving new life to a song that was almost 20 years old at the time.

One Night of Queen is performed by Gary Mullen and The Works, a band headed by Freddie Mercury imitator Gary Mullen, who had previously won the competition show Stars in Their Eyes with his vocal and visual imitation of Mercury. The other members of the band are Davie Brockett on guitar, Jon Halliwell on drums, Billy Moffat on bass and Malcolm Gentles on keyboards.

In 2000, Gary Mullen won ITV’s “Stars In Their Eyes” Live Grand Final, with the largest number of votes ever received in the shows history. The record of 864,838 votes was more than twice that of the runner-up. Gary began touring on his own and in 2002 formed a band ‘The Works’, to pay tribute to rock legends Queen. Since May 2002, ‘Gary Mullen and the Works’ have performed throughout the UK, USA, Europe, South Africa and New Zealand to sell-out audiences. The outfit have also twice rocked the prestigious BBC Proms in the Park, in front of a very enthusiastic crowd of 40,000. Check out this video of them performing at the 2009 BBC ‘Proms In The Park’ event in Hyde Park, London.

One Night of Queen is a spectacular live concert, recreating the look, sound, pomp and showmanship of arguably the greatest rock band of all time. They have been touring for over 13 years and 2016 will be their 9th Consecutive US Tour. One Night of Queen is not just another Queen cover band. This is going to be a night full of Queen songs performed by musicians who love Queen as much you and I. The show provides many of us a chance to hear these songs live for the first time in an environment surrounded by fellow fans. Check out One Night of Queen’s promo video!

Whether it’s “Somebody To Love”, “We Will Rock You”, “Another One Bites the Dust”, “Bicycle Race” or “Fat Bottomed Girls”, One Night of Queen will do it right and leave you satisfied. Don’t miss your chance to see America’s greatest Queen tribute, One Night of Queen at The Plaza Live! This show will ROCK you!

Want to Win 2 Tickets to ONE NIGHT OF QUEEN at The Plaza Live in Orlando, FL on Sunday, April 24, 2016 AND 2 cold craft beers from our sponsors, Barley and Vine Biergarten?! There are several ways to enter!*

Step 1: Complete one of the tasks.*
Step 2: Fill out the entry form.

3. Add ‘Showsigoto’ on Snapchat (Easy Instructions Here), Snap Message us a screenshot of this giveaway (Bonus Points for sharing this giveaway on your Snap Story). One Night of Queen Ticket Giveaway Orlando by Richie Williams, The Sober Goat.