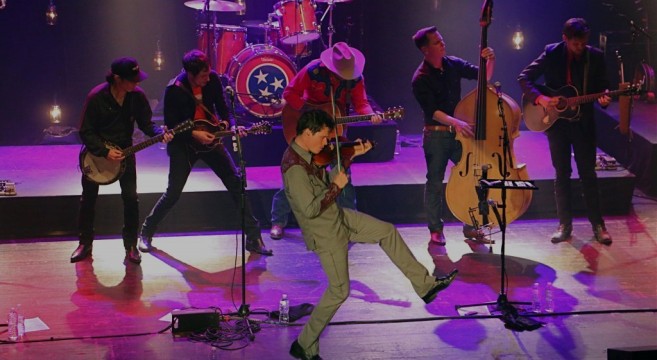 There aren’t many reasons why you’d want Ketch Secor to remove his fiddle from its semi-permanent residence on his country-n-western embroidered shirt collar. Unless, it was just to let the poor instrument cool down for a minute — and switch it out for his mandolin and harmonica. Or, maybe you wouldn’t mind if the talented Old Crow Medicine Show lead-crooner ceased his frenzied string-sawing for a moment, merely to give your feet a quick respite. I reckon you might even be okay with him dropping his frayed bow and wooden music-maker for a second to welcome “all the hillbillies from Mt. Dora and surrounding areas,” just as he did Thursday evening. But generally speaking, when Secor and his gritty, gifted veteran 6-piece old-timey roots band from Nashville start playing for you, you don’t ever want them to stop.

And that was really my only concern on a carefree early summer evening in Orlando at this House Of Blues concert-turned-barn dance. As I tapped and twirled my cowgirl boots thru a two-hour kick-ball-change dancercise — a workout that included a dynamic Devil Makes Three warm-up — my biggest problem was the reality that the punk-bluegrass shindig I was knee-deep in, would sadly, eventually end. As the kids say: the struggle was real, y’all. 🙂 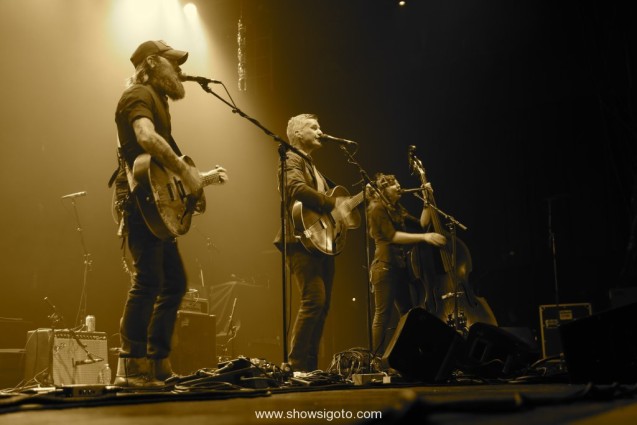 Often, an opening band is an up-and-coming artist touring with a big act to gain notoriety. This is certainly not the case with The Devil Makes Three, which does quite well as on their own as headliners, selling out shows everywhere with a dedicated, eclectic following — including a newly-acquired advocate in yours truly. The trio — guitarist Pete Bernhard, stand-up bassist Lucia Turino and banjo/multi-instrumentalist Cooper McBean (who was destined to play in a country band with that awesome name), turned out to be the perfect undercard to the main act this night. With their unique brand of 1920’s/30’s ragtime feel music, deliciously dark lyrics and irresistible harmonies, TDM3 played beautiful, aged instruments which complimented their charming, rusty old-timey sound. They swayed, jumped and danced while playing a number of favorites from their four full-length albums, including (Jack Daniels) “Old No.7,” “Graveyard,” and “Hallelu,” throwing some serious heat in the first few innings of a bluegrass ballgame. The crowd was on their feet and in the aisles in no-time flat.

No, you couldn’t swing a dead possum around that stompin’ ground without hitting folks gettin’ down — like, hoe-down down. Nooks to crannies under those rafters were inhabited with happy clod-hoppers unable to stand still with the amiable amalgamate of banjos, guitar, stand-up bass, mandolin, fiddle, and drums, inciting waves of synchronized head-bobbing.

After a quick halftime, it was 9:01pm, and Secor, donning Mickey Ears, burst out on stage as curtains opened and the boys started in on “Brushy Mountain Conjugal Trailer,” a rockin’ jailhouse romp — a ditty that seemed like it might’ve set the bar too high too early. But, before my legs could catch their breath, OCMS had rolled seamlessly and speedily into “Alabama High Test.” The whirlwind dervish of furious fun was in full swing and staying there.

When they did slow down (a little), the six skilled showmen entertained with games of musical chairs; exchanging instruments, and taking turns at the lead mic — and turns dancing. Critter Fuqua (what a moniker!) got in some 1-leg boot scootin’ while strumming his guitar, Secor and Chance McCoy (again, are they making up these names?) hopped around, backs to each other while dueling on their fiddles and the main mandolin man in the outfit, Cory Younts, kept everyone revved up with intermittent hilarious high-stepping jigs and shimmies across the platform. Younts might’ve been the overlooked MVP of the night, as he even gave his rapidly-increasing adoring fans a whistling solo during “C.C. Rider.”

A handful of times during a stacked setlist of tunes from all five studio albums, Secor shot the breeze with us while his crew kept strumming behind him. Grinning and wild-eyed, in his careful country drawl, the charismatic leader waxed poetic about life in the south, mostly as segues into the next number.

“This is the best time of the year to be in Florida, y’all! It’s the end of spring, crepe myrtles are bloomin’ and northbound Canadians are leaving… And blonde-haired girls named Caroline are coming to the Sunshine state…”

And then they were off and rollicking again with “Caroline,” from their 2008, Tennessee Pusher, record.

We received special treats in the form of covers of Tom Petty’s “American Girl” in the encore and “Seminole Wind” (John Anderson) — they know their audience and Florida’s capitol city. And of course, they didn’t forget to give us a rowdy performance of fan-favorite, “Wagon Wheel.”

As they were winding down, Secor, Younts, Chance McCoy, and Fuqua stepped to the edge of the stage for a lovely acoustic rendition of “I Hear Them All,” from the 2006 release, Big Iron World.

Clearly this wasn’t OCMS’s first rodeo. No, this polished ensemble of bonafide multi-instrumental musicians has been at the record-making and touring business for almost two decades. And before that, Secor and the other co-founder, banjo/guitar player Fuqua were street-corner buskers in western North Carolina in the late ’90s. At the beginning of 2015, in their 18th year as OCMS, they took home their first gold gramophone statue with “Best Folk Album,” for Remedy — something their founder reminded us, with some bonus commentary.

“We were very grateful to have won a Grammy for our Remedy record recently. But we’re still not quite sure what “folk music” is. The music we play is country — country!”

Thank goodness for that. I just wish they were still playing it for me.