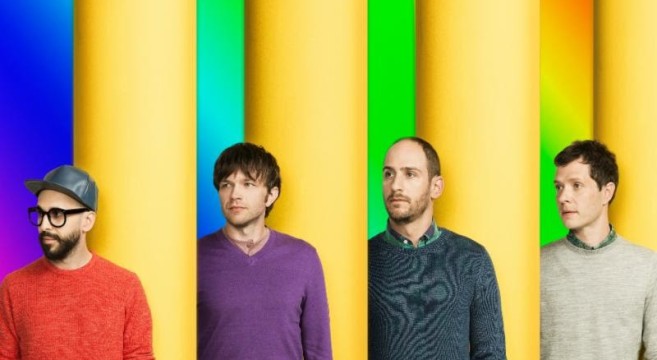 We can all agree that over the last 15 years OK Go has made some of the best videos ever. Since the debut of their music video turned viral video “Here It Goes Again,” the band has continued to try and outdo themselves with each new video.

Their newest video for “ The Writing’s on the Wall” is no exception. They use a series of optical illusions to totally fuck with your mind (Check out the video below). Many people don’t realize this but it isn’t singer Damian Kulash who is lip syncing in the music videos, it is actually bassist Tim Norwood. Norwood has always been better at lip syncing to choreographed moves so he has made the job his own. Fun Fact: The one song that Norwood actually does sing is called “C-C-C Cinnamon Lips” from their 2002 self-titled album.

I have had the chance to see OK Go a few times over the years but the most memorable was when I saw them open for The Might Be Giants in 2001. I had never heard them before but within the first song they had already won me over with their energetic stage presence.  I saw them again at a festival in 2002. The singer had just broken his foot and even though he couldn’t move around as much, they still put on a great show. OK Go will be making a stop at The Beacham this Wednesday, April 15, 2015 in support of their newest album, Hungry Ghosts (Win tickets below).

The video for “This Too Shall Pass” is one of my favorite OK Go videos.  It is all one shot and features the coolest “Rube Goldberg” machine that I ever seen. Check out the video below and I will see you at the show.

WIN TICKETS! OK Go at The Beacham on Wednesday night!"We can all agree that over the last 15 years OK Go has made some of the best videos ever." ;)ENTER HERE >>> http://showsigoto.com/ok-go-ticket-giveaway/

Get Tickets to OK Go In Orlando HERE!  (You can always give them to someone else if you win)