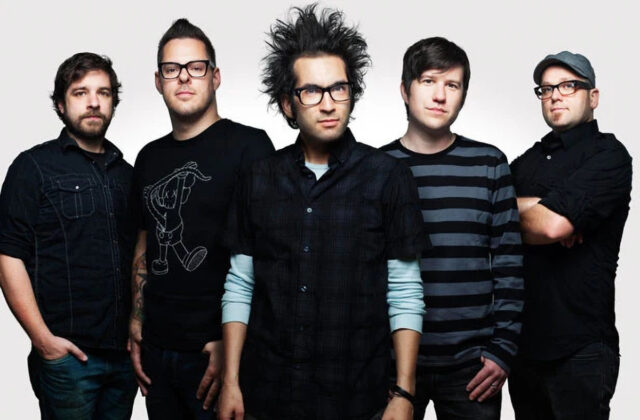 “Let’s get f*cked up and …” see one of the best pop punk bands of all time on their first tour together since the pandemic! Motion City Soundtrack is hitting the road and stopping by in Orlando at the House of Blues on June 27th, and Shows I Go To is your hookup for a chance to win free tickets! If this is your first time hearing about Motion City Sountrack, or even if you’ve seen them 10+ times like me, any moment spent with this band is just pure, absolute bliss. Special guests on the “17th Anniversary Tour of Commit This To Memory” include All Get Out, plus the comedy of Neil Rubenstein (TICKETS HERE)! Motion City Soundtrack has been killin’ it since they initially formed back in 1997 in Minneapolis. A full five piece band, they are led by founding members Justin Courtney Pierre and Joshua Cain, and are well known for their early 2000’s albums I Am the Movie (2003), Commit This To Memory (2005), Even If It Kills Me (2007), as well as appearing on many, many, MANY Warped Tours (10/25!!!), on top of maintaining a constant touring schedule and releasing a total of 6 studio albums. It was the constant grind, however, that caused them to announce a hiatus in 2016, breaking this writer’s heart. But, luckily for you and me, they got the band back together and we’re now talking about seeing them again!

One of my favorite things about Motion City Soundtrack is how much they really influenced the entire rock scene. They were able to really incorporate synth-pop into their very heavy and sadder lyrics, while always maintaining a level of humour and positivity that radiates throughout their entire discography. Which is nothing to say of how absolutely amazing their live shows are! I’ve been lucky to catch them every time they’ve toured since 2013, even flying out to Chicago to see them one last time before their hiatus back in 2016. One of my favorite friend couples even met each other at an MSC show, and now they have a beautiful child together. I definitely cried a bit when they did go on hiatus, because a major part of my life was leaving me, at the time, forever. Thankfully, they got back together in 2019 and I was able to see them once before the pandemic. As soon as I could, though, I was back in Chicago to see them again! (Riot Fest 2021) Needless to say, I’m very stoked that they’re getting back on the road and giving people like me the biggest serotonin boost ever!

If you’ve never listened to MSC, or it’s been a couple of years, how about a quick refresher of some of the hits they’ll be playing? Gotta start it off with everyone’s fav, “Everything Is Alright”:

Here’s their cover of one of my favourite Trampled By Turtles songs, “Wait So Long,” which I’m ever so happy that they made it their own:

Seriously! Do yourself a favor and go have an amazing evening, get a massive serotonin boost, and sing-a-long until your voice gives out. Motion City Soundtrack is just the kind of band we need in this year of some lord 2022. Block off your calendar, call a babysitter (or bring the kids! They’ll love it too!), and escape into the soundtrack. The House of Blues Orlando is your transport, and June 27th is the departure date (TICKETS HERE)!

We’ve teamed up with No Clubs & Live Nation FL to give you a chance to WIN (2) GA TICKETS to MOTION CITY SOUNDTRACK at House Of Blues in Orlando, FL on June 27!