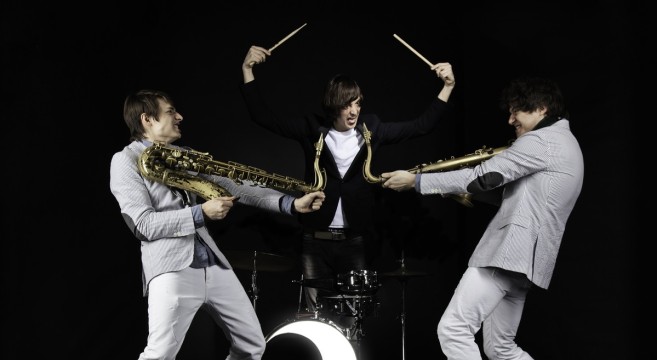 If you want a good cure for some Monday blues you may want to consider seeing Moon Hooch and the Groove Orient play at the Social on the 30th of March (win tickets below).

Are you familiar with them yet? I first discovered Moon Hooch when I saw them open for Lotus at the Beacham about two years ago. I didn’t know anything about them before going in except that their name was kind of fun to say. And, that I had noticed them on some music festival lineups, but man, their performance blew me away! I couldn’t believe how much energy they delivered as such an unconventional three piece band. I mean, it’s just a drummer and two saxophone players, right? But they sound HUGE! And trust me, you will want to dance!

If I could give you a mental image of their live performance and sound, it would involve Pink Panther(Godzilla-sized), ravaging a large city with some destructively jazzy groove stomps, with Darth Vader perched high on his shoulder at the reigns, barking commands while cackling maniacally. Yeah, that image is a little crazy, but so is Moon Hooch! It’s never certain what direction they are going to go next. I really love that quality when it comes to music.

I would say this is an accurate portrayal of how their groove can creep up and suck you in when you least expect it.

I actually cannot think of any other band that sounds like them right now. They have a unique way of fusing jazz, dance, breakbeat, and some aspects of big band jam. It’s all very experimental as far as I can tell and it’s kind of difficult for me to even classify so I will just leave it at that.

Listen to their first album and decide for yourself what their style/genre is:

This is a band you will want to see and know about if you are into awesomely unusual bands. I am certain they will not disappoint, especially since they are playing at the Social and will be up in your face with some serious brass.

We also mustn’t forget that the opener of the night, Groove Orient, is really killer too! These guys are an incredibly popular fixture in the Orlando scene these days and I would not hesitate to bet on their rise beyond local band status. If you didn’t already know about them, they will be one of your new favorites without a doubt. They were a knockout at the Social this past Tuesday (the 24th) when they opened for Turkuaz and I’m definitely looking forward to seeing them orient their grooves at Little Econ Love Fest in Lakeland over the weekend too.

Anyway, I hope you come out for this one. Don’t let those Monday blues get to you. Jazz ‘em up! See you there! 😉

Get Tickets to MOON HOOCH In Orlando HERE! (You can always give them to someone else if you win)