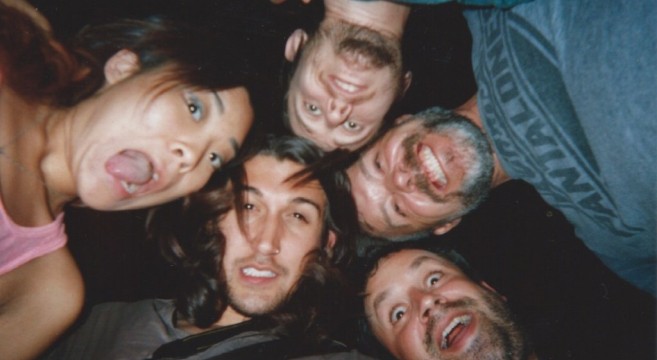 With only two pictures left on Marty’s disposable camera (yes, I said disposable camera), who and what were we going to take pictures of? Marty snapped a quick one of myself Dainon and a rando while we were at Lizzy’s, and Sarabeth took a picture with Jake (Jake Snider, lead vocalist and guitarist of Minus The Bear).

I’ve been a Minus The Bear fan since 2006. Actually, one of my friends from back home introduced me to them. This was during some of my recovery time after the accident (see my Taking Back Sunday live review for more of that back story). Dance party and nostalgia are the words that come to mind when I hear Minus The Bear. When I found out about their tour, I jumped on the opportunity immediately. What was even more exciting about their Orlando show was that it was at The Social. Yay for small venues!!!! Marty jumped on the Minus The Bear dance party wagon as well. A couple days leading up to the show, I had come to find out that Sean, Dainon, Gabe, and Sarabeth would also be in attendance. I love it when we all decide to go to shows. It always turns into a fun night.

I met Marty at Lizzy’s before the show. The Social is across the street from Lizzy’s, so it was easy to see the length of the line. We shot the shit for a little while he kicked back a beer. I saw that Sean had arrived, so I decided to get in line with him. Martin joined us shortly after. Once we got in, Martin started creepin’. Ok, more like doing test shots and seeing what angles he was going to be working with. 😉 Marty pulled out a silver package … a Kodak disposable camera. Umm WHAT?! Talk about old school.

He then explained that it was an impulse buy/another way to document the night. I was so excited about the camera. He gave me the responsibility to take pictures with it … anyway, the venue wasn’t packed yet, but Sean and I knew it was coming since it was a SOLD OUT show. We all had heard that Into It. Over It. is something to talk about, so we were more than interested to see them open. We weren’t too familiar with their music, but once they started playing we were definitely feeling them. Marty was starting to run around, shooting Into It. Over It. the venue was slowly filling up, and the crowd was also really getting into the music. They were really getting Into It…Ha. Into It. Over It. was definitely a great choice for opening. What a nice warm up to Minus The Bear.

During the set change, it was announced that one of MTB’s mics was missing. The mic was needed or the show was not going to go on. It was said that someone had taken the mic … who would do that? Finally, the mic was found/returned. The place was packed. Somehow Sean made his way into the pit (like always). He was up front. Usually he’s stage right, but this time he was stage left.

As the band took the stage, the place was going crazy in excitement! The guys opened with “Fine + 2 Pts.” What a way to start the set! Seriously though, the entire set was dance-tastic! “My Time,” “The Fix,” “Absinthe Party at the Fly Honey Warehouse,” and of course ending the night with “Knights” worked me up a sweat. Marty and I did some dancing … where he completely slipped off the ledge of where the soundboard is. The crowd was 1000% singing and dancing along. It was quite the moving. 😉 “Knights” was the right choice to end the show with.

Afterwards (and after Sean and Marty took surprise pictures with the disposable), we went back to Lizzy’s for a few drinks. More random pictures happened, stories were told, Dainon trying to figure out how to turn on the flash on his phone, and Minus The Bear came and hung out at Lizzy’s! Sarabeth did get a picture with Jake and bassist, Cory Murchy. The guys said I should get a picture with them. I was all nonchalant about the idea. Yes, it would’ve been cool and fitting since I’m writing the review, but at the same time, I didn’t want to intrude on their downtime before heading to St. Pete. If we had still been in the venue, then yeah, I would’ve done it for sure.

Overall, the night was GREAT! All of us were either seeing them for the first time, or hadn’t seen them in a VERY long time. Everyone on staff was blown away. I didn’t expect anything less from them. The show brought me back to late night rides with my close friends and dancing in our cars. Nostalgia was my real theme for the night.