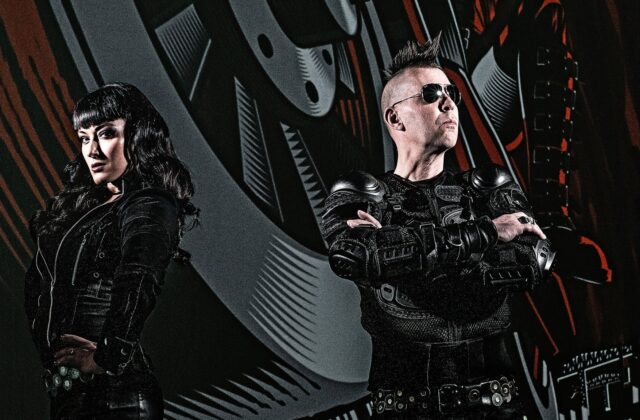 Multinational industrial metal band KMFDM, is coming to the Sunshine State! See them on Thursday, September 29th at the Orlando Hard Rock in CityWalk Universal! The group is on the road to spread the word of their new album HYËNA, so make a beeline to get some tickets, (or enter our giveaway at the end of the bottom of the screen) because you will not want to miss a live KMFDM show! Special guests Chant and MC Ocelot provide opening support. GET TICKETS HERE! KMFDM (originally known as Kein Mehrheit Für Die Mitleid, loosely translated as “no pity for the majority”), is an electro-industrial metal band originally formed in Hamburg, Germany in 1984. Led by current vocalist and cornerstone member Sascha Konietzko, it first began as a performance art project. Today, the current members are Konietzko himself, Lucia Cifarelli on vocals/keyboards, Andy Selway on drums, and Andee Blacksugar on guitars.

As spoken by their album cover artist Aidan ‘Brute!’ Hughes, “KMFDM have cornered the market in industrial post-modern angst…” Along with bands such as Nine Inch Nails and Skinny Puppy, KMFDM has been noted as bringing the style of industrial metal to the mainstream. Although, Konietzko would rather label the band in a phrase of his own creation, “The Ultra-Heavy Beat.” Their music involves loops of some of the heaviest guitar riffs you’ve ever heard, combined with that pure gold synthetic percussion beat all industrial metal heads have come to know and love.

Although the group has seen many changes in membership, each iteration proves names may change but the quality never sways. KMFDM will leave you thunderstruck in a flurry of hard hitting industrial waves as they prove just how much they rock. Do NOT miss your chance to see the co-founders of the industrial metal genre: KMFDM! GET TICKETS HERE!