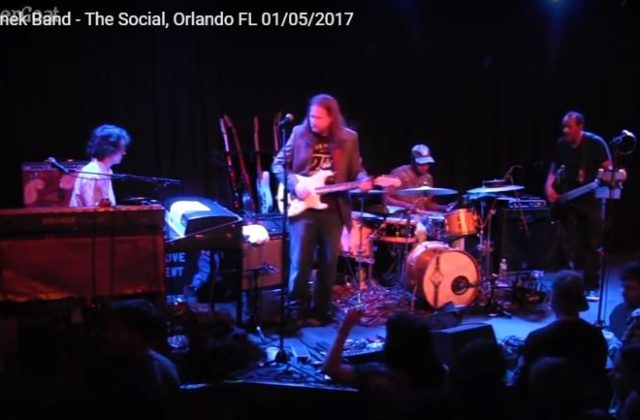 Joe who? Joe mutha luvin’ Marcinek. That’s who. If you didn’t know his name before, you do now. I’ll be honest, I didn’t know his name until this show. I saw the show announcement for the Joe Marcinek Band and knew all of the members in his band… Tony Hall on bass (Dumpstaphunk, Dave Mathews & Friends), Shaun Martin on keys (Snarky Puppy, Kirk Franklin) and Alvin Ford Jr on drums (Pretty Lights)… but for some reason I had never heard of the guy who the band was named after. How did this happen? I have no idea, but I was going to the show.

And to make things better, my boys in The Groove Orient were opening up to kick things off. They did a nice job warming up the crowd and getting everyone in the dancing mood. Chuck encouraged us Orlandoians to have fun and acknowledged the party people up front in the pit, that’s what he likes to see. Their heavy groove blues rock was just the thing to start the night off. With a setlist that included killer versions of original tunes such as “Banans,” “Bugs” and “Hot Bandit Woman,” this band has become quite the spectacle. The Groove Orient is Harry Ong on lead vocals/bass, Tommy Shugart on Hammond organ/electric piano, Chuck Magid on electric/acoustic guitar/vocals, David Vanegas on percussion/bass/vocals, and Aaron “Bucky” Buckingham on drums.

Watch the full set video, thanks to The Sober Goat!

Due to a delayed flight with American Airlines (Tony Hall says don’t fly with them, fly Southwest!), Shaun Martin was unable to make it to the show. Lucky for us, Orlando’s very own Tommy Shugart of The Groove Orient said he was up to the task of filling in. It was like he was already in the band, but he had never met Joe before. He made magic happen and did an amazing job… or as Tony Hall said, “He killed it!” The first half of the set had a nice build up of jams that included “Slink” from the new album Slink, and also a very happy “Quinn the Eskimo” (Bob Dylan). Halfway through the set, Joe called up Chuck Magid of The Groove Orient to lay down some solid guitar licks on a not so shaky “Shakedown Street” (Grateful Dead) which completely turned the place into a house party festival. Then another local legend in the making, Savi Fernandez, waltzed up on stage and played with the band for the remaining 25 minutes of the show. The last song “If You Want Me To Stay” had so much love tucked into it that I didn’t want to leave, I wanted them to stay. However, it was closing time. We didn’t have to go home, but we couldn’t stay there. Oh, and the one and only Roosevelt Collier (The Lee Boys) was in the building, but only as an audience member… so unfortunately we did not get a steel pedal guitar schoolin’ sit in from The Doctor.

Watch the full set video, thanks to The Sober Goat!