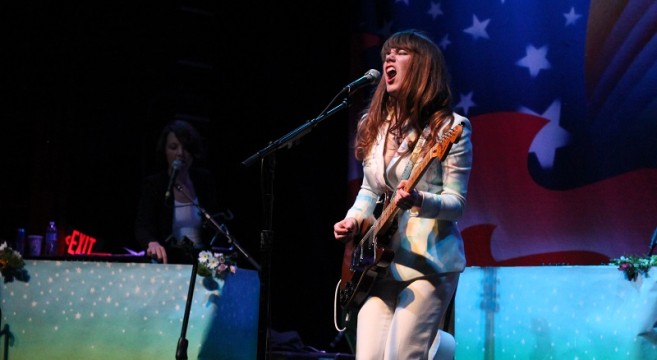 Here’s what I really want to say, right out of the gate and before the rest of these other words get in the way: Jenny Lewis is one hell of a seasoned pro.

She is confident and brilliant and an absolute pleasure to see perform. That’s putting things lightly, too. It doesn’t matter if she’s singing her Rilo Kiley goodies or sharing brand new songs (“Girl on Girl”) or showing off her solo work. They stand up, all of them. I don’t differentiate; I’m a fan of her in all her many musical forms. She writes and sings so well—she’s so blessedly consistent—there’s never been a reason to.

She strutted around stage with one hand in her pocket (the “this stuff is just so easy” approach), played her share of guitars plenty and, when she wanted to—and she wanted to a lot—she’d climb up on a platform so we could see her and she could hear us screaming and cheering a lot better. That act alone managed to magnify her regality some: she was our queen of the evening. It made for a slick, polished performance. She showed off just how good she continues to get, the more she shows she plays, the further she eases into a comfortable career.

Here’s the thing I don’t always get about Lewis: she seems to have far more female fans than she does males. Dispute the observation if you wish. But to know one of her female adorers is to know a girl or woman who openly idolizes her and wants to be like her, someone who’ll admit to switching teams if she was so asked. I’ve seen it over and over again. There’s nothing wrong with that, of course, but perhaps there ought to be more of us guys doing the idolizing, ranting and raving. Not because she’s beautiful (that’s a given) but because she’s the caliber of musician that she is.

My undying wish never got granted, but it’s no fault of hers, not really: I wanted Ryan Adams to show up unexpectedly. The two have been real chummy of late, singing and playing together all over the place. He’d played a couple days previously over in Miami and she’d guested on “Oh My Sweet Carolina.” I was not so secretly hoping he’d repay the favor at The Beacham. No dice.

As far as Sunday nights go, too, the timing of this one was fairly perfect. It’s not every day a show closes up shop by 9:30. I’d like to see that happen more. Thanks for giving us all we expected to get, Jenny Lewis, and thanks for allowing us to end our Sunday Funday at a pretty reasonable hour. It made Monday go down a little easier.