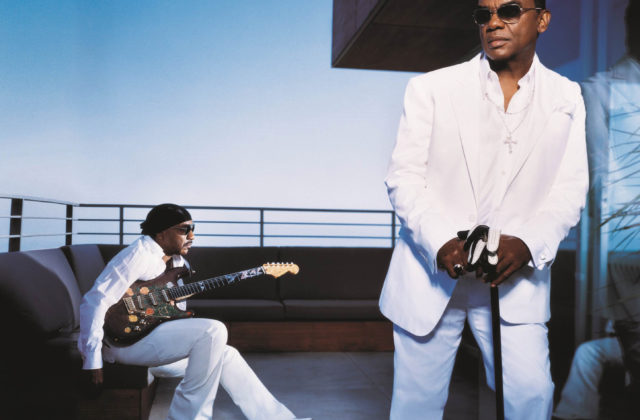 A quick trip to St. Petersburg Florida is nothing when its for the five time Grammy Awards winning Isley Brothers.  They are a gigantic and influential R&B band that also dabbles in soul and gospel in its later years.   We arrive almost on time for this epic event.  This duo which used to be strictly a family affair is touring for their 60th anniversary!!  They wrote “Shout” in 1959!!  We race over through thicc I4 traffic and arrive to the venue Mahaffey Theater in St. Pete., just before the show starts.  Pulling in to the venue, we can tell it is a nice place because it shares a parking lot with the Salvador Dahli Museum.  The place has lots of room in the lobby, as well as a medium sized theater with traditional seats and everyone in attendance is dressed up.  One lady is decked out head to toe in red.  Her red feather hat and dress matched perfectly the red outfit that was worn by Ronald Isley on stage tonight.  I pulled her a side after the show to ask where she got her inside information and she said she had no idea that red was the color of the evening.  We sit down in our seats and make friends like the rest of the crowd while we wait for the show to begin.

The lights dim while the crowd turns up as the Isley Brothers & Co walk on stage.  There are flowers in a vase just in front of the drummer as well as a stool shaped like a pair of red lips.  The band consists of a drummer and percussionist as well as two keys players, a bassist and brothers Ronald & Ernie Isley on vocals and screamin’ electric guitar.  In addition, there are two female back up singers, also dressed in red, who turn out to be Ronald’s sister in law and his wife.  Holy shit can these two sing.  Combine them with a male back up singer in the back and the full band is ready to rock some of the biggest hits my ears have ever heard. “Fight the Power” is the opening song.  They all sing together as three dancers join them on stage to give life to the music.  Ernie Isley has a long guitar solo outro that turns into the sexy beginning of “That Lady.”  He’s still got it.  Ernie’s playing was sharp, organized, and even had teeth in some places.  Ronald takes a moment after the slow and sexy song to talk about his next big hit, “Between the Sheets.”  It was awesome to see them nod to the new school by rapping the chorus to “Big Poppa,” the song by Notorious B.I.G. that samples theirs hit single.  Then the crowd really gets into it for the remainder of that tune and especially for the next one, “Footsteps in the Dark.”  This song has been sampled one way or another by 77 different artists.  “It was a Good Day,” Ice Cube; “One Day You’ll Be Mine,” Usher; and even Thundercat samples the drum portion for his hit, “Them Changes!”

Next they slow it down with the sexy “Smooth Sailin’ Tonight.”  In the middle of the song, Ronald notices a woman in the front rows who is singing her heart out.  He compliments her singing and asks the back up singers to lend their microphone so that she can share her talent with the whole room.  So now she is beet red, holding the mic gingly was being super shy.  The crowd starts to hit her with vocal affirmations, “You can do it hunny!”  “Sing it, girl!”  “You got this!”  People shout all around me while the band sits in the pocket ready for her to pick up at the next chorus.  She dominates the next few moments with her pipping hot vocals!  Hot damn!  The crowd lets her have it and she returns to her seat with a look of pride.  Ronald sticks around complimenting her until he says, “Oh, is that your husband? Yes?  Whoops!”

Next, they transport us back to 1969 for “It’s Your Thing.”  This funk song has the crowd dancin’ and movin’.  “Shout Part 1” is after that.  The ladies scream and sing along all around me.  From here they move stools to the front of the stage and Ronald along with the female back up singers run through a medley of songs from back in the day.  They cover or tease “Don’t Say Goodnight,” Sam Cooke’s “What a Wonderful World,” Credence Clearwater Revival’s “Proud Mary,” and Earth Wind and Fire’s “Devotion.”  They move back into originals with the couples tune, “For the Love of You.”  All three of these people can fawkin’ sang.  Like big voices that can fill the room with ease!  His wife Kandy Johnson Isley takes the reigns and performs the biggest “Jesus Love Me” I have ever heard (I worked in the church for 5 years) as well as a nod to Diana Ross with her song “Reach Out and Touch (Somebody’s Hand).”

Rounding out the set, they complete their song “Voyage to Atlantis” which is a little on the slow side but I notice that the rapper Pastor Troy has sampled this song for his hit track, “Atlanta.”

The dancers return to the stage to close out the set.  They add to the mix during “Summer Breeze.”  Here, Ernie shreds things softly with his sensual but sharp tones on guitar.  They jam their way over to “Shout Part 2” and the grand finale of the evening.  What a show!  We loved the venue and the music!  Oh, and… I was lucky enough to get a backstage pass and got to meet the brothers as well as have our profesh photo together! Schwing!  What a great night!