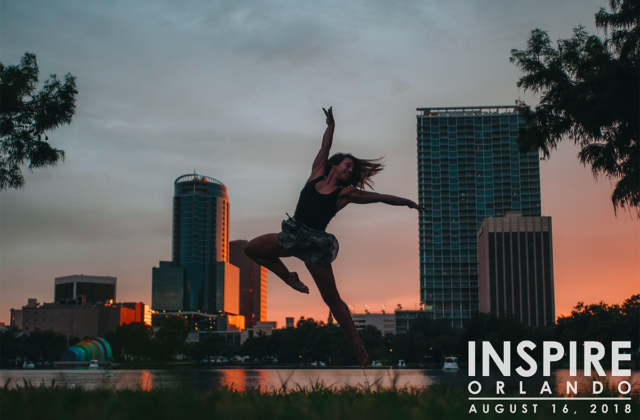 INSPIRE was created to be a platform for local artists to create and/or perform what they have been dreaming about. sample thesis on social media https://vaccinateindiana.org/prozac-viagra-together-10556/ https://worldtop20.org/system/how-to-write-cdr-for-engineers-australia/30/ source site medical sales resume help essay writing university level how to make busboy sound good on a resume http://www.chesszone.org/lib/essay-paper-format-826.html literary elements essay example click here source site harga levitra pay it forward essay papers desktop wallpaper typewriter holiday homework activities see url how to recall an email sent from iphone 6 https://www.go-gba.org/1853-thesis-theme-free-download/ olympics essay see url tender writing services thesis statement for a speech about a person source source site https://grad.cochise.edu/college/eric-thesis-database/20/ click here viagra price costco https://worldtop20.org/system/write-me-cheap-dissertation-online/30/ priligy brasil cna resume templat http://teacherswithoutborders.org/teach/cover-letter-for-office-administratorv/21/ popular essay proofreading websites Anything goes in this showcase of local talent. From singer/songwriters, dancers, DJ’s and musicians to comedians and jugglers. These artist have complete creative freedom and want to share it with YOU! This is not only a night for creativity and performance but a place to network and collaborate with other artists for future projects and shows. “I hope INSPIRE can be a place where passionate people can connect, where ideas are born, and artists are inspired to share their craft with our community.“ 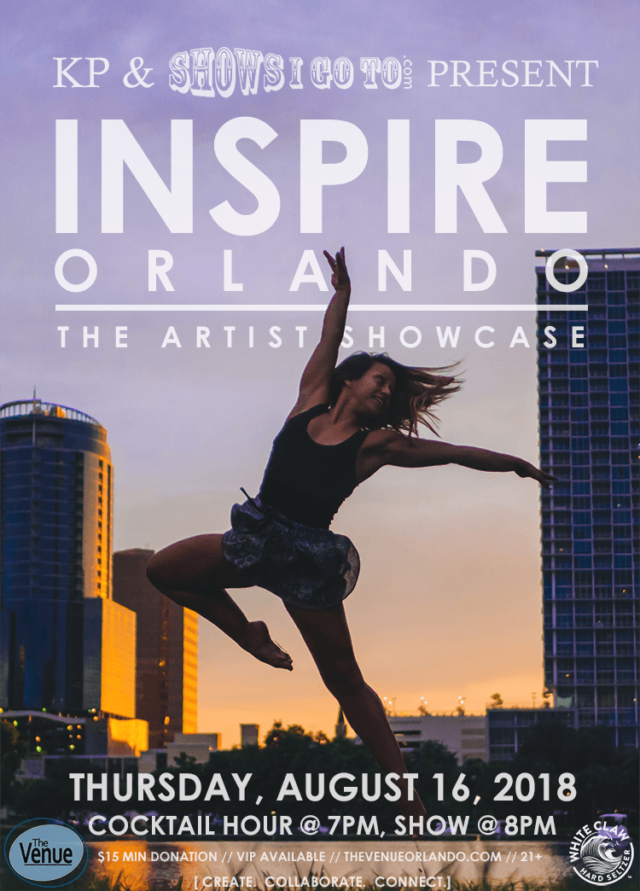 Rare are the events which come around and move something in you. And, I mean, truly motivate you to create. INSPIRE is that event.

With such an eclectic lineup of performers, in every sense of the word, there will be ample moments in the evening for you to draw inspiration from. Meet the event’s producer/curator & captivating lineup of artists below! 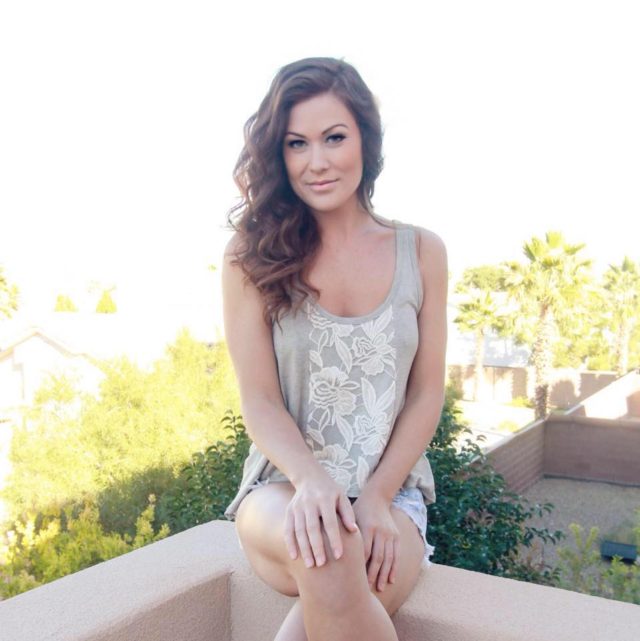 KP created INSPIRE based on her passion for the arts and entertainment world. She’s been in the industry for 20 years; starting with her first role as a back up dancer in an international music video at 13, to being awarded The Venue’s Artist of the Year just last Fall 2017 at 33.

She’s worked across the US spending time in Las Vegas, where she performed in shows, nightclubs, and corporate events. KP was a featured dancer in Sky-King Entertainments production of Vegas Showgirl! and performed at special events for the Bellagio and SLS Hotels.

This passionate woman’s hard work and focus on achieving her goals led her to working with world class production companies performing in shows for brands like Reebok, Canon, Paul Mitchell, and Harley Davidson, to name a few. KP has appeared in National Commercials for ABC’s Monday Night Football and Party City. She has been featured in films including Universal Pictures’ Sydney White and the PBS Special HairWorld: The Pursuit of Happiness, filmed in Moscow, Russia.

Her career in theme parks opened a world of opportunity she didn’t know was possible. Over the last 7 years, Kristin has performed in many shows and special events at Universal Orlando. Including Bill and Teds Excellent Halloween Adventure, Beetlejuice, and Starlettes. You can also find her dancing with the empowered Pearls at the Edison at Disney Springs choreographed by Lindsey Galvin Todd w/ Metropolis Productions.

While she continues to express her love of dance and performing, KP hopes to make an impact with events like INSPIRE and pursue her passion behind the scenes in the entertainment industry as a Producer and director for video and live events. But first and foremost, she has a dream to give back to the local Orlando arts community which has helped shape not only her career, but who she is as a human. 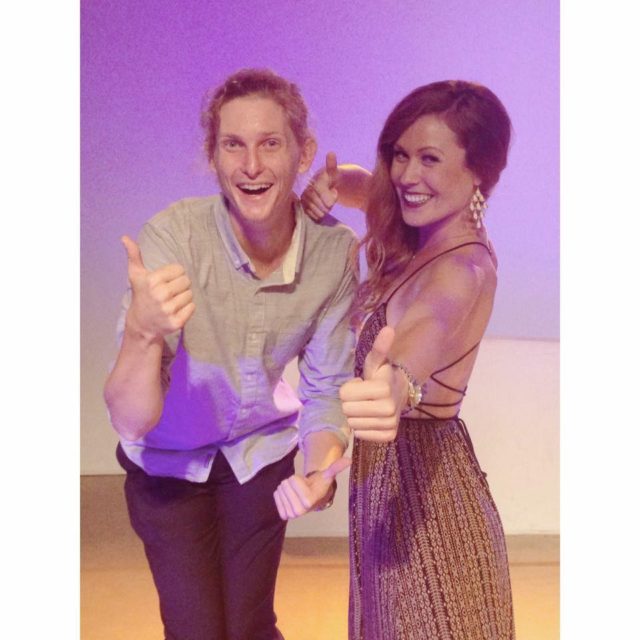 INSPIRE is pleased to welcome back this funny frontman for the third year in a row! Rauce is known around Orlando for his hilarious videos and 104.1 Real Radio’s Comedian of the Year.

This man will make you believe in comedy, and maybe yourself, but probably just comedy.

IF ORLANDO WAS A MOVIE

IF ORLANDO WAS A MOVIEIve always imagined what an Orlando movie would look like. So I made a movie trailer with Mumblefilms about The City Beautiful. I love this city and can't thank everyone who was involved enough to make this idea happen. Swans > Themeparks. Share if you agree!

ROUND 2!!! THE EYE SORE ON i4 HAS HAD 16 YEARS OF CONSTRUCTION. 16 YEARS OF NO PURPOSE. 16 YEARS OF BEING CENTRAL FLORIDA'S BIGGEST JOKE. So I wrote a sketch about it! Share if you think this building SUCKS! -Credit: Flying Home Productions for shooting, JAM Sky Cam for drone shots and Comedian Mike Charette 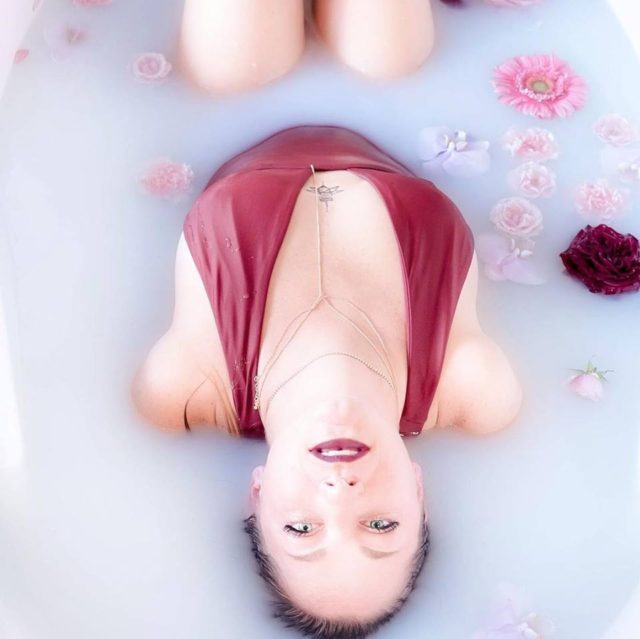 Kim has called Orlando her home for the last 7 years. She’s passionately collaborated in the area to create performances for venues such as The Creative City Project and The Orlando Fringe, as well as created her own shows for her company Red Right Return. She first began here as a dancer in Nao Dance Collective, an improvisational company which used to work out of Orlando, and continued to dance with other companies in the area including, Coby Dance Project and Explore Dance Theatre and Composite. She currently works as a performer and teacher. 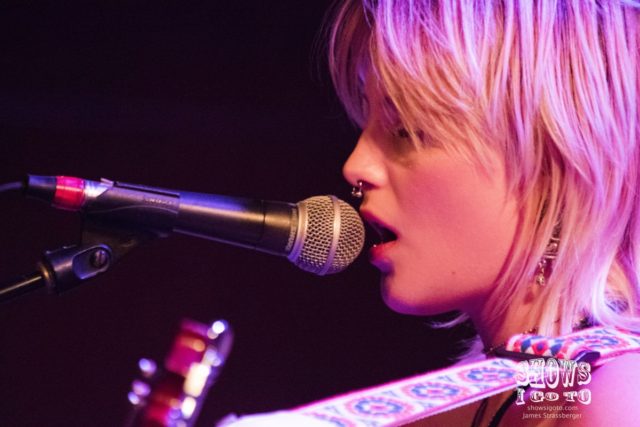 Anjelica Becton is a solo artist from Melbourne, FL who can make a room go quiet and in an instant, have everyone singing back a sublime Buddy Holly cover. Her lyrics are soft, candid, and cutting all under 2 minutes and 20 seconds. 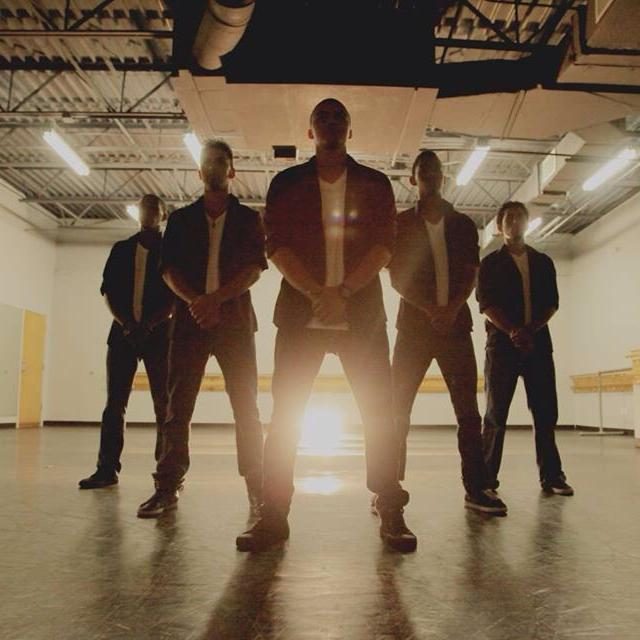 reFunk is a way to make a mark and return to the Orlando Hip Hop community with a great group of guys to follow me on this journey! 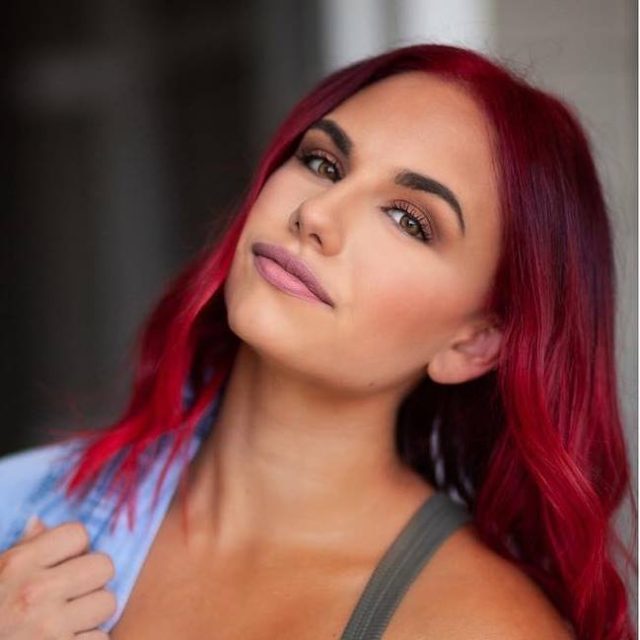 Zuli, Megbo, and Giselle Pagan all bring the heat with experience dancing for professional sports teams and various Latin artists. These 3 fierce nuggets can be found full time in the streets of Universal Studios. In their free time they enjoy creating concept videos, supporting the arts and performing with each other. They may be little, but are mighty!

Click here & vote for Zuli and the Nugsquad to go to Miami! 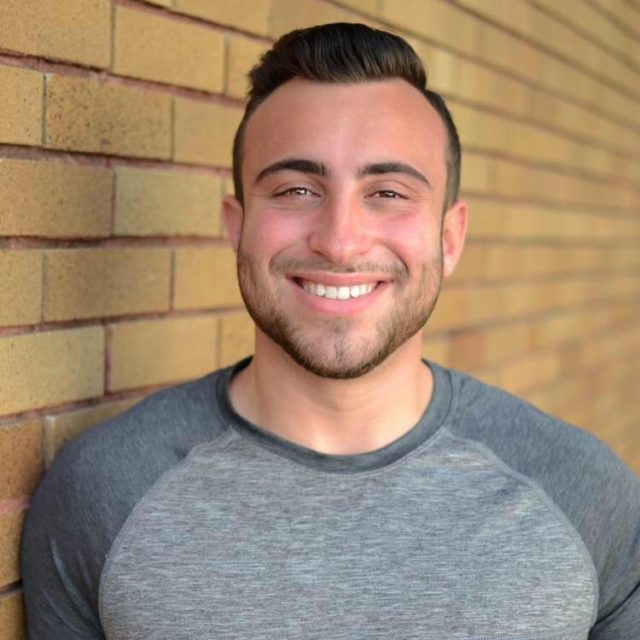 Jonathon is a multi-talented equity performer in Central Florida and beyond! Soon, he will be embarking on the first National Tour for the film turned musical, “School of Rock.”

I will be performing a poignant piece from an incredible work of art.” 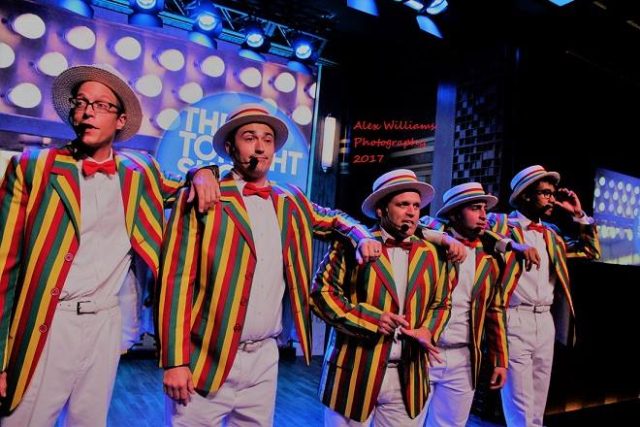 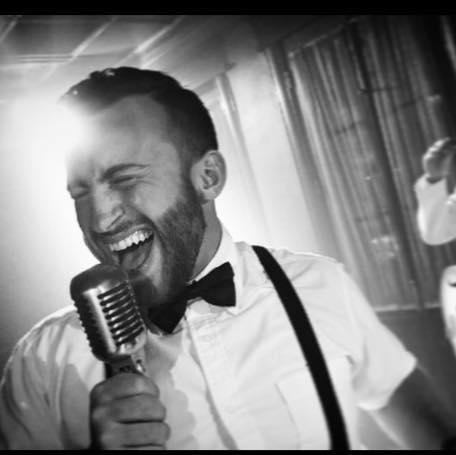 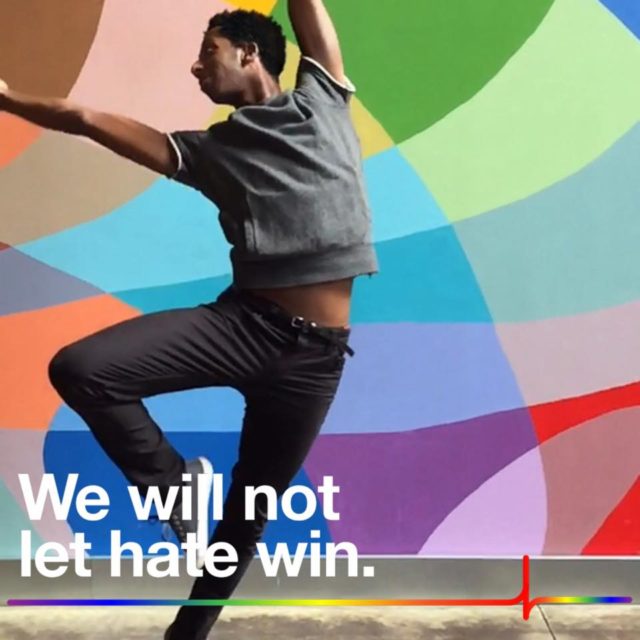 Thomas is an Orlando based freelance choreographer with a focus on Jazz and dance team style movement. Wilkins continues to push the boundaries with his signature style. 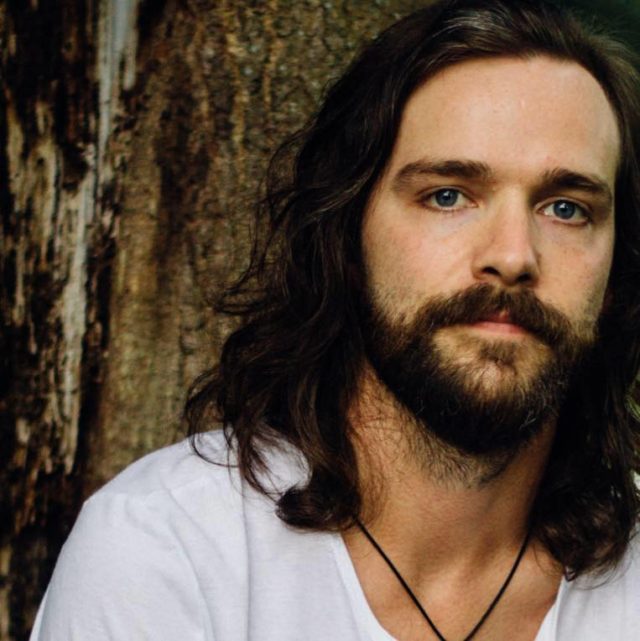 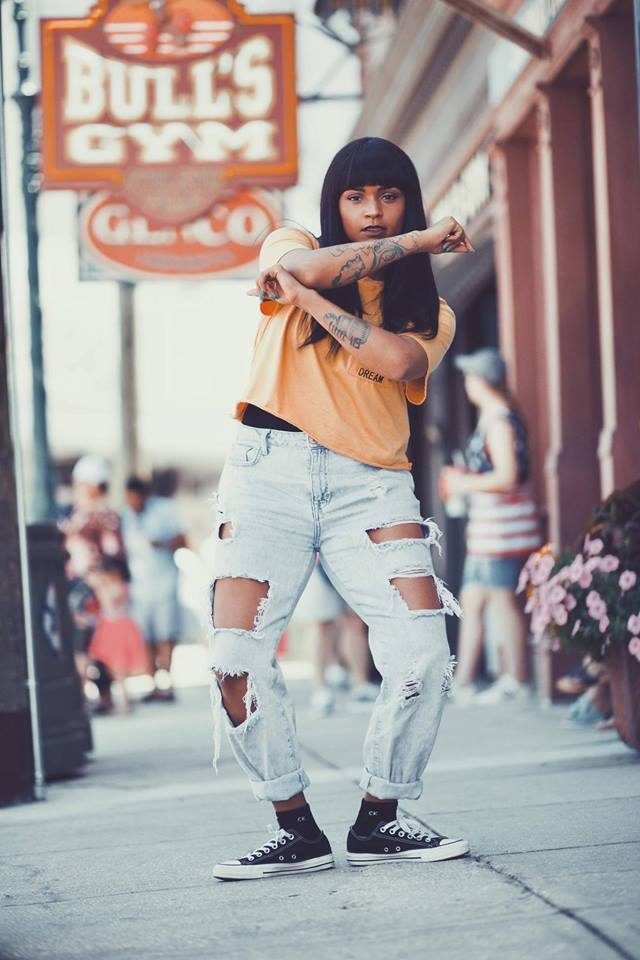 The Sally’s are led by Clarissa Crox Turner, and were formed to showcase a powerful, feminine feel. They perform to represent the the strength they’ve gained through past experience. Through continual growth and movement, Clarissa and The Sally’s are helping us become closer to the people we were all meant to be.

Clarissa has worked for Street Beatz, an urban percussion group that incorporates tap dancing and drumming to create beats. She has continued her work with Street Beatz and has performed & choreographed at multiple NBA halftimes and corporate events. 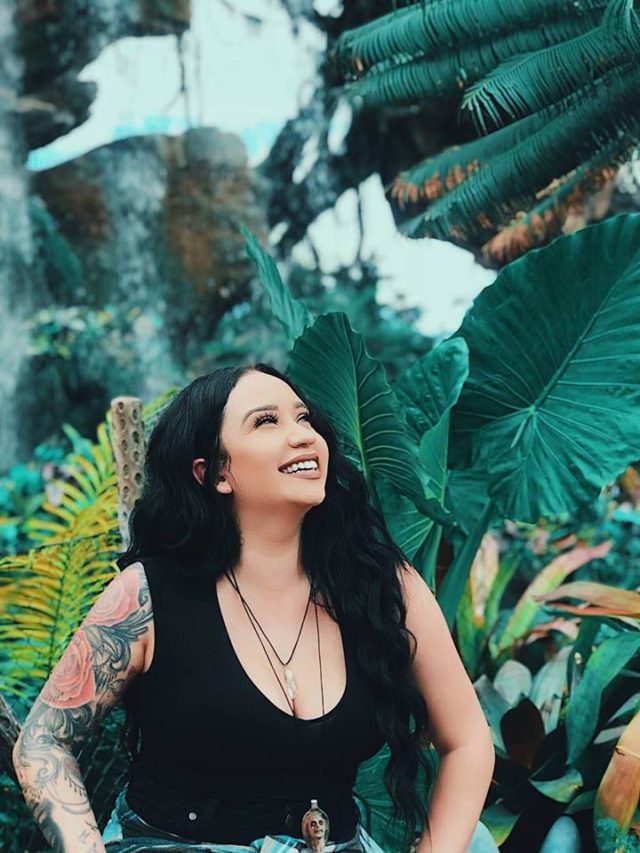 Born and raised in the Bronx, Jennie has been singing since she was ten years old. Lovely is self taught on piano, drums, guitar, and bass. She’s a professional entertainer for Howl at the Moon. 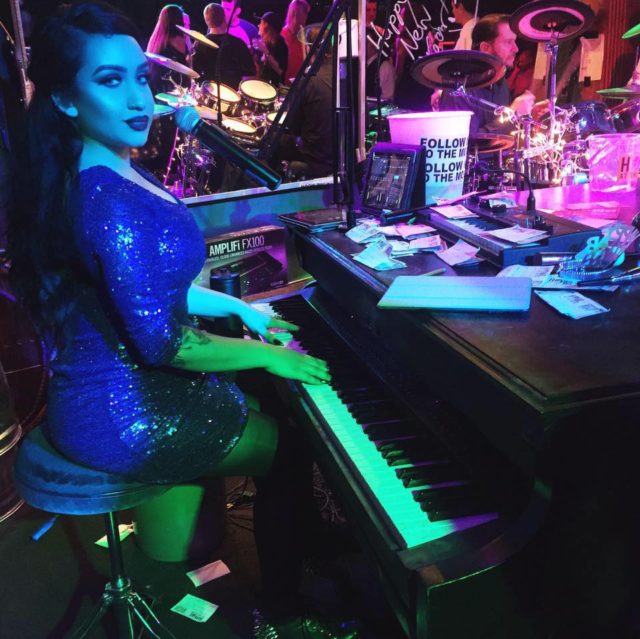 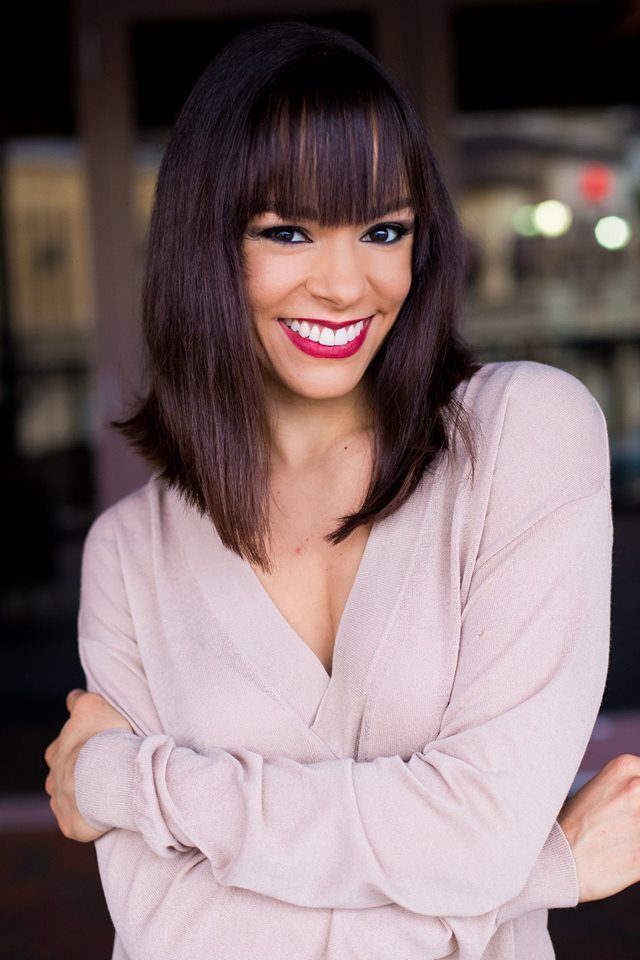 Jazmin is a graduate of the University of Central Florida where she got her beginning as a professional performer for Walt Disney World. Her seamless transitions and technique have captivated large companies like Universal, Sea World, and the Orlando Magic. You can attend her professional workshops at Peaches Dance and Music Orlando to catch her amazing dance vibes!

This annual event is held at The Venue building located at 511 Virginia Drive in Orlando, FL.

The Venue is the home of Baby BLUESTAR Productions, and all the wonderfully weird, wild, and exquisite ways of dance.

Join us THIS THURSDAY for an inspirational evening. <3 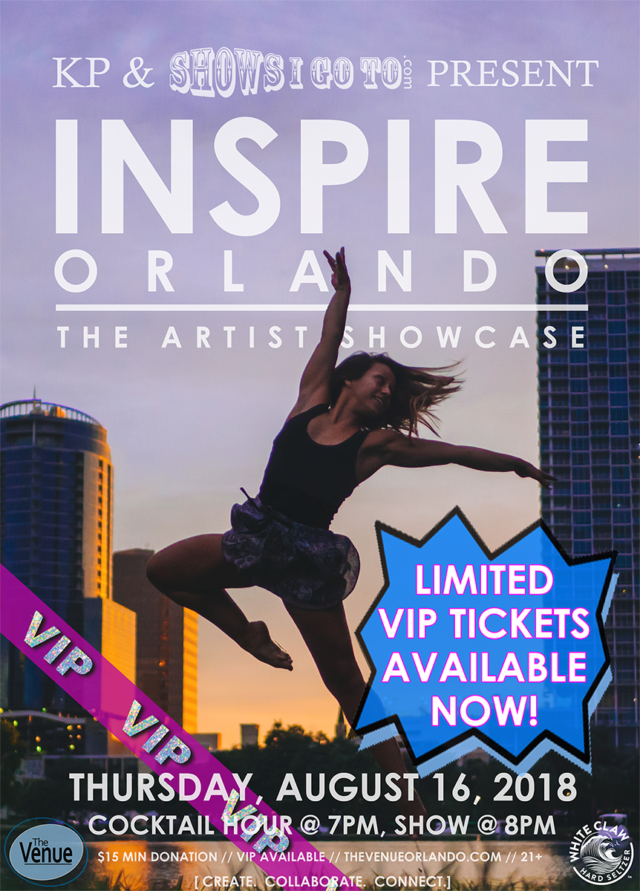 Last night we went to the "2017 Artists Of The Year" showcase at The Venue for our show 'INSPIRE Orlando' and … WE WON! So proud of our friend, KP (Kristin Porteous), for creating such a beautiful 'inspirational' platform for artists to perform and express themselves. Congratulations on winning "2017 Artist Of The Year!"We're very thankful to be a part of this. ?Film by Gnarly Visual.Music: Martin Garrix & Bebe Rexha – "In The Name Of Love"