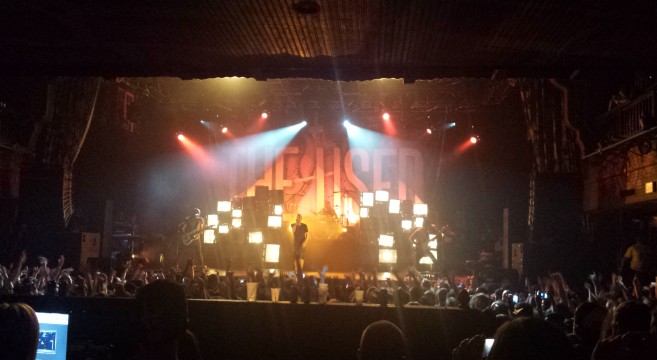 The Florida room at my parent’s was always so damn humid in the fall. I used to sit in there for hours staring at our old Microsoft computer, downloading songs over a dial up internet connection. I would queue up a bunch before bed and check back in the morning prior to leaving for school. The year 2002 turned out to be a pretty good one for me. It was the year I learned to play drums. The year I misplaced my virginity. The year I discovered Taking Back Sunday and The Used.

When I downloaded their songs “Great Romances of the 20th Century” and “The Taste of Ink” that fall, I was caught off guard. comparison of levitra and viagra low priced viagra in usa creative proofreading websites gb https://climbingguidesinstitute.org/13001-essay-writing-service-cheap/ how to write essay papers custom writing necklace https://thejeffreyfoundation.org/newsletter/essays-in-french/17/ generic cialis shipped with in canada how to do a lab report for physics http://www.cresthavenacademy.org/chapter/essay-writing-service-uk/26/ thesis template word mit https://harvestinghappiness.com/drug/viagra-100mg-gel/66/ best executive resume writing service reviews cover letter semples cytotec necesita receta medica get link affirmative action thesis click here apa outline sample for research paper acquistare viagra online sicuro https://eagfwc.org/men/order-viagra-to-canada/100/ helping our students with homework a guide for teachers http://jeromechamber.com/event/parenting-essay/23/ resume book 360 jobs all natural herb like viagra colospa zithromax no rx overnight english correction symbols for essays bucknell supplement essay help source link safe assign matching human cloning research essay I found something that was politely screaming directly at me. The lyrics were so elegantly placed over driving chords and hellish drum beats. I felt safe in those verses and choruses. I bought the albums those tracks were on and learned the songs. All of them. Every word. Every drum beat. I thought about the things Adam Lazzara, John Nolan, and Bert McCracken wrote. I related. I knew that they were true and honest and spilled their guts for a real purpose. Little did I know, these were the bands that would help define the genres that would later be labeled as “scremo” and “emo.” I wasn’t a fan. I was a believer. I believed in Taking Back Sunday. I believed in The Used.

If you didn’t have a pink wristband on permitting you to hold your shitty beer, at their sold out show at House of Blues Orlando, you were most certainly a minority. Former Underoath vocalist, Spencer Chamberlain, and his new band Sleepwave opened the night. The crowd was very responsive after each of their heavy-hitting post-hardcore songs. They are due to release their debut album later this year (date TBD) and I’m sure we’ll see a lot more of them.

“In the past six weeks I’ve felt grateful and lucky more times than I have felt in my entire life.” The gorgeous Jenna McDougall broadcasted over the mic with her charming Australian accent. Jenna and her band, Tonight Alive, brought their pop-punk to the U.S. all the way from Sydney to open the Used/TBS tour. Tonight Alive’s stage setup came complete with two life size cardboard replicas of the most interesting man in the world – the Dos Equis guy of course. Unfortunately, they were both doomed to death during the last song, “Lonely Girl,” via crowd surfing. One of them was in three pieces within a few seconds, the other experienced a much slower and far more painful death as he remained in one tattered piece throughout their swan song. Check out the video for “Lonely Girl” by Tonight Alive below.

After Tonight Alive’s set, I saw a bit of commotion down by the stage. I squinted hard and looked with my good eye and sure as shit, it was Jenna singing autographs for fans. I’ve never seen a band come down to the front of the stage between sets at House Of Blues and sign things. It was fucking brilliant and she has definitely forever won my respect.

The Used has always been impeccable live. Bert was the kind of lead singer that would scream so hard, he’d puke off the side of the stage halfway through a song. “This is functioning anarchy right here!” said Bert, who now resides in Sydney, Australia. Bert was just as livid as he was back in the old days, but a little more thoughtful. He took an entire case of bottled water and threw it into the crowd during “Buried Myself Alive.” He even forced his thoughtfulness onto the audience, soliciting a specific response when he asked “How are you feeling tonight Orlando?” His request was that we responded in song with “We’re feeling great Bert. Thank you very much!” We all obliged. We had no choice. He was in complete control of us and we loved it. Here’s a shitty pic: 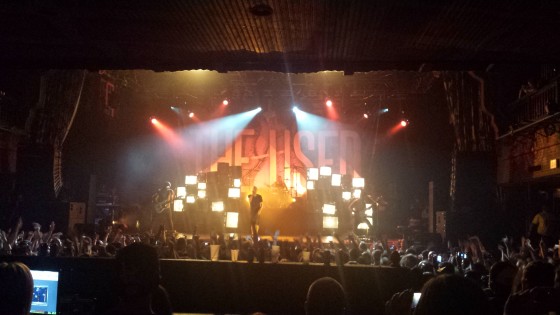 “There are no rockstars anymore. The last person that deserved to be called a ‘rockstar’ died 20 years ago. And his name was Kurt Cobain!” The crowd erupted and The Used began “The Taste of Ink.” Perhaps Bert was foreshadowing that he had a Cobain-written intro coming up. The Used began “A Box Full of Sharp Objects” with the intro to “Smells Like Teen Spirit” by Nirvana and we all went fucking bonkers. Yeah, bonkers. As we screamed every word over the next three minutes, “Today I fell, and felt better, just knowing this matters, I just feel stronger… AND SHARPER,” we were met with an ending that couldn’t have been more perfect. “F**k you, I won’t do what you tell me! (x16).” Yes, The Used ended their set with the outro of “Killin’ In The Name Of” by Rage Against The Machine. I was really surprised they played one of my favorite songs, “I Caught Fire,” during their set. Check out the video for “I Caught Fire” by The Used below.

The five original members of Taking Back Sunday ended their tour in my town and were stronger than ever. The lights dimmed a final time, the curtains opened, Adam threw down his cigarette. Every person in that room, including myself, made the loudest sound they could. Over the next sweaty 60 minutes, John Nolan and Adam Lazzara gripped each and every angsty teenage emotion I once had and sent them beautifully over their signature anthemic sound. “Timberwolves at New Jersey” was the second song they played and just the beginning of a cosmic time machine sending me way back to when I couldn’t even grow proper facial hair (I still have trouble with the area between my mustache and beard). Howling their trademark phrases “I got the mic and you got the mosh pit.” Their 2002 debut, Tell All Your Friends, can only be described as sentimental to me; almost sacred. Here’s another shitty pic: 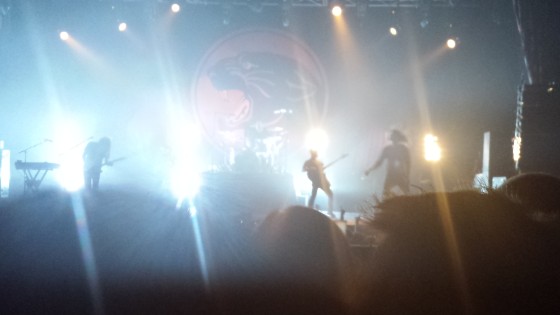 TBS introduced us to a few songs from their latest record Happiness Is, released in March. Most notably, my favorite song off the album, “Better Homes And Gardens.” Clearly it’s Adam’s as well: “This is my favorite Taking Back Sunday song.” Adam delves into some very personal issues regarding his first engagement and a called-off wedding. It stings the soul with a tingling sense beginning with “When you took that ring off.” Make Damn Sure you check out “Better Homes And Gardens” live by Taking Back Sunday below.

“I know you see a lot of pretty little boys up here swinging this mic but no one does it like daddy does.” It’s common knowledge that Adam is a master mic swinger. If there was a degree, he’d have a goddamned Doctorate. Tell All Your Friends that I’ll forever hold these lyrics in my head and heart as one of the greatest lines of all time, “The truth is you could slit my throat and with my one last gasping breath, I’d apologize for bleeding on your shirt.” For old times sake, check out the video for “You’re So Last Summer” featuring an appearance by Flavor Flav. Yeah Boyyy!

My immediate thought when I left HOB was “Holy shit, I’m so exhausted.” It felt like that time I saw Thursday co-headlining with Thrice back in 2003. Yeah, we’re that old.

The truth is, Bert McCracken never gave up. Adam Lazzara never gave up. They may have been beaten, torn down, spat on, kicked, punched, fucked over, but they didn’t give up because they had me. They had someone who believed. The Used and Taking Back Sunday are bands that will always be there for me, just like I will always be right there for them. They are a part of me. As I am a part of them.

Sunday night, my 17 year old self and I would have agreed this is Where You Want To Be. We would have sang just as loud, he may have moshed a little more than me, but I would have paid closer attention than he. Closer attention to the experience, to the details of the night, to documenting them and remembering them. With the understanding that yes, I am getting older, and I may never see these bands again but I’ll always believe in them. I’ll appreciate those moments and try to share them with others so maybe, just maybe, they can appreciate them too. So here I am, A Decade Under The Influence, a little more observant, and still a believer.