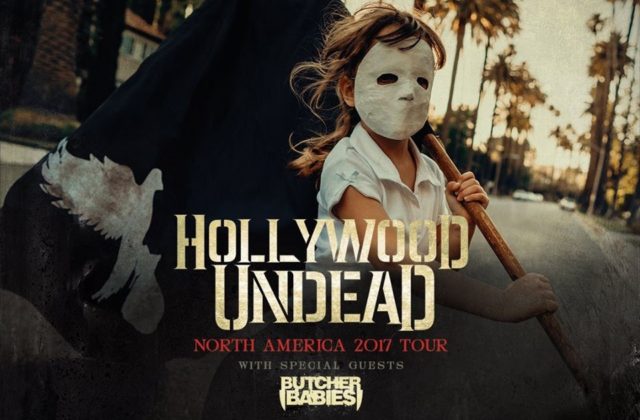 Enter below for your chance to win! Thank you, No Clubs!

EDITED OCTOBER 3 AT 3:00PM: Due to popular demand, the show has been moved to Jannus Live. aLL Tickets will be honored at the new venue and tickets are still available. 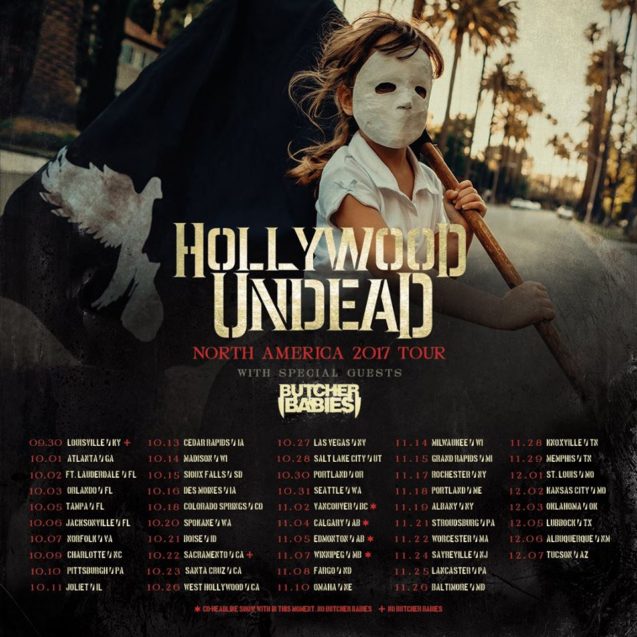 All of the band members in Hollywood Undead use pseudonyms and wear their own unique mask, most of which are based on the common hockey goaltender design. The band members currently consist of Charlie Scene, Danny, Funny Man, J-Dog, and Johnny 3 Tears. Hollywood Undead will release their new album, V, on October 27 (pre-order HERE). “We’re five brothers, and this is our fifth record,” says vocalist Johnny 3 Tears. Guests on the album include B-Real of Prophets Of Rage/Cypress Hill on the album track “Black Cadillac.”

Check out the video for the new single “California Dreaming.”

Butcher Babies are a heavy metal band from Los Angeles, California. Frontwomen Heidi Shepherd and Carla Harvey, guitarist Henry Flury (Amen), bassist Jason Klein and drummer Chase Brickenden make up the band. Their debut album, Goliath, was released on July 9, 2013 via Century Media Records. It sold 3,300 copies in the US during its first week of release and charted at No. 3 on the Billboard Heatseeker chart and No. 112 on the Billboard 200.

With In This Moment, Of Mice & Men & Avatar:

Want to WIN 2 TICKETS to Hollywood Undead and Butcher Babies at State Theatre in St. Petersburg, FL on Thursday, October 5, 2017?! There are several ways to enter!*

EDITED OCTOBER 3 AT 3:00PM: Due to popular demand, the show has been moved to Jannus Live. aLL Tickets will be honored at the new venue and tickets are still available.