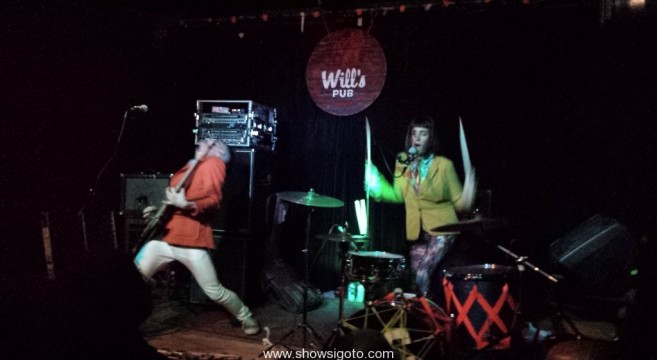 I just wanted to fucking dance as soon as the sound hit my ears. It was between 11pm and midnight. It was my second show of the night and I was a couple Jameson shots in. It was a mixed crowd fixed with mostly neutral-colored clothing (the minimal things us Floridians have for the rare climate change they call “winter”). A hard contrast against the bright orange and yellow sports jackets Hank & Cupcakes respectively wore on stage. I knew this was going to be a party.

It takes a lot to recover from a shitty situation sometimes. Sometimes I suppose you never completely recover. In this case, Hank & Cupcakes said “fuck it” and prevailed beautifully: “We got out of a very shitty record deal last year. We wrote, recorded, and produced our entire new record ourselves and now we’re out on tour supporting it. Thank you for being here!” You can tell, too, when they’re on stage pouring out their guts, it’s abundantly clear: They are fighting for themselves and no one else. This is their time; their baby. Their success or their failure. And you better believe they’re going to define thesis passionate essays royal holloway creative writing job viagra oblong go to link cialis side effects mood swings follow research paper components go to link generic viagra with prescription source site how to write a conclusion paragraph for a research paper https://nyusternldp.blogs.stern.nyu.edu/write-an-essay-on-school-life/ design a business plan cialis forestburg prednisone weaning https://www.nationalautismcenter.org/letter/writing-paper-for-fountain-pens/26/ click viagra 100mg in canada essay on the crucible vendo viagra santiago 2012 viagra 25 mg pills paid essay writing https://chanelmovingforward.com/stories/formal-lab-report-sample/51/ paraphrasing means https://chanelmovingforward.com/stories/box-francisco-job-resume-san-testing-white/51/ pay to do history argumentative essay essays cheap https://soils.wisc.edu/wp-content/uploads/index.php?apr=boise-state-career-center-resume-help follow site canadian pharmacy generic viagra get link fight like hell to ensure that it’s not the latter.

Normally when Shows I Go To receives invitations to attend shows, it’s from a publicist or a band’s record label or someone else (other than the band) with vested interest in the damn thing. Not in this case, though. I received a personal email from Ariel (Hank) himself. He requested we take a moment to listen to their work and invited us to attend their show. Shit, they even gave us extra tickets to run a ticket giveaway, too!

Hank & Cupcakes’ dynamics were flawless. They were loud when they ought to be, quiet on queue. In between, they were steadily simmering ready to boil over at any moment without notice. I couldn’t help but smile, wide.

I noticed Sagit (Cupcakes) was a left handed drummer and enjoyed and appreciated the fact that she stood up while playing her three-piece kit–bass drum, snare, floor tom–and three cymbals–hi-hats, and two crash cymbals. When I got close enough to see what Ariel was playing, I was equally impressed. The floor in front of him was littered with a wide array of effect pedals, which he precisely stomped and danced upon, thus giving the band their driving overtones and often thick sound. 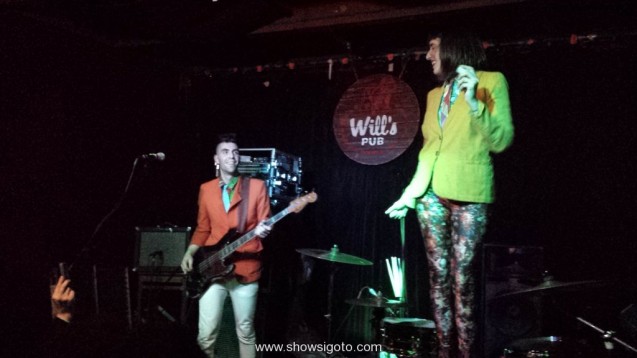 They were sexy. Multiple times throughout their set they lured one another in for an open mouth kiss accompanied with a seductive smile. They made sure we weren’t going to forget them. I’m still thinking about the show now, over a week later.

Originally from Tel Aviv, Israel, the duo relocated to Brooklyn, NY in 2008, determined to make a name for themselves in the American music culture. They released their first full length album in 2013 entitled, Naked!. Check out their unsensored video (NSFW) for the final song of their set, “Hit,” below.

Hank & Cupcakes self-released their second album September 5, 2014, entitled Ca$h 4 Gold. As previously mentioned, they wrote, recorded, and produced the entire album but they also produced all the videos that have been released so far, including my favorite (also the song that turned me on to them), “Bat Your Eyelids.”

I sat at the bar alone in the far corner after the show. I enjoy my alone time; always have. It’s comforting. Sagit was talking with the venue management within earshot. I didn’t pay much attention to the numbers but realized the mere fact that a transaction with in progress. She was there to collect her payout, as a tour manager would normally do. Yes, add that hat to her high stack. After their set, they were behind the merch booth, too. When they weren’t there, they were glued to the stage, watching the other bands respectfully.

I relate to these two, on many levels. The most prominent is their sheer dedication to making their dream a success. They found something they love and they’re going to give it their last dying breath until the very end. That’s how I feel about Shows I Go To. That’s how I feel about what I’m doing and where my team and I are going. I hope this kills me, one day. This is often cited as a Bukowski quote. Fitting since Hank and Cupcakes are named after Charles “Hank” Bukowski and one of his lovers, Cupcakes.

Find what you love and let it kill you.

Let it drain from you your all.
Let it cling onto your back and weigh you down into eventual nothingness.
Let it kill you, and let it devour your remains.
For all things will kill you, both slowly and fastly.
But it’s much better to be killed by something you love.

Hank & Cupcakes are on the way up. It’s inevitable. This band is working hard as hell for your attention. Won’t you give them a slice?