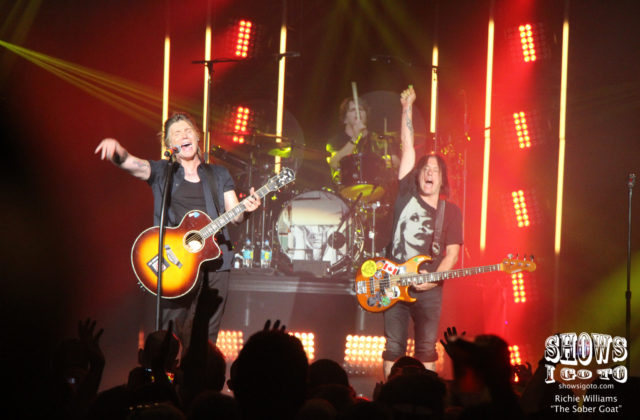 Ahhhh, the Goo Goo Dolls, another band I first got into during the early-mid 1990s which I had yet to see live. Since the 1993 days of A Boy Named Goo featuring my favorite Goo song “Long Way Down” (also featured in the 1996 blockbuster drama disaster film Twister – so good btw), I’ve been listening to this rock band but somehow never made the effort to see them live. Alas, the time finally came for me to cross this four-time Grammy-nominated rock act off my bucket list. Sure, their sound and persona over the years shifted a little towards the pop side, but they still know how to put on a good rock show.

Unlike the previous show I went to a few days before, tonight I was graced with a +1 in my press approval. After two failed attempts to drag a friend with me to the show, I got lucky on friend #3. My buddy and fellow Shows I Go To staff partner, Garrett, meets up at my place and we set sail for Universal Studios.

We park on the top of the parking garage and enjoy an awesome glowing sunset as we make the long trek to City Walk. We stop in the NBC Sports Grill & Brew restaurant for a break and enjoy a strong beer inside bar, taking advantage of the air-conditioning. We then wind our way through more tourist pedestrian traffic and eventually arrive at the Hard Rock Live.

We walk in and the opener, Phillip Phillips, had already hit the stage to open up the show. I’ve never heard of them but I thoroughly enjoyed what I heard.  Garret goes on to inform me during their set that Phillip Phillips is a singer, songwriter and musician who won the eleventh season of American Idol in 2012. I would have never known. His coronation song, “Home,” became a huge staple hit. His debut album The World from the Side of the Moon was released on November 19, 2012. His second album, Behind the Light, was released on May 19, 2014. With a full band, they had put on a fun performance that gets the crowd nice and ready for the main act.

By the time their set is over, Garrett and I start going beer for beer, and we make solid progress during set break. I abandon him when the lights dim and I make way to the left side of the stage toward the photo pit entrance.

Here is where the bullshit starts.”

In the press confirmation email I received, it clearly says photographers are allowed in the stage pit for the first three songs, per usual. Well, the security guard on the left side of the stage looks at me like I’m crazy when I approach. After some inaudible yelling, he lets me through the gate but says photographers are not allowed in the front pit and says I can shoot from the right side where we’re standing. I’m dumbfounded but go on to shoot from the left side of the pit for a song, since I’m already here. I migrate all the way to the other side only to get even more confused looks from the security guards over there. A lady tells me the same thing, that photographers not allowed in the pit tonight and must shoot from the back middle bar area. No one had told me this. I get my shots from the back middle bar, then get two beers and head towards Garrett. I settle into the back middle of the floor, right in front of the soundboard, the sweet spot. John Rzeznik (guitar, lead vocals) really knows how to frontman the stage like a boss. He went on a political rant at one point, but he was perfectly validated in times like these, and he kept it short and sweet. Also, I was half hypnotized throughout the set. I wasn’t expecting a huge lighting rig, but they had a nice light show.

Check out this Instagram clip of “Slide” from The Sober Goat.

So, may I remind you and direct your attention to the first paragraph… I was here to hear one song: “Long Way Down.” I’m not currently up to speed on Goo Goo Dolls info, so when I looked at prior setlists and saw “Long Way Home” at the end, I got excited because I mistakenly read “Long Way Down.” Needless to say, when the time came, I was a little disappointed. I didn’t get my song. I felt bamboozled, hoodwinked even.

But, it was my mistake. Hey, how about we play it now?!

They did play a track from the A Boy Named Goo album, the soft and lonely “Name.” Everyone else in the crowd got their “Slide” or “Iris” or whatever else. Oh well.

Anyone want to watch Twister and chill?