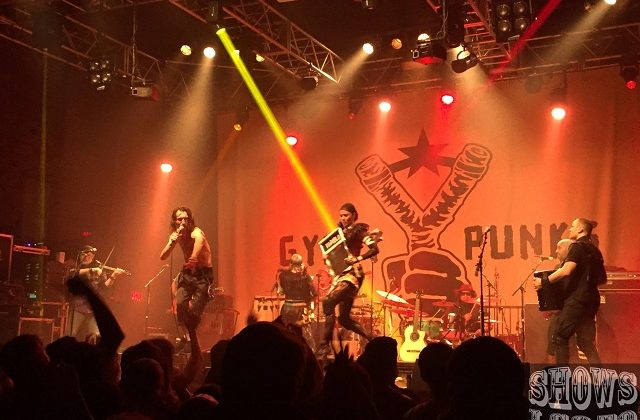 I knew this night was going to be one to remember. It was supposed to be that way as a result of a long-awaited show. Gypsy punk rockers Gogol Bordello rolled The Beacham on Saturday, June 11, 2016, for a sold out show with special guests Frank Turner & The Sleeping Souls and Walter Schreifels (Gorilla Biscuits, Youth of Today, Rival Schools) opening up the show. However, this show wasn’t the only thing that would be happening in the neighborhood that weekend.

The night before, our town, our home, was attacked. I did not do much of anything Friday night — went out to dinner and came home. I woke up Saturday morning to discover terrible news. One of my favorite live music venues was the site of an unthinkable act. I couldn’t believe the headline when I saw it, and then I couldn’t believe what I was reading. A gunman had killed former The Voice contestant Christina Grimmie while signing autographs after her concert at The Plaza Live in Orlando on Friday night. Grimmie was performing with the band Before You Exit. While it’s not the type of show I would have particularly been at, I’m at the plaza at least once a month. So when this sort of thing happens somewhere you go to — a lot — it hits home. It’s natural to feel scared, confused, angry, and unsafe, but no one can take our home away from us, and they can’t take away the shows I go to. I would soon be in the heart of downtown Orlando at The Beacham for a sold out Gogol Bordello show, which was amazing, as expected. I scored some Gringo Locos tacos on the way home and fell asleep on the couch watching the Bonnaroo webcast. Fun safe night, or so I thought. I woke up Sunday morning to hear about the Pulse shootings. I was floored in disbelief. Another shooting, this time at a LGBT night club on Latin night. A man gunned down 49 people and after a three-hour standoff with people held hostage inside, police crashed into the building and killed the man in a shootout. While I have never been to Pulse, it’s in my hometown, my neighborhood. So many people lost their lives and were injured all while having a good time at fun, carefree places, and many more are directly affected whether their family, friends, or first responders. This is not why I thought this weekend would be remembered, but we must persevere and move on, and Gogol Bordello was there to be a happy highlight in a very shitty weekend. Gogol Bordello isn’t your ordinary band. Imagine polka cabaret music on punk rock and dub rock steroids, being mainlined to a crowd full of people jumping and dancing free-spiritedly in a constant unison (if you’re on the floor, you’re moving whether you like it or not). They play to provoke every person that they make contact with — whether it be on an album or at a live show. Singer/guitarist Eugene Hutz knows how to work the crowd and lead the band, playing his multiple acoustic guitars while other members of the band add accordion and violin to create that magical gypsy sound all while conducting a theatrical stage show. Hutz founded the band in New York City in 1999 after leaving Ukraine in the aftermath of Chernobyl. “Gogol” comes from Nikolai Gogol, a classical Russian-Ukrainian writer who served as an ideological influence for the band. He was a troubadour who “smuggled” Ukrainian culture into Russian society. “Bordello” in Italian refers to a brothel or a “gentleman’s club.” I first found out about Gogol Bordello at Bonnaroo 2008. It was the Superjam hosted by Les Claypool (of Primus) and was to include mystery special guests. After over an hour of storm delays, the Superjam finally started around 2:00 a.m. Les comes out on stage with a bunch of old European guys and I was dumbfounded. Who were these dudes? The Superjam set featured Les and Gogol covering nothing but Tom Waits songs in their own unique way. The next day, I saw my first Gogol Bordello set in the hot afternoon sun and was completely blown away. I saw them a year later at Club Firestone in Orlando. That was the last time I had seen Gogol. I think they came through Orlando once or twice since then, but naturally the stars weren’t in alignment for me being able to attend. But, life didn’t stop me this time from going to see one of the most exciting live performances ever from one the greatest and most unique bands I know. This was just the show I needed and I didn’t even know it. I bounced around that floor all night, and if you were in the front half of the crowd, you were moving to some extent, whether you were dancing on your own accord or getting bumped into by either a group of friends with their arms around each others’ shoulders dancing in circles, or some drunk buffoon casually making his way through the crowd with no regard for whoever he leans on. I ain’t mad at cha. I was all smiles, especially when security showed up after only ten seconds and escorted said buffoon to the curb. Gogol shows are a wild party for all ages, topped off with the punkiest violin and accordion you will ever experience. You sing, you clap, you dance, you shout. Each member contributes like champs to their craft, producing an amazingly entertaining, and amusing, gypsy punk sound. It’s non-stop energy from the band and the crowd.

Check out my highlight video below, which includes “Not A Crime”, “Immigraniada” (We Comin’ Rougher) and “Wanderlust King.” And below that is my Persicope live stream video via Twitter of “Start Wearing People.”