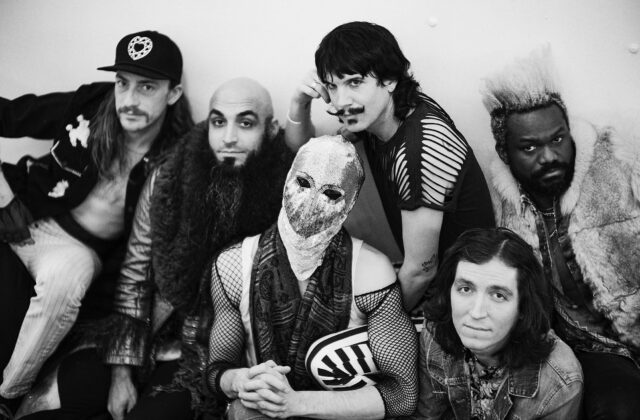 Foxy Shazam have one of the coolest rock sounds I’ve ever heard, with a retro-vibe that sounds perfectly at-home in this modern world. Shows I Go is your hookup for tickets for the show May 18th, 2022 at The Orpheum (GET TICKETS HERE)! Foxy Shazam got together back in 2004 in the Blue Chip City, Cincinnati, OH. Initially forming as the nu-metal group, Train of Thought, the band changed their name to Foxy Shazam and started playing a more glam/pop style of rock and roll. They released their first album, The Flamingo Trigger in 2005, and followed it up with 2007’s Introducing. By 2008, they were on Alternative Press’s “100 Bands You Need To Know,” and touring with bands such as The Darkness, The Fall Of Troy, The Sounds, and many more. Over the next couple of years, they released three more albums, before calling a hiatus on the band in 2014. The band then got back together in early 2020, right before COVID started, and finally are able to get back on the road!

If I had to describe Foxy Shazam, it would be the best parts of T.Rex and Queen decided to time warp into the future and hooked up with the theatricality and modern acumen of My Chemical Romance or The Darkness. With screeching guitars, over the top lyrics, and some of the funnest, danceable tunes this side of Dallas. If I had one song pick, it would definitely be “The Holy Touch,” off of 2012’s The Church of Rock And Roll. It’s just such a fun, Meatloaf-esque jam that just shows off all of their amazing qualities:

Another favorite has to be “Teenage Demon Baby” off of their self titled 2010 album. This likes to bounce between Meatloaf and FUN. and the lyrics are just so much fun:

If you haven’t guessed it, yeah, I’m pretty jealous that Florida is getting this ever so awesome band to roll through. There just aren’t many bands out there that just sound like this anymore, so to get the opportunity to see them at such an excellent venue like The Orpheum in Tampa just sounds like a bit of heaven. Make sure you get your tickets soon, as May 18th is coming and you don’t want to miss out!