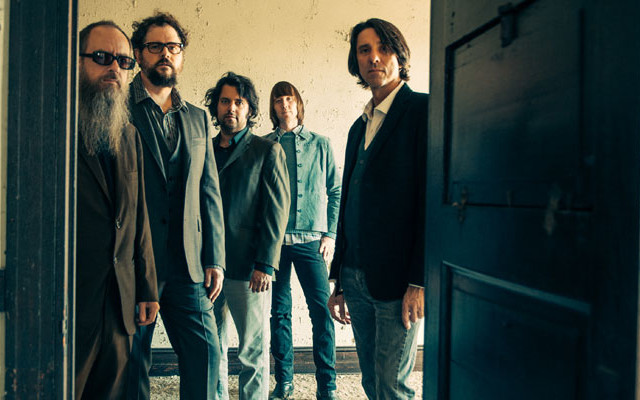 To camp on the banks of the Tennesseee River in Muscle Shoals, AL is to feel why that ground has proven so fertile for producing music. To take the experience further and visit FAME studios — where the likes of Wilson Pickett, Duane Allman, and Percy Sledge recorded some of the best and most beloved soul music ever — to sit at the piano where Aretha Franklin once sat, is to be immersed in a steep vat of quality that has been reproduced in few places throughout history.

FAME’s legendary session players, The Swampers, included David Hood on bass. His son, Patterson, would go on to form one of Southern Rock’s most innovative and longest tenured bands, Drive-By Truckers along with fellow badass, Mike Cooley. Twenty years later, the Genesis of the Truckers’ upbringing is apparent in their soulful brand of rock.

Cooley and Hood play straight and hype man respectively. Each is a genius songwriter in his own right. But the synthesis of the two, playing their special brand of rock, puts the show-goer in the enviable position of craving a half dozen whiskeys while also not wanting to pry their eyes and ears from the stage.

Fortunately, I have restless friends who braved the lengthy beer line several times; the evidence of those trips became more and more apparent with each song listed on our attempt at a handwritten set list. The Truckers treated The Plaza Live to a night heavy on older favorites. Patterson appeared with “Tornadoes,” a song that taught this Florida boy about the fact that the storms “sound like a train.” Cooley followed with “A Ghost to Most,” and the stage was set for the two geniuses to swap turns at the helm for the next few hours.

Then they played a Van Halen song. A lot of bands would have lost their audience at that. Hell, I was tempted to hit the head then. But when you love a band, you’ll give them more time. Like family, you’ll hang on out of trust that they have your best interest in mind.

DBT repaid our patience. Van Halen is a bit silly in my mind. There was nothing silly about Van Hood. DBT made eighties pop metal sound really cool. And we were thankful to have stuck out the effort. The next eight tunes were mostly early 2000s Truckers originals that pleased the crowd.

A Truckers crowd is almost always rowdy. Tonight was consistently that. We usually go in expecting Hood with his long winded by tales of Southern justice, heartache, and love; and Cooley with his one liners to punctuate otherwise heartbreaking tunes about lost opportunity and the realities of growing up poor in the South. The former was not exactly what we are used to. The latter set the tone.

DBT’s latest albums feature more Mike Cooley tunes than any of their previous efforts. Hood and Cooley each bring their own approach, both on stage and on wax. Tonight felt like a shift toward a more balanced DBT. Patterson still told his stories — always wonderful. But, the set list was split about 50/50 between the two. Cooley’s increased presence on record seemed to carry over to the stage.

If you haven’t yet, go get the new record, English Oceans. While you’re at it, pick up Southern Rock Opera and Decoration Day and Go-Go Boots. Hell, grab the whole catalogue along with the boys’ solo efforts. And if you haven’t seen them live, make it a point next time they are in town. Two incredible guitarists and songwriters, whom could front their own great bands if they wanted, working together to create an experience that is part examination of the “Southern Thing,” part rock show, always first class.