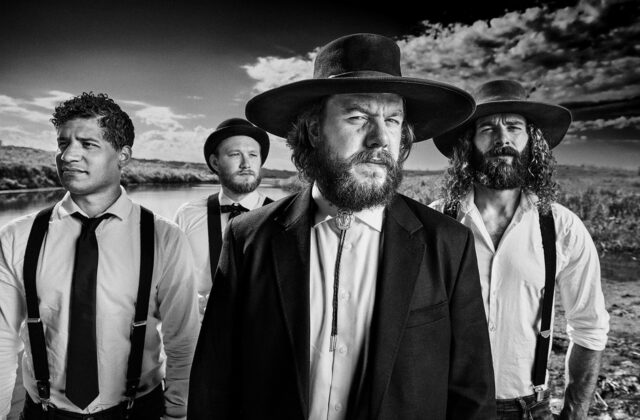 Stepping out of the saloon with my spurs on my boots, I walk to the center of the road. The burning hot sun is straight overhead and townsfolk hurry to close their doors and windows. No sign of the lawman means we are good to go as my back meets my opponents. Ten paces each and I quickly turn to un-holster my firearm. Look out Florida! The Dead South’s “Served Cold Tour” featuring The Reverend Peyton’s Big Damn Band is coming to Jannus Live in St. Petersburg on Wednesday May 11th (GET TICKETS HERE) and the Orlando House of Blues on Thursday May 12 (GET TICKETS HERE!). “Mumford & Son’s Evil Twins” have a wagon full of western pioneer folk music for you! Their dark, gritty approach won them the 2019 Canadian Independent Music Award for Group of the Year! Dead South’s twisted bluegrass has been featured in several television dramas including The Umbrella Academy and American Gods. The Saskatchewan, Canada collective was formed in ‘12 and has three studio albums to their name. The best of the bunch is ‘14’s Good Company, which contains hits like “Long Gone” and “In Hell I’ll Be Good Company.”

In addition to The Dead South, Florida music fans will hear the country style blues from The Reverend Peyton’s Big Damn Band. A three piece from Brown County, Indiana, Reverend Peyton’s have released ten studio albums and have huge hits like “Pot Roast & Kisses” and “Something for Nothing!” They just dropped a brand new album this week titled, Dance Songs for Hard Times. It features vocalist and supreme guitarist Rev. Peyton singing about financial struggles and relationship troubles as he pleads with his higher power.

Jannus Live is an open courtyard in Downtown St. Petersburg that houses a huge stage and bigger sound. VIP balconies and suites are available, but the floor is awesome with plenty of points of sale for your refreshments for the evening.

Located at Disney Springs, the House of Blues is surrounded by awesome restaurants, bars and shopping opportunities. The venue itself features a pit with some viewing areas on either side of the sound booth. Plenty of points of sale for those interested in libations or grub on this most important night. There is a balcony that features a VIP area for fans who want table service and an outdoor space for smokers.