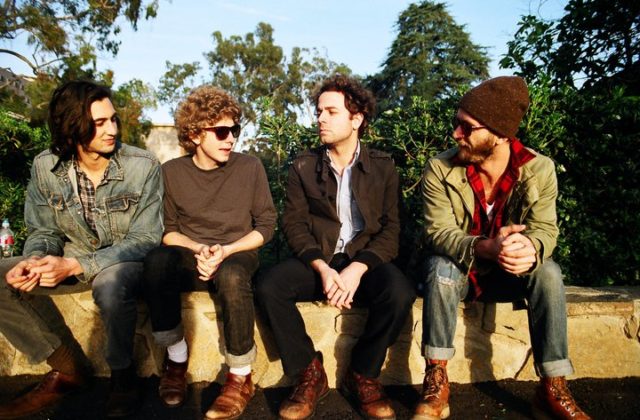 You’ve got to be flat out shitting me…DAWES. Thee DAWES…at The Social?! Originally booked at the bigger sister venue The Beacham, Dawes made me almost believe in God on Tuesday, twice. Once, when I found out the show was moved to The Social, (all music fans gleam at the opportunity to see their favorite artists up close and personal.) The second time Dawes made me question my faiths’ upward mobility was from the moment I stepped into the venue and saw them kicking ass.

[Anecdotal Warning:] I actually fell on my fifth step into the venue. It was crowded, dimly lit, and I was in the early stages of a very happy drunk. My eyes and feet miscommunicated for a moment, as they so often do. Forward momentum then turned into downward momentum as I kicked the lip of the sound booth stage and fell down with a minimal amount of grace normally associated with clumsy drunk motor skills. I FELL HARD AS SHIT.  And now I’m at a day job leaning keenly on my left cheek; working on my not day job.

Dawes at The Social in Orlando, FL

Dawes is comprised of two brothers, Taylor (Vocals/Guitar) and Griffin (Drums) Goldsmith and Wylie Gelber on bass. Duane Betts, the band’s touring guitarist, is the son of Dickey Betts, who just happened to, oh, I don’t know, be in THE ALLMAN BROTHERS BAND. Yeah, it’s all starting to make sense. Albeit, Duane is only a member of the touring band, he adds quite an amazing guitar presence any blues lover would warm right up to. Dawes, at it’s core, is Taylor, Griffin, and Wylie who formed this band after their former band, Simon Dawes, experienced some commercial success but eventually split up.

The songwriting across Dawes discography is absolutely brilliant. The lyrics are always scarily relatable and relevant, (get out of my head Dawes) while remaining accessible to any demographic willing to listen. The Social was packed with all ages (18+), and absolutely belting back the words louder than Dawes could perfectly harmonize them. I love seeing a rock band execute three piece harmonies and these boys do it beautifully, and often.

I would really appreciate it if the boys from Dawes would score my life in three parts like in a movie when something bad is about to happen. They could hit some scary, ominous three part chord and I would be super aware of some bad shit about to go down. Then, when something good happens, they just bust out in, “WHEEEHEHEN MY TIIMEE COOOOMMMESSS OOOOH OOOWHOA.” And I would be like, “Hell yeah! I’m about to get laid” or successfully return something without a receipt. I don’t know, whatever is cooler.

Undoubtedly due to their L.A. roots, Dawes has a certain 70’s Laurel Canyon vibe that almost reminds you of The Eagles when you close your eyes. I hate making comparisons and even if that is a reach, so be it. See these dudes live and be blown away by the retrofitting, western blues rooted musicianship that has become a personal obsession of mine. Somehow manages to pull it together for a shot of the dudes themselves.

If you have a chance to see a special artist on a Tuesday night in your favorite hometown sticky floored, booze infused venue; do it.  Do it every single fucking time; even if you bust your ass in front of 300 of your new best friends (like me), even if you have to wake up at the asshole of dawn just to get to work to pay for your excessive bar tab … Music has never been about playing it safe or going to bed early. Music has never been about spending money or getting invincibly trashed, (okay, kinda, sorta about getting invincibly trashed.) It has been, and will forever be, about the shared experience between artist and fan; the emotional, ethereal exchange that in some strange sensual way connects us all as a single entity. There is nothing else like experiencing live music on this planet; getting lost within a performance creates an internal chemical ecstasy far stronger than anything you can make in your fraternity brothers dorm room the night before Ultra, after having stayed up all night the previous night because Afrojack, or some other idiot, played a 12 hour deep house trance set at some bar where drinks are $92 and you took enough molly to kill a baby horse and all you were was colors. Yeah.