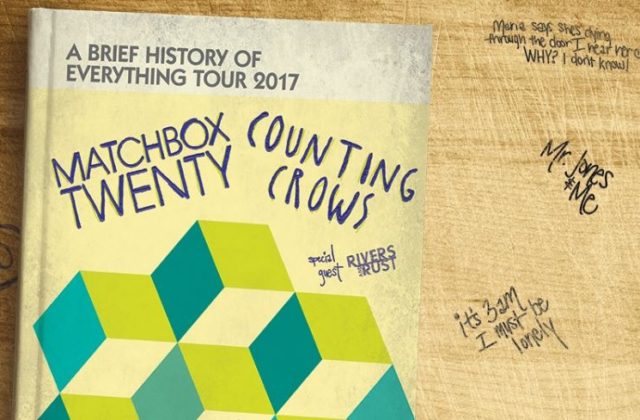 As the summer gets hotter and hotter, so do the acts that come our way! Just announced is Matchbox Twenty and Counting Crows on the “A Brief History of Everything Tour.” This 42-stop nationwide tour has a three pack of options for all you Florida fans: August 15th in Tampa at MidFlorida Credit Union Amphitheater (ticket giveaway); August 16th in West Palm Beach at Perfect Vodka Amphitheater; and August 19th in Jacksonville at Daily’s Place. These are two of the biggest bands in alternative rock from the 90’s until today. I’m not sure I have to say anymore for you to be interested! However, I will continue with a persuasive preview for those who aren’t too familiar. ENTER BELOW TO WIN TICKETS! Matchbox Twenty is the bee’s knees. Literally, already delayed by bees on this tour, MB20 won’t be detoured. Formed here in Orlando, Florida in 1995, they went 12x Platinum (Diamond) with their ’96 album, Yourself or Someone Like You. Led by singer Rob Thomas, Matchbox Twenty also features Kyle Cook on lead guitar as well as Brian Yale on bass and Paul Doucette on drums and guitar.  Hits like “Push,” “3am,” and “Back 2 Good” are the reason to come out and see the awesome and still stellar Matchbox Twenty.

Counting Crows will be joining MB20 on tour and what a combo. Counting Crows was formed in 1991 in Berkley, CA.  Adam Duritz leads the way with out of this world vocals and has a twang that makes you feel right at home. Also in the band is David Bryson (guitar), Charlie Gillingham (keys, accordion), Dan Vickry (lead guitar), David Immerglück (guitar, banjo, mandolin), Jim Bogios (drums, percussion) and Millard Powers (bass guitar). Their 1993 debut album August and Everything After sold 20 Million albums worldwide and featured their huge hit: “Mr. Jones.” Needless to say, this group will bring all the feels to what will already be a rockin’ show!

Want to WIN 2 TICKETS to Counting Crows & Matchbox 20 “A Brief History of Everything Tour” in Tampa, FL on August 15, 2017?! There are several ways to enter!*

Want to check out two of the biggest bands in alternative rock from the 90’s until today? Matchbox Twenty 🔥 and Counting…