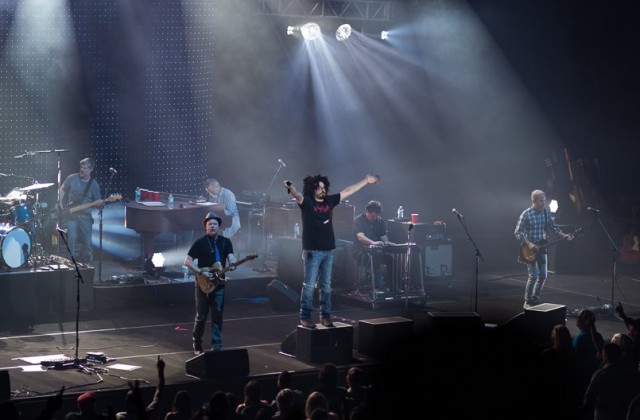 Every now and then we all find that band we connect with from the first few seconds. For me, Hollis Brown is one of those bands. In early July, I stumbled upon the video for “Sweet Tooth” from the band Hollis Brown. I immediately checked the show calendar to see if they would be playing any shows around here soon. They were playing a headlining show at Will’s Pub near the end of July but unfortunately I had prior commitments that I couldn’t break. Lucky for me, they were playing a show with Counting Crows and Citizen Cope a few days later at Ruth Eckerd Hall in Clearwater. It was going to be quite a trek but  I knew it would be well worth it.

Our photographer Vanessa and I left my house three hours before showtime. It was only supposed to be an hour and a half drive but due to traffic and rain it took us nearly three hours. We pulled up to the venue with only five minutes to spare until showtime so Vanessa jumped out of the car and ran towards the entrance to make sure she was inside in time to shoot for Hollis Brown. I parked the car and made it to my seat just in time to see the band hit the stage.

If Hollis Brown’s job was to get us pumped for Counting Crows and Citizen Cope, they succeeded by rocking harder than any band on the bill. The band tore through some of my favorites from their newest album, 3 Shots like “Wait For Me Virginia,” and of course “Sweet Tooth.” One of the evening’s best moments came when Hollis Brown played their Bo Diddley collaboration “Rain Dance,” a song they completed from old Bo Diddley tapes at the request of his estate.

After the Hollis Brown set, I went over to the merch booth and introduced myself to singer Mike Montalli and told him how much I enjoyed the show. He said that if I could wait around for a few minutes he would come hang out with me for a bit. We talked about what an honor it was to be approached by the estate of Bo Diddley to complete his song and how much fun he had playing it each night. I asked about how their collaboration with Nikki Lane came to be. It turns out that they are good friends and he had written the female part with her in mind. As we parted ways I couldn’t help but feel honored that he would take a few minutes to talk and answer a few questions.

Citizen Cope took the stage next and it was exactly the amount of chill I needed after Hollis Brown’s amazing set. I had never seen Citizen Cope perform live before, so seeing him with a full band was a real treat. The band was amazingly tight and sounded great accompanying Citizen Cope’s songs. Citizen Cope played a forty-five minute set of hits and fan-favorites helping to mellow out the crowd before Counting Crows had us crying our hearts out. There wasn’t much crowd interaction but none was needed. He was one with the music that night and we all felt it.

Counting Crows have been a favorite of mine since high school. I can remember sobbing along with Adam Duritz listening to August and Everything After after every break-up. This was my fourth time seeing Counting Crows but the last time I saw them was in 2002 (It was my first show ever at House of Blues Orlando).

They opened with “Round Here” which for many of us was our introduction to Counting Crows over twenty years ago. As much as I wanted to sing along, Duritz made it nearly impossible by changing the song drastically from the album version, sometimes even singing completely different lyrics. What followed was a night of classics as well as new cuts from their most recent album Somewhere Under Wonderland.

Adam Duritz is known for making every Counting Crows show feel like an episode of VH1 Storytellers, often taking time in between songs to explain how they came to be. He told the story of how they wrote six songs for Somewhere Under Wonderland in just seven days providing one of the best introductions to a song ever:

I pooped a lot of lyrics that day and this is the first song I crapped out.”

To round out the night, Adam Duritz got behind the piano, finishing the set with one of their biggest hits, “A Long December”. The band soon returned to the stage to give us a three song encore of fan favorites that featured a sweet rendition of “Rain King” unlike anything on the album.

As I look back on this night six months later, I am still amazed at the amount of talent on this bill. All three bands were completely different in style but they managed to come together to give us a night of all around great music. Citizen Cope’s peaceful vibes mellowed us out, Counting Crows reminded us how to love, and Hollis Brown brought us that sweet, sweet Rock and Roll.