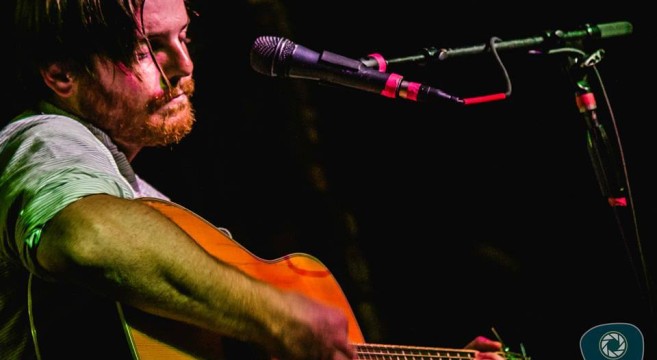 Jacksonville based Fjord Explorer’s Pandora station is arguably the best non-pornographic thing on the internet. The playlist amounts to that station you worked for years to perfectly curate, thumbing down bands you don’t like, adding ones you can’t get enough of. The result feels like a handcrafted station for the quality inclined.

Connor Hickey’s songs are certainly folk songs. Passionate exposes about bitchy exes and drunken road trips. Hickey, and his brainchild Fjord Explorer, exude that most desirable of musical qualities–authenticity. He is smart yet self-deprecating. Funny, but not in a look-at-me sort of way. Clearly tortured by those same endearing qualities. All of that on top of being a genuinely nice guy.

Hickey’s gorgeous, painful set was interrupted early by a dude butt dialing some sort of hardcore music on Youtube. Hickey finished the song he was playing and politely asked for the distraction to cease. Hickey initially thought it was the house music. The music ended after much fumbling from the culprit, then he and his boys hurriedly and with great cacophony made their way out of the bar.

Hickey’s next song found him distracted, a reality acknowledged between songs. Naturally, he went to his blankie, a Neil Young song, “Hey Hey, My My,” that set his head right. The rest of the set was a tour de force. Hickey is the picture of a self-conscious artist. His songs are brilliant, his voice and playing wonderful. He delivers them with a chip on his shoulder. Three wonderful bands were to come, but Hickey was commanding the room.

What sets Connor Hickey apart from Cory Branan, Jon Snodgrass, or any number of really talented songwriters who make a damn good living playing small clubs across the world? Is it access? Desire? Money? This man’s music touches on deep recesses of our fears and hopes. He is at home singing an ode to his favorite beer (I-10) as he is grappling with the cancer that he fought at way too early an age (Luckiest Bastard- listen below).

Fjord Explorer’s Pandora station is compelling for a reason. It’s folk music, inspired by some of the greats in the game- Young, Jason Isbell, and, most recently, a heavy dose of Hank Williams among many others. You are not surprised with Radiohead or Sigur Ros comes on the station, followed by Arcade Fire, Bloc Party, or Band of Horses. The diversity and quality of Pandora’s analogs illustrates the depth and breadth of Connor’s songs.

Connor Hickey’s set was awkward, beautiful, and above all authentic. His voice enraptures–emitting the pain that inspires many of his tunes while maintaining a smooth listenability. Hickey’s brand of heartache goes down easy. Connor Hickey gave us what he is Friday night–a wildly talented, incredibly smart guy whose beautiful tunes do not fit neatly into an expectant box. He wowed us with his voice, lyrics, and playing. He frustrated us with his self-deprecation because he is just so damn good. He charmed us with all of the above.

Download Fjord Explorer’s album I Know I’m Awake on iTunes, Amazon, or emusic. Then, add a Fjord Explorer station to your Pandora account. North Florida is a bunch of lucky bastards that we get to hear Connor on a regular basis.