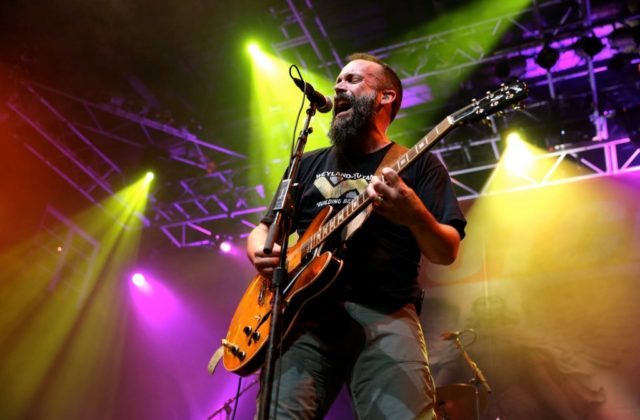 It was a night of straight up hard rock. Los Angeles based Kyng started the show off with a solid set of heavy tunes that set the tone real quick. They’re touring now to support their latest release, Breathe in the Water. It’s a polished record with a consistent sound which has mega-producer Machine’s thumbprint on it. Anything that guy works on sounds good, and Breathe in the Water is no exception.

Zakk Sabbath was up next. If you’re not familiar, they’re guitar-viking-in-chief Zakk Wylde’s three piece Black Sabbath cover band. With Blasko Nicholson (Ozzy Ozbourne, Rob Zombie) on bass and Joey Castillo (Queens of the Stone Age, Danzig, Eagles of Death Metal, Scott Weiland and the Wildabouts) on drums, this band burned House of Blues to the ground. I figured they’d be good, but they far surpassed my expectations. This band played the snot out of some of my favorite Black Sabbath songs. Of course, they played the mega-hits “Paranoid” and “War Pigs”, but they also played a few of my favorites: “N.I.B.”, “Fairies Wear Boots”, and “Into the Void.”

Wylde played several solos during the show which were nothing short of epic. One especially epic solo during “Children of the Grave” he started the solo onstage, and then proceeded (while never stopping playing) to jump off the front of the stage and walk deep into the crowd. He stood there soloing with the guitar above his head and backwards for what must have been at least 3-4 minutes. As he proceeded to return to stage, he was escorted through the crowd by a cluster of security members and guitar/cable techs frantically trying to keep his cable unhindered and trouble free. Zakk never broke stride the whole time. It might have been one of the most impressive performances I’ve seen. Blasko and Castillo were throwing down hard the entire time. They had to, since this one solo lasted a total of about 9-10 minutes. The band’s performance as a whole was nothing short of incredible, and with Sabbath being one of my favorite bands of all time, I found it to be entirely fulfilling. Psychedelic/stoner rock legends Clutch took the stage to a crowd that went nuts for them. It’s understandable, since the group released it’s first album, Transnational Speedway League, in 1993. They’ve been building their following for over two decades now with a discography of 11 studio albums and a vast amount of touring. As a matter of fact, I discovered them myself back in the late 90’s going to see some other heavy band play at House of Blues. (I’ve seen some incredible shows in this room over the years.) They happened to be on the bill too, so, after seeing them live, I immediately went and bought their self-titled album. I saw them a couple of times in the span of a few years and then…not again until this show. It’s cool to see a band blow up over time, especially when you saw them early on in their career. Back when I had originally seen them, they had only released two records. Now, they have 11 records and several live recordings. They played songs from a lot of different albums at this show and put a lot of fire into their set. Frontman/guitarist Neal Fallon was as energetic as ever and perhaps, even more animated than I had remembered him. The audience was rocking out pretty hard and many in attendance had that stunned smile of musical bliss on their faces. There were a lot of passionate fans in the building which made me happy for Clutch. The ability to be a functional band is not easy, and certainly not for such a span of time. The reward of surviving long enough to generate a deep catalogue is that there is a lot of material for fans to fall in love with and become attached to. These fans then show up at your gigs no matter what city you play in, and give their energy and hearts to you as a band. This show was no exception.