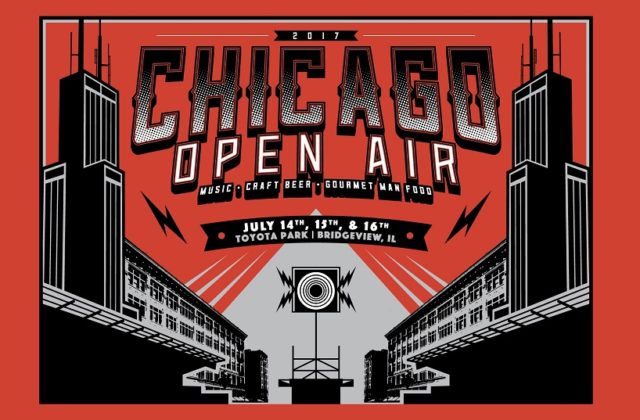 The amazing lineup of heavy metal, hardcore, thrash, and nu-metal at Chicago Open Air kept the crowd of 20K+ going strong all weekend.

Over 40 bands showed up to the Windy City, from the likes of Rammstein, Korn, Slipknot, Disturbed and many more. The setup was  impressive, with the main stage inside of Toyota Park and the second stage just outside of the stadium. That way, we are able to hope set to set without much downtime.

But the music wasn’t the only part of the experience. There was delicious food provided by Gourmet Man Food and tasty beers served up at the Headbangers Bier Hall. The inaugural Chicago Open Air fest showcased metal legends and up-and-coming bands alike, including a first-ever performance by Jim Breuer and the Loud & Rowdy.

The weekend forecast was looking gloomy with temperatures over 90 and rain each day, but the loud roars from the thousands of fans and the music blasting kept heavens tears away!

Warming us up on Friday where some great bands like Chevelle, Meshuggah, Hatebreed and Ministry.  Orlando’s own Trivium also kicked off the early afternoon, while Butcher Babies came in real hot with their Playboy-esque performance.

But the highlight of the night was the headlining Germans, Rammstein!  They put on a spectacular show filled with flames and explosions.  Open Air marked Rammsteins only US appearance in 2016.  At one point the lead singer poured a bucket of fire onto the stage while being lifted 20 feet up in the air.

Saturday was yet another day filled with great bands.  Nothing More put on a fantastic show as always, the best part of their set being when the whole band plays one big bass at once.  Beartooth, one of my favorite up and coming acts, got the crowd rumbling and it didn’t stop from there.

Alter Bridge and Pop Evil were a blast, while Gojira was a pleasant surprise for a band I hadn’t seen before. The lead singer/guitarist is amazing. Korn put on their usual kick-ass performance, debuting their song “Rotting in Vain” from their latest album The Serenity of Suffering. It was heavy!  Disturbed ended the night with a stellar show; Not as much fire as Rammstein, but they still lit up the night.

Sunday was jam-packed with some of my favorite bands and opened my ears to some new ones as well.  Gemini Syndrome played some cool songs and are now a staple on Sirius Octane radio.

Jim Breuer and the Loud & Rowdy put on my favorite performance of the weekend. They were naturals, smoothly tying songs together with comedy. I went to the merch tent and bought both of their T-shirts after the show.

All That Remains put on a great heavy metal show, and I was able to catch their new bassist in-action.  Unfortunately, Asking Alexandria had to cancel due to weather on the road, but fellow UK mates Bullet For My Valentine rocked it in their place. Huge shoutout to Slipknot for bringing the fire and putting on an amazing show, even after the loss of their bassist Paul Gray and lead vocalist Corey Taylor’s recent spinal surgery.

The rest of the weekend was one experience after another: Matt Tuck, lead singer of BFMV was spotted at the food stands getting brisket, Marilyn Manson put on a wasted, messy show per usual, and Five Finger Death Punch brought a 5-year-old girl on stage to sing—and she knew all the words!

The weather turned out to be not as bad as expected, with a little sprinkle here and there.  The crowd loved every second. Hope the second Open Air is just as fun and filled with killer bands, delicious food and tasty craft beers!